Is it possible to forecast ocean salinity 100 years into the future?

Current data are provided by the CORA dataset.

In addition to answers to the main question, there are a few more points I'd like to know:

Global salinity is the result of the balance between surface freshwater flux (evaporation minus precipitation), terrestrial runoff and mixing and advective processes in the ocean. The changes in salinity are intrinsically connected to alterations in the global hydrological cycle and are expected to be a consequence of climate change (Held and Soden, 2006). A general change has been identified with surface subtropical areas becoming saltier and high-latitude regions becoming fresher (Antonov et al., 2002; Boyer et al., 2005). Durack and Wijffels (2010) found salinity increases in regions dominated by evaporation while freshening occurred in precipitation-dominated regions. They suggested the change was a consequence of an intensification of the global hydrological cycle. These results are the basis for the conclusions in the IPCC 2013 report (TFE.1 Figure 1).

The global climate models that are used to evaluate future climate scenarios are calibrated to reproduce the past ocean and atmospheric conditions, which includes trying to match the described salinity trend. They likely constitute the best source of future global salinity estimates. Their ocean salinity forecast is based on the estimation of the global hydrological cycle evolution, especially evaporation, precipitation, river discharge and ocean mixing.

With regard to the quality of the salinity estimates, there is probably a large uncertainty associated with those fields. There is going to be substantial improvement in the quality of the salinity forecast because of the recent availability of better global salinity products. The remote data obtained from satellites (SMOS and Aquarius) have been providing a much better global view of salinity changes. Also, the ARGO profilers are expanding our understanding of the ocean interior.

In terms of evaluating uncertainty, I like the approach of Meier et al., 2006 looking at multi-model ensemble estimates. They combined down-scaled regional models with global simulations under several scenarios and provided several metrics for salinity uncertainties. The relationship between forecast errors and forecast horizons is quite complex and in fact represents an entire field of study. There is a lot of information in the IPCC 2013 report dealing with prediction quality, ensemble generation and size, and forecast quality assessment (for instance Chapter 11). 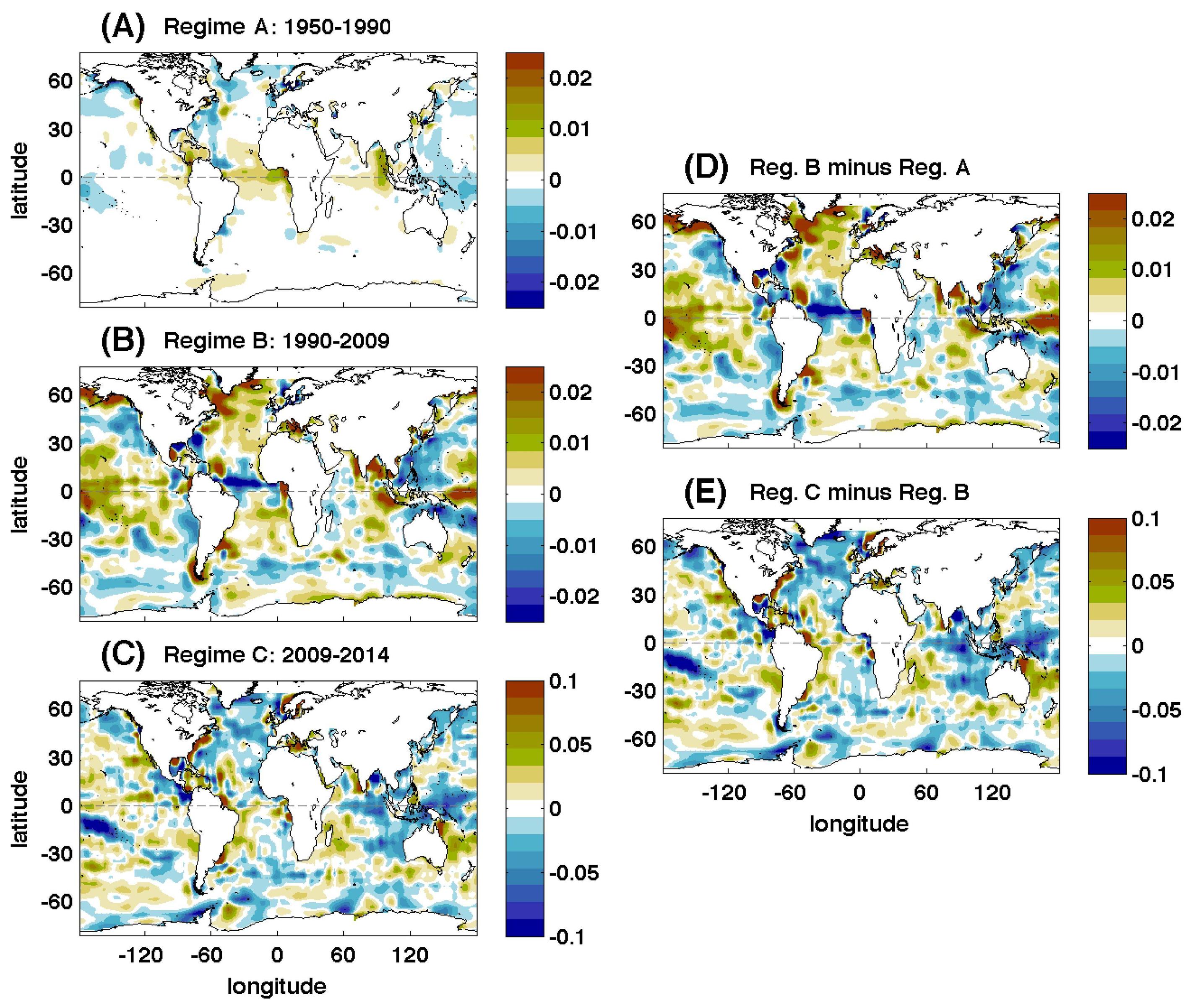 Using a little bit of self-promotion, I can also say that estimating what the current salinity trend from observations is a tough problem. In this recently published article, we show that the changes in trend are spatially complex and changing in time. We argue that, as mentioned before, the changes in salinity field give a good representation of the long-term changes in the global hydrological cycle.

Not the answer you're looking for? Browse other questions tagged climate-change oceanography salinity or ask your own question.

22
How is ocean salinity measured from space?
7
Why is ocean salinity not a good chronometer?
11
While desalinating ocean water, would it be bad if we didn't pump the brine back into the ocean?
5
How to determine the annual harmonics of temperature and salinity data?
15
Why is the sea salinity high in the Mediterannean and Red Sea and low in Indonesia and Malaysia?
0
How far do substances travel when thrown into the ocean?