Why is Earth's inner core made of an iron-nickel alloy?

This question has puzzled me for a while. I know that earth's mantle is made of different minerals, metals and rocks etc. and that has always made complete sense to me. But why is the inner core made of an iron-nickel alloy? The only reasons that I could come up with (they are kind of crazy) is that:

A. The iron-nickel alloy that composes the inner core is heavier than other elements in the mantle and outer core, causing it to sink to the center of earth.

B. Since both iron and nickel and attracted to magnets earth's magnetic field drew the to metals into the inner core mixing them into the alloy.

C. Earth started as a giant asteroid composed of an iron-nickel alloy (which many are), and other materials from space built upon it causing earth to have an iron-nickel core (I told you they were crazy!).

But these explanations don't really make much sense to me.

The first thing you should think about is how the accretionary disk cooled and the cosmochemical constraints this put on Earth (But I am not going into details here). From studying meteorites it is apparent that the oldest meteorites don't show signs of chemical differentiation (e.g. melting, ...) and are thought to represent the solids that formed from the accretionary disk. Because of their characteristic round structures, chondrules, they are called Chondrites. The most chemically primitive Chondrites (e.g. https://en.wikipedia.org/wiki/Allende_meteorite) roughly have the same composition as Earth. This is why it is thought that Earth formed by accretion of these smaller chondritic objects.

There are also other meteorites called "achondrites", meaning "no chondrules". They show signs of chemical differentiation (we can find stony-, stony-iron-, and iron-achondrites). For this chemical differentiation to happen it is necessary to think of the meteorite as having a parent body, on which this differentiation took place. These parent bodies differentiated similar to earth into an iron-nickel core (iron-achondrites), an olivine-rich mantle (stony and stony-irons) and a silicate crust (stony-achondrites). Because differentiation takes time, it is somewhat unlikely that a parent body formed, was destroyed and the iron-core was recycled to nucleate Earth (Earth has roughly the same radiometric age as many meteorites). So your suggestion C would take quite some explaining. Also suggestion B is not temporally possible, because the magnetic field needs a liquid iron core to work and therefore only came into existence after the iron migrated to the core. 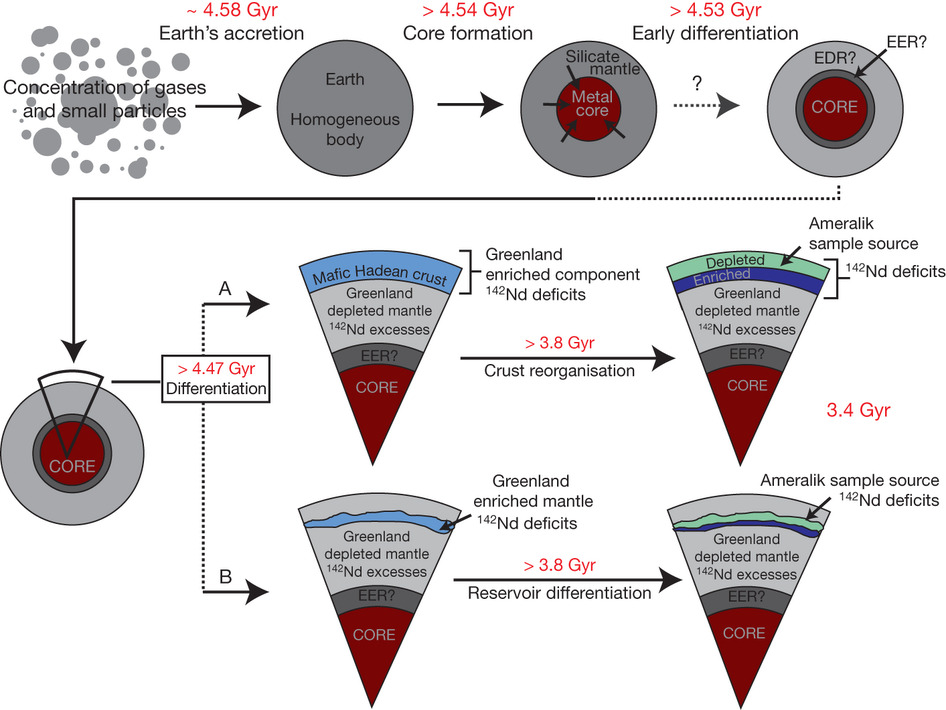 A few words about iron-nickel. This has something to do with the abundance of elements in the accretionary disk (http://upload.wikimedia.org/wikipedia/commons/e/e6/SolarSystemAbundances.png). Iron and Nickel are very common elements. They are also siderophile, which means, that when a chondrite melts, the iron will try to separate from the sulfide- and silicate-melt. Because of the larger density of this melt, it will try to move towards the core of a planet. But it is very likely that other elements form a certain percentage of the core's chemical composition and it can be reckoned that this will be similar to some of the compositions of iron-meteorites.

Your guess A is correct. Iron, nickel, and other heavy metals like gold, are what makes up the core of the earth because they are the heaviest of the metals and so sank toward the center of the earth.

Also, since the earth is believed to have been made out of loose material (asteroids) out in space, it would make sense that it would be made out of much of the same materials as the asteroids themselves. Which, I guess, would make C partially correct also.

B is not correct because, (as pointed out in Spießbürger's answer):

The magnetic field needs a liquid iron core to work and therefore only came into existence after the iron migrated to the core.

From what I found after doing a little research on this question, your answer C is the most accurate explanation.

Not the answer you're looking for? Browse other questions tagged geology geophysics earth-history core or ask your own question.

18
Why are minerals found in “large” quantities and not scattered throughout the earth as individual atoms?