Could the original H. naledi "burial chamber" have originally been at a shallower depth?

Homo naledi was a hominid that has recently made the news, in part because the discovery of a large number of fossils appears to suggest ritual "burials" by a species from 2.5 million years ago, significantly predating those of H. sapiens.

The "burial chamber" was found in a cave system at a depth of approximately 30 meters. Given that there should be zero ambient light at that kind of depth, it seems to me that either H. naledi was very strongly motivated to bury their dead in that particular location (which makes the burials even more amazing), or the chamber has changed it's depth and become significantly deeper than it would likely have been 2.5 million years ago.

Is it likely that a cave chamber can change it's depth significantly over 2.5 million years?

EDIT Added a view of the layout of the burial location cribbed from the New Scientist article... just because it shows how motivated H. naledi must have been to put their dead where they did. 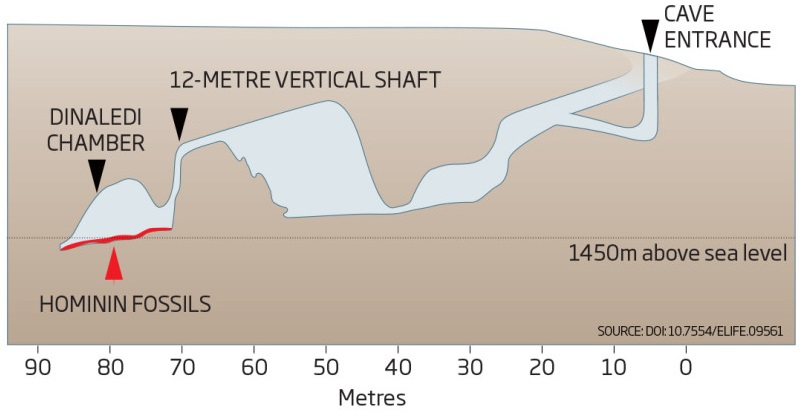 2.5 million years is more than enough time for things to change drastically some places, in New Zealand there are mountains whose sediments were seafloor ooze a million years ago, but Africa is not usually one of them. Africa's geology is normally far too stable to show major changes on that short a timescale. In the normal course of things a given position in a cave system becomes shallower as time goes on due to surface erosion. What I can find on the Monte Christo Formation that holds the Rising Star Cave and the surface survey here suggests that there have been no major deposition events since the caves were formed, this would suggest that in fact the fossils were even deeper under ground when they were deposited.

It is however possible that there was a transient hole in the roof of the cave that has since filled with redeposited minerals and is no longer evident, such are not unheard of in karst terrain and would have supplied light to great depths. The bones may also have originated closer to the cave entrance and been swept deeper into the system by flooding at a later date.

From the Wikipedia article about the cave:

"A portion of the cave, used by the excavation team en route to the Dinaledi Chamber, is called "Superman's Crawl" because most people can fit through only by holding one arm tightly against the body and extending the other above the head, in the manner of Superman in flight.[2][5]

The Superman Crawl opens into the "Dragon's Back Chamber," which includes an approximately 15 m (49 foot) exposed climb up a ridge of a sharp-edged dolomite block that fell from the roof sometime in the distant past. This block is the so-called Dragon's Back, so named because the climbing route appears to progress from the tail to the head along the spiked spine of a mythical beast."

So probably the last two obstacles, the dragon's back crawl and the last steep section, weren't there. Likely they could have just walked across those before the ceiling fell in. And possibly there might have been an easier route into the cave that's now hidden under the rockpile.

This isn't an actual answer, but the quote was too long to fit into a comment.

Not the answer you're looking for? Browse other questions tagged earth-history or ask your own question.

13
Have meteorites been found in the oldest sedimentary rocks?
11
Change in earth mass since the time of the dinosaurs
5
Have the landmasses of North and South America ever been part of the same continent?
7
Have there ever been any islands that disappeared due to rising sea level?
8
For how long has the Earth been habitable for humans?
14
Could the earth be much older than the currently accepted number?
1
What has been the influence of the moon on Earth's temperature?
3
How many days has it been since the Cambrian explosion?
6
Has a scientific consensus been reached concerning the formation of the Grand Canyon?