What are the striations or ridges in the eastern Pacific Ocean?

Messing around on Google Earth recently I noticed a number of striations in the Eastern Pacific. These appear in an East-West orientation and seem to start on the North and South American continental shelves, and extend for roughly half the Pacific Ocean. For example one of these striations start in Santa Rosa Island off California and ends at Hawaii. These striations also appear to be roughly equally spaced at 8 degree intervals. The North and South American striations are angled with respect to each other and seem to converge at roughly Tahiti.

What causes these? I'm a fascinated novice.

Note the regularly spaced East-West parallel striations starting from the Equator and stepping north. In fact the striation on the Equator covers the entire Pacific. 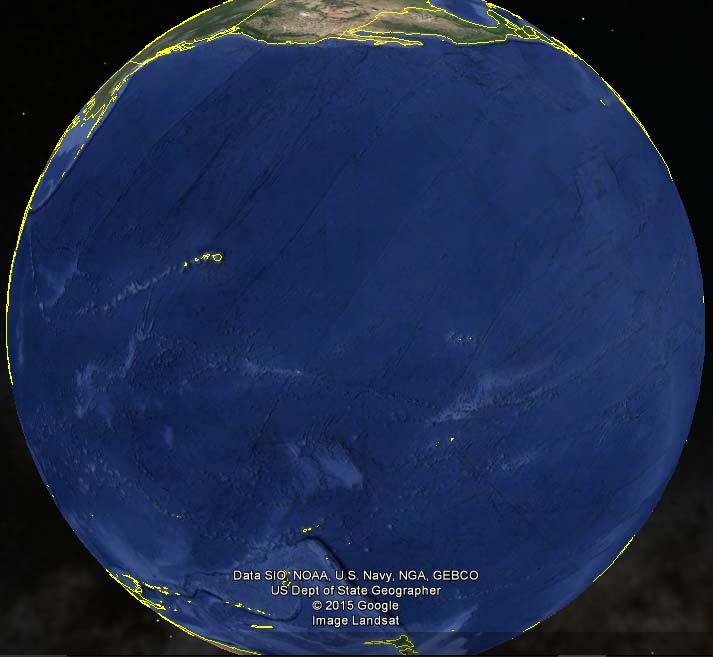 They are fracture zones.

I've annotated your image with the names of these very long, tectonically important features. They even have names, such as the Mendocino Fracture Zone:

I also labelled some survey tracks (rather subtle, very straight, very regular in width), which are data artifacts — these are the things you noticed radiating from the vicinity of Los Angeles.

There are yet other types of linear feature on the sea floor:

Images from Google Maps. Note: I edited this answer substantially after the OP clarified the question... and I learned about the difference between transform faults and fracture zones.

Several data sources with very different resolutions are combined in such maps, for example gravity measurements from satellites and echo sounding (there is also a wikpedia article on that, I can only post 2 links) on board ships.

Not the answer you're looking for? Browse other questions tagged geophysics oceanography topography or ask your own question.

2
What are the parallel horizontal lines on Google's satellite images?
7
Details on Ocean floor

15
Interpretation of a seismogram (three components)
12
What are the non-anthropogenic causes of The Netherlands' low elevation?
5
What is the tectonic explanation for parallel ridges in the Arctic Ocean?
9
What causes the "ripples" that extend east-west along the mid-atlantic ridge?
8
What are these river/canyon-like carvings in the ocean?