Seeking details for the "historical rate" of arable land loss

In doing research on the issue of desertification (aka land degradation) I keep running across the same basic sentence but no source or detail to support or clarify it:

"Arable land loss is estimated to be at 30 to 35 times the historical rate."

Can anyone help me find a source that specifies this "historical rate"? Over what length of time is history being measured? What is the geographic scope of this data?

Failing a specific source for this quote, can anyone provide a reliable source for the data subject the quote refers to (i.e. a long term track record of desertification)?

No context is given, but at face value this is a meaningless quotation. Globally there is a net increase in arable land from close to zero about 8000 years ago, to the current maximum of just over 40% of the gross biological productivity of the planet. 'Arable land loss' can refer to the land lost to urbanization, salinization or desertification. One might also make a distinction about agricultural land lost to hydrologic intervention, as in the decreasing flows of the Amu Darya, and Sur Darya in Central Asia. In addition, over the coming decades we will begin to see agricultural land lost to climate change impacts. No single assessment of the 'historical rate' of arable land loss is meaningful. One has to evaluate the various processes separately, and then aggregate them at regional level.

It's a curious question.

I agree with Gordon Stranger, without context, (and a mention of some link to peer reviewed research, or at least, some kind of measurement), it's pretty meaningless.

I did a a google search and checked links with books.google.com in them to search for a source but everything refers back to UNCCD and UNCCD, as far as I read their reports, never explains or provides a source for that sentence.

List of reports I went through a few - no luck.

I did find this: 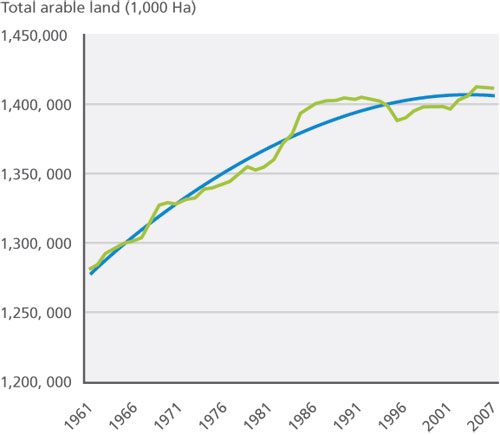 Source: but the problem is, they're using a different criteria than you. Forest can be cleared to create new arable land, so that's why they show an increase when UNCCD shows a decrease. If you combine this chart with deforestation, you might have something a little bit close to what you're looking for.

In the US, (edit) farm land (not necessarily arable land) has decreased but food production has increased due to improved technology, fertilizer and all that good stuff.

Bad farming methods leads to loss of arable land much faster than good methods. Here's a good answer on the dustbowl that you might find interesting and even early societies, thousands of years ago, they lost arable land cause there were processes that happened that they didn't understand, explained more here.

Environmental effects, mostly tend to be cyclical and are probably harder to measure outside of human effects. California might have a big drought one year and have a great growing season the next. The droughts we experience don't make the land permanently not arable, just for 1 growing season. Floods - might have a bigger effect if they wash away good land but they can also have the opposite effect, depositing rich silts adding nutrients to the soil. Over long term, climate change can affect arable land, for example, 13,000 years ago / give or take, the Sahara was a rich forest with huge lakes (We know this by fossils that remain there) and that may be a cycle that comes and goes with every orbital tilt of the Earth. During the last ice age, much land was covered by ice, but lower sea levels left lots of rich valleys that are now covered by water. The story of Noah and Gilgamesh are thought to be based on the flooding of one such fertile valley, caused in part by the end of the ice age and rising water.

So, at least from an environmental perspective, it's a complicated question with lots of moving parts. Hope that helps, though I'm not sure it does. I was curious about what you asked so I looked into it a bit.

The quote you are trying to source was an oft repeated (1999-2002) talking point by Klaus Toepfer (Töpfer), head of UNEP. The oldest instance I can find is in London, 1999.

The rate at which arable land is being lost is increasing and is currently 30-35 times the historical rate. Only about one and a half billion hectares remain out of the original three and a half billion. The loss of potential productivity due to soil erosion world wide is estimated to be equivalent to some 20 million tons of grain per year or 1% of global production.

Other later versions of his quote form a larger paragraph with one or two preceding sentences about soil loss in Africa, so the scope may not in fact be global. He and several others sometimes credit the UNEP Global Environment Outlook 2000 (GEO-2000) report, then link to this overview. I have electronically combed through the above overview and found nothing and I can not find a full report online. There are many alleged links, but they all go to the overview. FOUND IT HERE.

Not the answer you're looking for? Browse other questions tagged soil desert agriculture history or ask your own question.

50
What started the US Dust Bowl of the 1930s, and could it happen again?
11
Did the Neolithic Revolution have an effect on the earth's climate?

13
How does soil redox potential affect the rate of denitrification?
10
How important is Sahara dust for the Amazon?
6
In general, does the presence of vegetation increase/decrease gross water loss (evapotranspiration) compared to barren land (evaporation only)?
3
Evidence for "earthquake storm" at the end of the Bronze Age
4
Where can I find the record for the heaviest single-day rainfall ever recorded on any date at a specific location?