When will glaciation resume? Has global warming delayed return to global cooling?

As far as I understand, we are currently living in the Holocene, an interglacial period of the Quaternary glaciation, i.e. the current ice age that has so far lasted 2.6 million years. The Holocene began about 12,000 years ago. While humans emerged about 200,000 years ago, human civilization is almost entirely coterminous with the Holocene.

(A) Are there any generally accepted estimates for how long the Holocene will last?

(B) Is anthropogenic global warming delaying the return to glaciation?

First, great question, though answers are likely to be non specific and speculative.

As far as I understand, we are currently living in the Holocene, an interglacial period of the Quaternary glaciation, i.e. the current ice age that has so far lasted 2.6 million years. The Holocene began about 12,000 years ago. While humans emerged about 200,000 years ago, human civilization is almost entirely coterminous with the Holocene.

As others have said, defining our current period as the Holocene is iffy. Human influence is pretty huge, and perhaps, even as many as 6,000-7,000 years ago the growth of the agricultural revolution, some farm animal domestication and early, though much smaller, deforestation may have played a role in climate, at least, I remember reading that, though a quick google didn't provide a good source, but I've read that. It's probably not consensus though, just some people's opinion.

(A) Are there any generally accepted estimates for how long the Holocene will last?

So, how long? There's 2 very different answers to this.

First one, if we take out the human effect, or, lets say, in the relatively near future we "fix" our CO2 and other human effects on the planet and return the Earth mostly to how it was. Then the answer is kind of simple, we just Look at past warm periods and make an estimate from those.

Without human activity the Holocene would very likely be just another inter-glacial warm period between ice ages in the continuation of the Quaternary with a similar length of time. See chart: 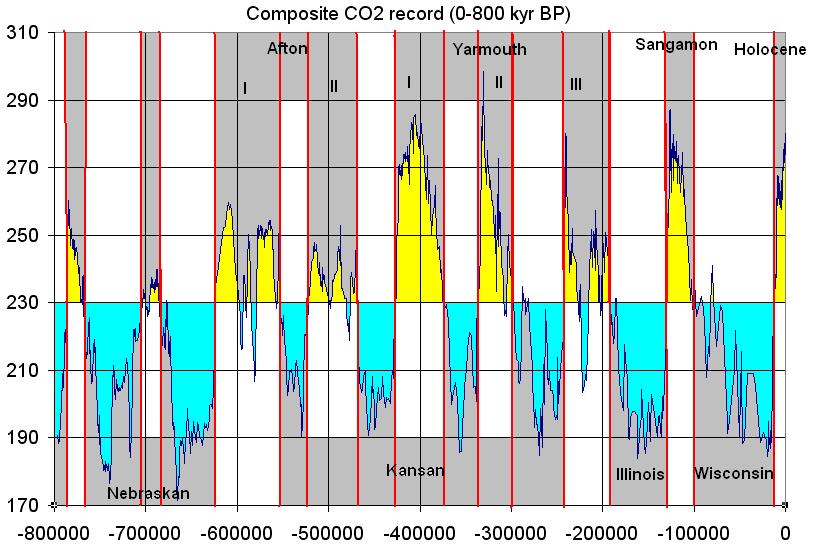 Or, if you want more accuracy, you can look closely at the 3 orbital cycles and calculate based on that - but I'm not going to do that as it would get more complicated. More on that here.

It's also likely that there would be a cooling period within that time-frame. We can see cooling, like the little ice age, without it being an actual ice age.

When will glaciation resume? Has global warming delayed return to global cooling?

(B) Is anthropogenic global warming delaying the return to glaciation?

First, it's worth pointing out that returning to global cooling and a return to glaciation aren't entirely the same thing. If, lets say, we continue our CO2 footprint/production and reach 450 PPM before we cut back enough to level off for a few decades, then, cut back enough to see the oceans gradually take in CO2 and reduce the levels in the air, we could see a gradual global cooling within 100 years or so - maybe, provided the higher ocean temperatures and Albedo drop due to loss of ice cover didn't created a new equilibrium. But in general, the earth can go through cooling periods without glaciation, so those 2 questions are similar but not entirely the same.

But in general, calculating glaciation with the human factor, it's a much harder question, especially since we can't see the future and how high CO2 levels will get.

Modern ice ages are defined as an advancing glaciation across a significant range of the Northern land, which, as pointed out above, coincides well with Milankovich cycles, but to actually have that happen, you need a few things in place. Milankovich cycles don't cause ice ages all by themselves, cause they were there during non ice ages too.

The modern ice age cycle only started about 2.6 million years ago and it is thought to have been brought about by the formation of Isthmus of Panama about 5 million years ago, which separated a current between the Atlantic and Pacific Oceans which helped the arctic ocean cool and freeze over. Shortly after that Isthmus formed, the Earth began to cool. See here (chart from Milankovich link above).

Modern ice ages also coincide with falling CO2 levels, and while the CO2 drop follows the temperature drop, there's a reason for that. Colder oceans hold more CO2, so the Atmospheric CO2 drops when temperature drops. This serves as a feedback loop where cooling leads to more cooling and that's part of why ice ages are as big as they are. Albedo is another feedback loop, so the trigger to get an ice age started is actually pretty small. The Orbital cycles of the Earth are thought to only contribute about 1 degree of cooling in and of themselves and the other 9 or so degrees of global cooling between peak ice age and average Holocene is thought to be caused by these feedback mechanisms, primarily albedo and drops in atmospheric CO2.

So, there's 2 questions to ask as to whether man made global warming will prevent the next ice age and perhaps future ice ages. We know that the Milankovich cycles will continue, but will CO2 be low enough for the cycle to lead to glaciation, and, how fast will CO2 levels drop, so, over the next 10,000 - 30,000 years. Nobody knows the answer to those questions.

Looking at the last 800,000 years or so, based on ice-core samples, warm periods between ice ages you usually have about 260-280 PPM and peak ice age periods, about 180-200 PPM CO2 with the ranges in between, mostly during transitional periods. When these changes occur, most of the CO2 is believed to be absorbed into or released from the oceans, though I see no reason why a smaller portion of the change couldn't be driven by changes in living bio-mass corresponding to the changes in temperature, ocean size and grow-able land area.

Oceans are estimated to store about 50 times the CO2 than the Atmosphere, Source, so assuming that's accurate, Oceans currently store over 110,000 billion tons of CO2 and since the industrial revolution, we've added (ballpark) 1,400 billion tons from burning fossil fuels - about a 1.2 - 1.3% increase to the total CO2 in the Oceans, Air and Land-biosphere. That's the crux of the question, what effect will that have.

Over enough time, like, 10,000-30,000 years when the next ice age might be due, the oceans could absorb most of the atmospheric CO2 and the effects could be fairly small. But as the Earth warms and Oceans warm and warming oceans increases the Atmospheric CO2 cause oceanic absorption drops. With warmer oceans there will be a new equilibrium and with that in mind, it's entirely possible that the new atmospheric CO2 equilibrium, if left to it's own devices, might already be sufficient to prevent ice ages for a long time, perhaps a few hundred thousand years.

Predicting atmospheric CO2 levels 10,000 to 30,000 years from now, for all practical purposes, impossible, and that's what we'd need to know to estimate if we've stopped the next ice age or not. What we have done is increased the amount of CO2 in the biosphere of earth by about 1.2–1.3% and since we continue to burn fossil fuels, we're likely to have created an increase of 2% before alternatives are in place, perhaps a bit more than that.

All of this, however, is probably irrelevant, cause we have some ability to trap CO2. It's not easy, but we can do it and if, as our technology improves and we begin a gradual CO2 trapping program, we could re-start the next ice age in 10,000 years or so, assuming that's what we want to do. Now, I don't mean to make light of the CO2 problem cause we appear to be facing very big and real issues over the next 20-50-100 years and that's much harder to avoid at this point, but over 10,000 years, we could probably fix our CO2 situation and bring the Earth back into the ice age cycle, or, we could use CO2 to avoid future ice ages if that's preferred. Collecting and trapping 1–2 trillion tons of fossil fuel generated CO2 isn't easy and we don't have nearly the technology to do that today, but over 10,000 years I feel pretty confident that we could be able to do it, provided we keep progressing technologically.

A) Some would argue that the Holocene is over, and we are now entering the 'Anthropocene', a new era hugely impacted by human activities. Another view is that the Holocene will be over when the polar (including Greenland) ice reaches a new equilibrium state - which is not in the foreseeable future. Technically there is no way to predict the 'official' end of the Holocene.

B) Major glaciations are somewhat infrequent in the history of planet Earth. There have only been about 7 +/-1 glaciations, depending upon how you define 'major'. The current glaciation is about over, and human induced global warming will see to it that we are not just entering a mere inter-glacial interlude. On top of human induced global warming there is another very long-term global warming caused by the sun's changing radiance. Since the mid pre-Cambrian the sun's composition has changed from less hydrogen to more helium, which has increased the sun's energy output by about 20 to 25%. This change will continue at a slow but accelerating rate, such that the the planet is getting progressively warmer, and we will never again see another major glaciation on planet Earth.

Not the answer you're looking for? Browse other questions tagged climate-change climate glaciology ice-age or ask your own question.

5
Is 2,000 years from now a credible figure for return to glaciation?