What causes these odd-looking currents in the Tasman Sea?

I was looking at the model ocean current maps from earth :: a global map of wind, weather, and ocean conditions for 2015-10-07 00:00 UTC and there are a lot of odd-looking 'whirlpool' areas off the eastern coast of Australia. Anyone know the explanation? Is this a common occurrence? Is it related to the strong El Niño? 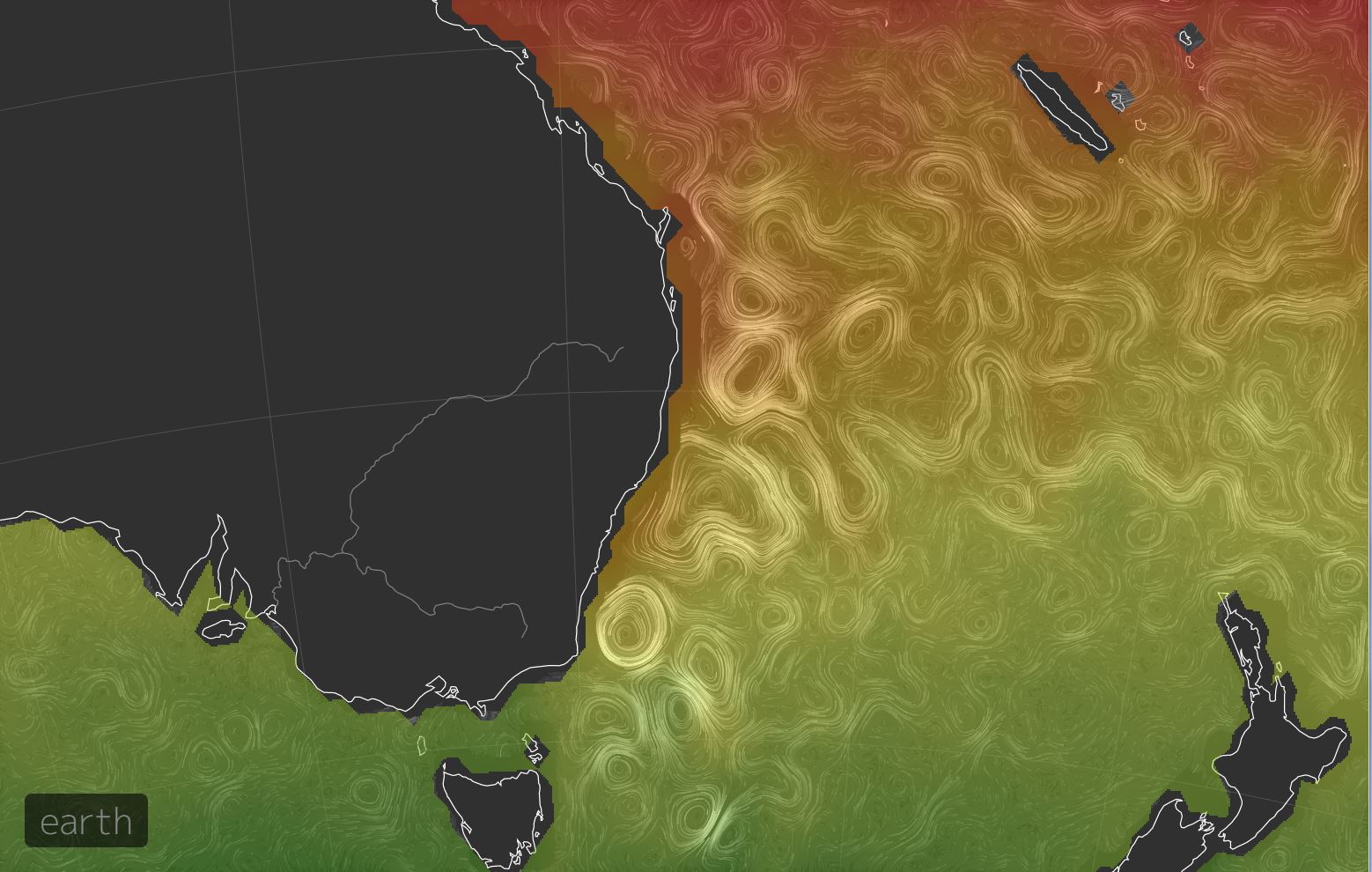 Great question. These features are mesoscale Eddies and they are akin to hurricanes in the atmosphere. They are the ocean’s high or low pressure systems and are the result of instabilities. The cyclonic eddy (counterclockwise direction in the northern hemisphere) is called a cold-core eddy and the anti-cyclonic eddy is called a warm-core eddy.

Unlike destructive hurricanes, ocean eddies are important physical processes for the transport of heat and particulate matter. They stir up the ocean drawing up nutrients from the lower depths and fertilizing waters as they propagate. They are important for the transport of marine organisms in the offshore direction and support phytoplankton and zooplankton production.

In the Tasman sea, this region is known as 'Eddy Avenue' which speaks to their ubiquity and persistence. In Everett (2012) they identified 30 thousand eddies in a period of $15$ years.

“When the current separates from the coast, it gets complicated. It starts to wobble; it meanders. Rather than going in a relatively straight path like the Gulf Stream in the North Atlantic, it walks like a drunk man.” Not only does the EAC wobble, it U-turns. [...] The EAC is a bit anomalous.” About two-thirds of the current retroflects back up into the eastern Pacific, breaking up the EAC further. “It really is a current of eddies.” Such instabilities saturate Eddy Avenue with eddies.

As far as the El-Niño connection, I can only speculate. But generally, El-Niño will give rise to positive SST anomalies. The figure below shows recent positive SST anomalies which are relatively strong near the coast. Because ocean temperatures are higher ocean eddies can increase in size and strength. 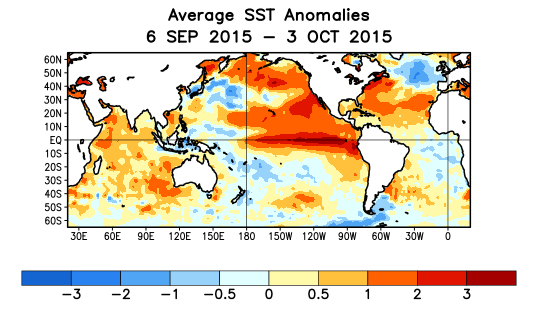 I'm posting this as an answer rather than a comment to expand a bit on the excellent answer from Isopycnal Oscillation and note some minor differences I observed.

I had actually looked for temperature and temperature anomaly differences in the middle of the eddies and didn't see them prior to posting the question so it didn't look like upwelling at first. Here is an image from 2015-10-12 That shows some interesting features.

The areas of positive and negative anomalies actually include several eddies. This is particularly noticeable in the red/yellow areas which seem to be strengthening - there were more groups of blue a few days ago and little yellow. So it appears the vertical motion covers a larger area than individual mesoscale eddies. Is that correct?

The other thing to notice is that the yellow - high positive anomaly is aligned with the high surface current around the eddies, not in the centre. I'm not sure why that is, but seems to indicate that the eddy currents are being driven by the temperature/flow differences between them. 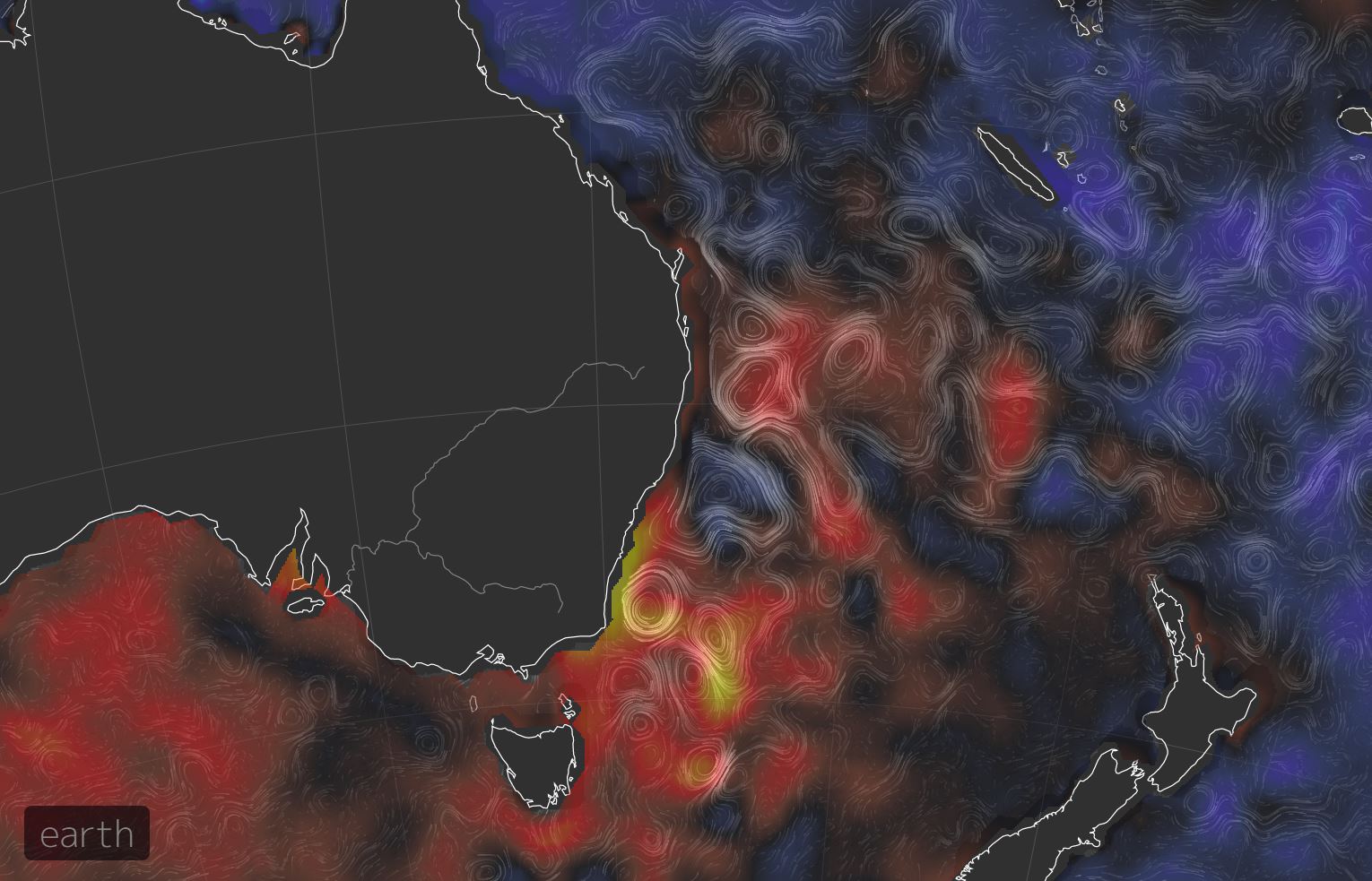 Not the answer you're looking for? Browse other questions tagged ocean oceanography ocean-currents enso pacific or ask your own question.

22
What causes bottom water to rise?
17
What influences tide-height the most? Can I guess the height by looking on a globe?
14
What is the force imposed by underwater currents?
16
Potential explanations of Red Sea crossing
8
What is the relationship between Ekman transport and Ekman pumping?
5
Depth of the wind-induced currents and the shoreline
7
What mechanism is used to measure ocean currents from cables?
12
What is the (average) velocity of ocean currents?