There's a story going around the low-grade news factories that one Dr. David Evans has predicted that the world will start cooling down in 2017. One source reports:

He says fundamental flaws in how future temperatures may rise have been included in the 'standard models' and this has led to inflated mathematical - and therefore temperature - predictions.

Googling finds a number of other sites with the same story. Some identify Dr. Evans as a "former climate modeler for the Australian Greenhouse Office", others as an electrical engineer. None seem to provide any skepticism about Dr. Evans' statements.

I'm sure this is a sham, as otherwise it would be an enormously important story that would be reported everywhere. If so, I'm a little surprised that I found no "boy is this stupid" responses. Perhaps the real climate experts are tired of playing "climate conspiracy Whack-A-Mole".

If a climate change denier were to use this story as proof that anthropogenic global warming is a scam to keep earth scientists employed, what would be the best way to show that he is wrong?

Edit: I just found that Dr. Evans serves on the Board of Advisors of the Committee for a Constructive Tomorrow, an NGO that denies man-made global warming exists.

I gave a longer answer linked to a similar question in the comments above, I'll give a quick one here:

There's a story going around the low-grade news factories that one Dr. David Evans . . .

Everyone knows there's a fair bit of "I know you are but what am I" in the climate change debate (if you can even call it a debate), but whichever side you agree with, David Evans is without question, actively arguing the skeptic side. His position has been consistently in disagreement with man made climate change for nearly a decade, so anything of his you read, keep that in mind.

He's made two climate "denier lists" here and here and he has been called out by skeptical science, here. In another article related to yours, here, it says his work is "undergoing peer review", so for now, his calculations aren't publicly available or verified.

One problem here. We're currently in an El Nino and 2014 was the warmest year on record (38% probability to some, but lets not go there) with 2015 likely to break that record and 2016 - too soon to say but the El Nino is expected to extend into 2016, so 2017 is an ideal year to predict cooling. The global temperature often drops within a year after an El Nino ends, but this is a normal cycle and temporary and it has nothing to do with man made climate change.

What would be the best way to show that he is wrong?

Well, a personal favorite, I'd go with something like:

You could also bring up this list of examples where David Evans has been wrong in the recent past.

But the more scientific answer to your question is that until his research is available and peer reviewed, then there's no way to disprove it, but there's also, no good reason to agree with it. Without peer review and transparency, it's not science. It's just a blog.

Evans has been making predictions of this nature for a while, for example, from 2014:

"It’s already baked in the cake; we can see a few years into the future."

The prediction isn't looking too goo so far 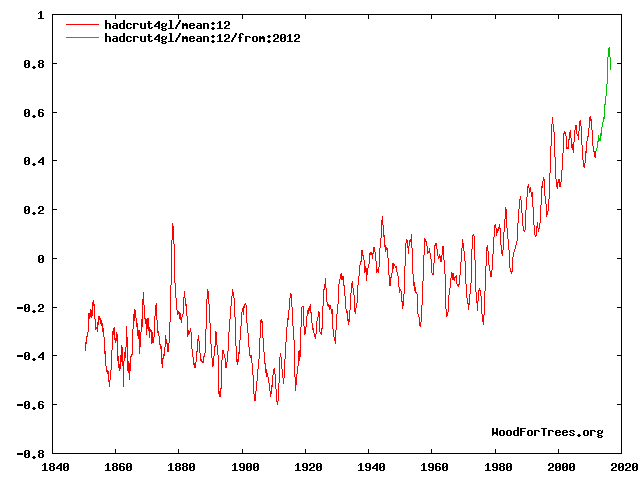 Not the answer you're looking for? Browse other questions tagged climate-change climate-models or ask your own question.

13
When will glaciation resume? Has global warming delayed return to global cooling?
7
How will global warming affect climate systems like the ENSO or the MJO?
5
Would adding sulfur dioxide to the atmosphere have a global cooling effect?
2
Is there evidence to suggest that the release of methane clathrates in permafrost regions will impact climate change?
3
Was there a period of global warming before the start of the last ice age?
17
Why is the energy transition start not reflected in the CO2 concentration graphs?
4
What is the difference between top-down and bottom-up estimates?