How was Nastapoka arc formed?

As wikipedia says, the Nastapoka arc is a geological feature located on the southeastern shore of Hudson Bay, Canada.
(Other description with picture at the Royal Astronomical Society of Canada)

No signatures of an impact event was found. However, 'A hole was drilled on Neilson Island, within the arc, in 1962. The core lacked any evidence of shock metamorphism, but one hole was not regarded as sufficient to settle the question of possible meteoric origin. '

Is that possible that the impact material was buried deep in the past hundreds of thousands of years?

There is other believable mechanism that can form that shape?

A good example of this is the Chicxulub impact. The map of gravity anomalies show the crater quite clearly, even if it is buried under thick layers of sea sediments or surface (Yucatan, MX).

On the other hand, Nastapoka arc is harder to define using similar methods. This recent paper (PDF) (now published here) discusses that it may have more to do with crustal dynamics than an impact. Nevertheless they present an interesting gravity map of the site (See figure), where any links to an impact in this area would not be obvious. 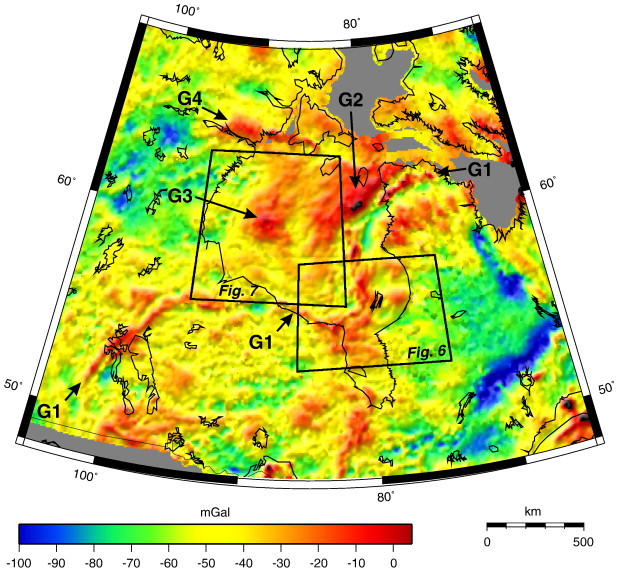 It is true that major glacial activity occurred repeatedly during the Pleistocene east of the Hudson Bay (eg: Laurentidian Ice Sheet sweeping again and again), but yet the Chicxulub impact was subject to many factors of erosion as well since its formation near the K-T boundary.

Still these kind of surveys indicate the nature of the material in the crust - so even if several glaciations impacted the Nastapoka arc area, there would be some kind of patterns still present indicating heavy metals (Chondrite or anything typical of an impact, iron or circular metamorphism).

To conclude, unless other surveys suggests an alternative interpretation path in the future, few evidences strongly support the theory of an ancient impact at Nastapoka.

Perhaps a Comet miles across broke up as it entered the Earth's atmosphere traveling from South to North about 12900 years ago and various large portions would explain all the anomalies including the "new crater" in Greenland, North Carolina Bays and Nebraska impacts and destruction with fire of Megalithic sites in Peru...slamming into the huge Laurentide Ice Sheets absorbed most but not all of the impact from the many large pieces of such a monstrous set of impacts something like that from a shotgun that would have been 100x to 1000x (or more) more powerful than Tunguska or the 1815 Tambora Volcanic event (where there was "no summer") except that the effect lasted 1200-1300 years (10900 BC to 9600 BC). An increase of Platinum 100 fold circa 12890 BP +- 5 years in Greenland Ice Cores hint that such a hypothesis generally known as the Younger Dryas Impact Hypothesis may well have happened but there are many criticisms such as the fact that the amount and volume of fires was not especially high during that 1200-1300 year time period and that the 10890 BC or 12800-12900 BP time period is not agreed upon for some of the phenomena. So it remains a HYPOTHESIS and not enough evidence yet to make it a proper CONJECTURE.

Nastapoca Arc is the result of a multi-pivot oblique delta impact dating back ca. 3.7 Ga. The other other related and simultaneous impacts are these:

We know its impactor.

Not the answer you're looking for? Browse other questions tagged geology meteorite or ask your own question.

12
How deep was the Vredefort Crater when it happened?
10
Which theory is stronger, that iron came from outside or was formed within earth?
8
How are spherulitic structures formed in basalt rock?
7
How is/was continental drift monitored?
11
How could this pyramidal Mountain have been formed?
8
Could diamonds be formed from coal?
4
Is there any new water formed on, or brought to, Earth?
4
How are the Scala dei Turchi staircases formed?
1
How are tall cays formed?