The UAH 6.0 and RSS lower troposphere data sets line up nearly perfectly and both show no significant warming for over 20 years.

What is the leading theory for what's going on? What explains this? 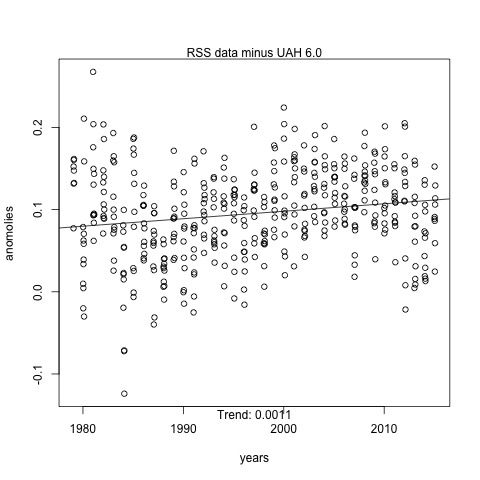 Firstly, the RSS and UAH datasets do not "line up nearly perfectly", the diagram below shows both products over the last 20 years (which appears to be what this question is actually about) here is the url used to generate it. 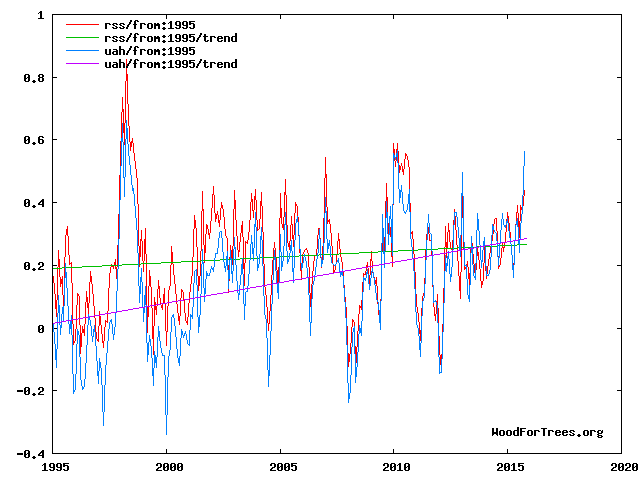 As you can see, they disagree quite considerable on the value of the trend. UAH and RSS are different methods used to infer trophospheric temperatures from them MSU instrument carried aboard various weather satellites. The reason why they differ is because they use different methods to deal with the various drifts and biases involved in the measurements, and the fact that we don't know exactly how this is best performed is what is known as structural uncertainty. Note there are a couple of other similar products, but UAH and RSS are the main ones.

As to "no significant warming for over 20 years", this is the subject of a fair bit of discussion in the journals, but not nearly as much as in the blogsphere, and a lot of it stems from not understanding what the term "statistically significant" means (and more importantly, what it doesn't mean). The key point is that "no significant warming" does not mean "there has been no warming" or that "the rate of warming has slowed". Unfortunately the reasons for this are a little complicated, so I will start with a simple example.

Consider the usual statistical test for the bias of a coin, we start by stating the null and alternative hypotheses:

We then flip the coin $n$ times and count the number of heads, if the p-value is less than some pre-determined value, typically $\alpha = 0.05$, then we say that we can "reject the null hypothesis", implying that the data provides some support for our alternative hypothesis, $H_1$.

However, if we are unable to reject $H_0$, there are at least two reasons for this, it may be that $H_0$ is true, or it may be that $H_0$ is false but we haven't seen enough data yet to be confident of this. For example, if we only toss the coin four times, then even if we get a head every time, we still won't be able to reject the null hypothesis as the p-value cannot be smaller than 0.0625.

So, if you want to claim that it is in some way a surprise that we can't reject the null hypothesis, you need to show that the power of the test is high, and in the case of the trends over the last 20 years, it isn't particularly high, as similar trendless periods ocurr both in the observations and in the model output, as shown by Easterling and Wehner. For example the trend in RSS to 1997 is very similar to the trend from 1995 to the present day, and that is almost as long: 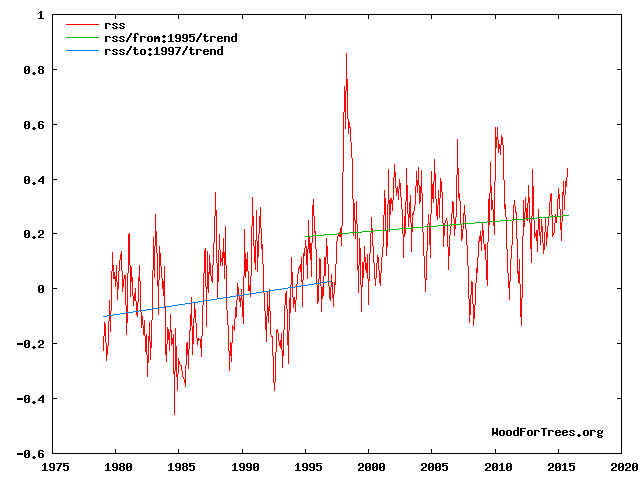 Part of the reason for this is that the RSS and UAH datasets are both very sensitive to ENSO, and the trend over the last 20 years is dominated by the 1998 El-Nino.

So how long do you need to get reasonable statistical power? Well climatologists generally use a period of at least thirty years (IIRC this is a WMO guideline). Santer el al performed a study and found that you would need at least 17 years of data for identifying human impacts on surface temperatures. Note this is a bare minimum, and refers to the detection of a trend in a randomly chosen time period. If you wait until a period of 17 years comes a long before making the argument for a hiatus, the assumptions of that analysis are violated by the fact that multiple hypothesis tests are being implicitly performed, and in practice you would need a much longer period.

Now are scientists ignoring the apparent "hiatus"? No, there have been many studies analysing it, for instance Foster and Rahmstorf show that the apparent hiatus can be reasonably explained by ENSO and volcanic forcing, and so there is no real reason to suppose that there has been a pause in anthropogenic global warming, and the apparent hiatus is probably due to a redistribution of heat between the atmosphere and oceans. There has even been a special issue of Nature Geosciences devoted to this topic.

UPDATE: @user1286792 notes in the comments below: "!UAH, and !RSS show it has been 21.5 years since there has been any tropospheric warming.". This clearly isn't true, at least for UAH. If you plot the trend since 1995, it is essentially the same as the long term trend since the start of the dataset. The fact that the RSS trend for the last 20 years is very different is I suspect the reason skeptic blogs switched from using UAH to RSS, but as always don't believe everything you read on line, and woodfortrees is a great tool for checking things. As I said, UAH and RSS vary considerably over the last 20 years in their trends and the reason for this is structural uncertainty. That doesn't mean that either of them are right or wrong and if your argument is not valid for both, then you probably shouldn't be confident that it is true. Basically the timescale is too short to reliably estimate the trend given the uncertainties in the data, including the structural uncertainties. 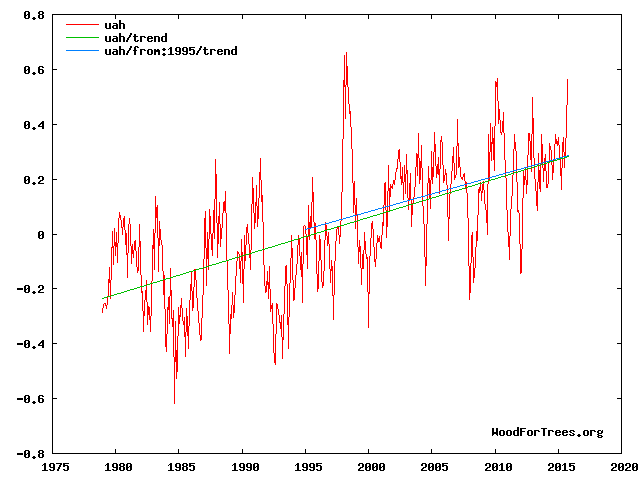 Caveat: I think WFT may be using a previous version of UAH, however this rather illustrates my point about the structural uncertainties, if successive updates to the algorithm make such large differences to the trends, that means the structural uncertainties are very large and we should take that into account when looking at the trends. However, the basic point remains that (i) the trends are too short to expect the warming to be significant (ii) the apparent haitus is adequately explained by ENSO and volcanic forcing (iii) similar periods of little warming are seen in the output of GCMs, and so it is not entirely unexpected.