How long to melt all the polar ice?

The answers to this question say that the sea level will rise 66m if all the polar ice, etc, melts.

How long will this take?

Transporting incredible amounts of heat energy to the poles and injecting it into the ice, a good insulator, so that it melts must be very, very slow. The Netherlands, London, and all the rest will be long gone for other reasons, I imagine, long before it could be completed.

I am looking for an order of magnitude minimum under which it is provably impossible for the ice to all melt any faster. Wild and crazy assumptions are welcome, so long as they err on the side of making the ice melt faster than it would in reality - that way the estimate will always be a minimum.

The question is requesting an answer that has no practical application. So rather than improving on some hypothetical calculation, I will describe the problem and hopefully make the difficulty providing a real answer to a time frame clear.

First: "polar ice" Antarctica is located in a polar position and consists of a multi-km thick ice sheet. The Arctic is covered by sea ice except for smaller glaciers and Greenland, which is not located in a polar position equal to Antarctica. One has to remember that Antarctica is circulation-wise isolated from the rest of the planet by circumpolar circulation, both in th esea and atmosphere, a situation not met in the Arctic. Hence the term polar ice is very fuzzy and should be avoided. It is better to speak about the objects directly.

Second: an ice sheet such as Greenland and Antarctica is not a stagnant sheet of ice, it has its own dynamics and which can change over time depending on forcing and change in forcing.. Greenland is largely land based but with outlet glaciers that terminate in the sea. Although mass loss through these have seen an increase in loss, much of the Greenland mass gain and loss is through surface mass balance (snow accumulation minus ablation, melt). Antarctica is a different beast since East Antarctica is largely land based while West Antarctica is to a large extent sitting on ground below (in places several km) below sea level. Te latter situation is more unstable since the ice could disintegrate by calving (loss through ice berg formation), a process which is potentially much quicker than surface melt (of which there is currently very little in Antarctica). So one part of Antarctica is much more unstable than the other.

Now, several other processes are at play. Ocean currents are sen to produce massive amounts of submarine melt on both Greenland outlet glaciers as well as on the sea-terminating edges of Antarctica. In places, circulation models estimate up to equal loses by calving an submarine melt. This occurs at the same time as there is hardly any surface melt to speak of. So calculating mass loss by surface melt is clearly a lost cause when calving and submarine melt dominate.

Finally, in this still simplified picture, the dynamic response of the ice sheets to changes in forcing is not well understood. This means we do not know how unstable East Antarctica really is. That Antarctica will totally disappear seems very unlikely any time soon and time frames of 10^3-10^4 years is a minimum. Greenland, not being a polar ice sheet is more sensitive in that as it loses mass it is also on average lower in altitude, experiencing more melt. There appears to be a point of no return for Greenland, under which elevation the ice sheet would not be able to recuperate unless the climate cooled significantly. Again the time to melt off the ice is long.

despite the seemingly slow increase in sea level, much infra structure in the coastal environments is threatened by only dm to m changes in ea level so the 66.1 m quoted from IPCC is not something that will happen in a life time but that does not mean the rates are not already problematic.

As a PS, I will add some relevant references once I am back home in case someone misses them at the moment.

We need some numbers. 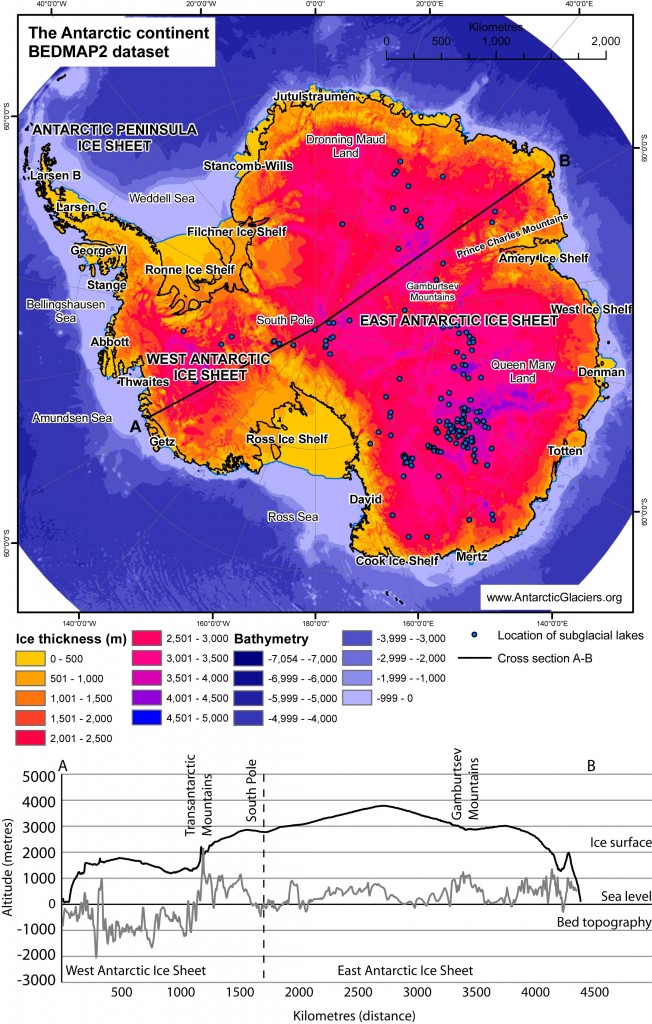 I think we can all relax!

29
How much will sea level rise if all the polar ice melts?
14
Where does the biggest land-based ice cap reside?
5
At what rate are the polar ice caps shrinking?
8
The giant 6,000 km$^2$ iceberg A-68; will ground-truth telemetry supplement satellite tracking data?
5
How would Earth map look like if all ice melts?
4
If all the world's ice were to melt, would this shift the earth's centre of gravity with consequential effects on sea levels?
6
Does snow melt on ice?
10
Does clearing snow contribute to climate change?