Why doesn't the sun reach its highest point overhead at exactly 12:00 noon?

Many sources state that 12:00 noon is the high-point or mid-point of the sun's path across the sky.

Why, at different longitudes, is the high-point of the sun not at 12:00?

It's not a question of latitude but longitude and time zones.

Prior to the advent of railway transportation the time set on clocks varied from towns within close proximity because the clocks were set to noon when the Sun was at its highest in the sky. This was more apparent for towns east and west of each other (ie different longitudes).

Within a band of longitude the time is the same. In the time zones immediately east and west, the time is one hour more (east) and one hour less (west) - ignoring difference due to daily savings.

The reason for time zone being approximately 15 degrees of longitude wide is the rate of spin of the Earth is 15 degrees/hour (360 degrees every 24 hours).

You state that in your town, noon is either 12:30 or 13:30, depending on daylight saving time. The reason for noon occurring at half past the hour is due to the boundaries of the time zone where you live. Where I live, noon is approximately at quarter past the hour.

Maybe a map will help visualise this a bit further: 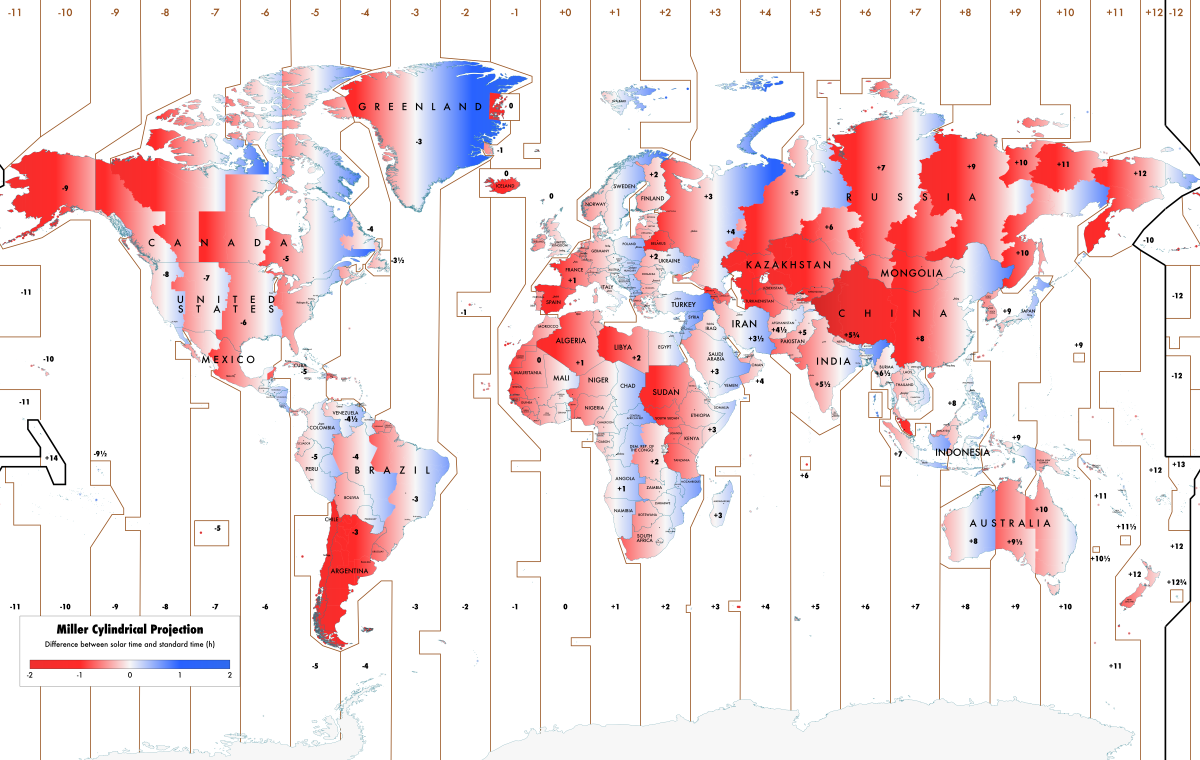 Source: "Solar time vs standard time" by Stefano Maggiolo - How much is time wrong around the world?

As you can see, time zones are according to political boundaries, and this causes an offset from the official time to the solar time.

Time zones explain why you don't observe solar noon at 12:00 exactly, but not why the wall-clock time of solar noon varies with the seasons. In fact, even if you stay in place and don't observe DST, the time in the day where the sun is highest will vary throughout the year.

The Sun moves in the sky more or less together with the fixed stars. It moves slowly among the fixed stars, at a speed of around one degree of arc per day, such that after a year it has traced out an entire great circle on the celestial sphere. This means that the time between two true noons (the times on two consecutive days where the Sun is highest on the sky) is on average about 4 minutes longer than the time between successive culminations of a fixed star.

However, because the Earth's orbit around the Sun is slightly eccentric, the speed of the sun relative to the fixed stars is not constant over the year. It moves quickest in early January and slowest in early July.

Additionally, the Sun doesn't move along the celestial equator -- it follows the ecliptic which is inclined by 23 degrees, so at some times during the year it will "waste" different portions of its daily motion among the fixed stars on north-south movement that doesn't contribute to the four-minute lengthening of the true-noon interval. On the other hand, near the solstices the Sun is nearer to the poles, and it takes less than one degree of east-west motion along the ecliptic to lengthen the day by 1/360 of 24 hours.

The combination of these two effects means that the apparent solar day (the time interval between two true noons) varies during the year between 23 hours 59 minutes 40 seconds and 24 hours 0 minutes 30 seconds. The cumulative effect of this is known as the equation of time, and can be as large as about half an hour -- that is, the time that passes between a true noon in early November and a true noon in early February will be about half an hour more than a multiple of 24 hours.

The zone time we use for ordinary timekeeping is adjusted such that the average difference over the year between true noon in Greenwich and 12:00 UTC is zero [*]. The second, which is the basic scientific unit of time, was originally defined as $\frac1{24\times 60\times 60}$ of the length of a mean solar day, but has since been redefined using atomic clocks. Once every several years a leap second is inserted into UTC to keep 12:00 UTC from drifting away from the averaged true noon time in Greenwich.

Henning Makholm's answer is excellent but omits the elegant definition of the mean Sun, which is what the clock at the Prime Meridian attempts to match:

Consider a first fictitious Sun travelling along the ecliptic with a constant speed and coinciding with the true sun at the perigee and apogee (when the Earth is in perihelion and aphelion, respectively).

This removes the variation due to the orbit's eccentricity. The orbit is symmetric about the line through perihelion and aphelion, so this makes the average offset zero.

This second step removes the variation due to axial tilt; again, the matching-points are chosen for symmetry.

Cannot add to the excellent Time Zone, Daylight Savings, and Equation of Time (Mean Sun) explanations here, but I do want to mention something about the original question by Ian Paschal. It appears to be assumed that the high-point (culmination) and mid-point (transit) are the same, or that the point of highest altitude occurs on the celestial meridian. Though true for the stars, for other celestial bodies these are different. As D.A. Pio puts it in Longitude from Moon Culminations (Royal Astronomical Society, Vol. 59, 1899; p. 513):

Jürgen Giesen gives a mathematical analysis of it here:

The difference is quite small for the sun, up to 18 seconds at mid-latitudes (I believe this is ignored in celestial navigation), but it can be more than 6 minutes in the case of the moon.

Also related (tangentially) to Paschal's question, back before time zones and widely-available accurate timepieces, there were specialized sundials called noon-marks whose sole purpose was to indicate the Local Apparent Noon (LAN).

Well, Sun was there before people and any concept of time. When people emerged, they naturally considered night as period when there is no Sun and Day where there was Sun on the sky.

When time was invented for the first time (ancient civilisations), most likely 12 was the time when the Sun was the highest on the sky. Then people became smarter and introduced different timezones in order to standardise the concept of time and this caused some deviations.

Then people thought they will be more productive (making more money) if there introduce the concept of Winter and Summer time what introduced further time deviations.

Therefore you do not see it anymore point 12.

Not the answer you're looking for? Browse other questions tagged meteorology seasons or ask your own question.

4
What time and date is the sun directly overhead a given place on Earth?
1
Why isn't the sun due south at noon?

16
Why do clouds sometimes form a ring around the Sun?
4
What time and date is the sun directly overhead a given place on Earth?
2
How can I learn to make mesoscale/synoptic analyses of major weather events?
19
Why doesn't the 71% water of the earth dry or evaporate?
2
Why the Indian Monsoon doesn't start in the north?
4
Why isn't the side of the earth facing the sun completely illuminated by sunlight from the north to the south pole every day of the year?
3
Why exactly did the use of Greek letters as names for Hurricanes happen the first place, despite the fairly obvious and predictable impracticalities?