Have there ever been simultaneous cyclones in the same ocean but different hemispheres?

However, it occurred to me that at some point in history, there could well have been two storms occurring in the same ocean but in different hemispheres. Has this ever occurred? This would most likely have to be in the Pacific or Indian Oceans (probably the Pacific, since from what I've gathered the Northern Indian Ocean is less active than most other cyclone basins.) Ideally, a photo/video of this event would exist that I could show my students.

It does occasionally happen. Not often, because to kick-start a hurricane there has to be some rotation to start with, from the Coriolis effect, together with a sea surface temperature of >27 °C (+ some other requirements such as lack of horizontal shear). This combination is best met during summer when one or other hemisphere is tilted towards the sun, so the hurricane seasons in both hemispheres tend to be 6 months out of synchronization. But there are occasional overlaps, as in this vector composite, found at http://www.wunderground.com/blog/JeffMasters/archive.html?year=2015&month=06&MR=1 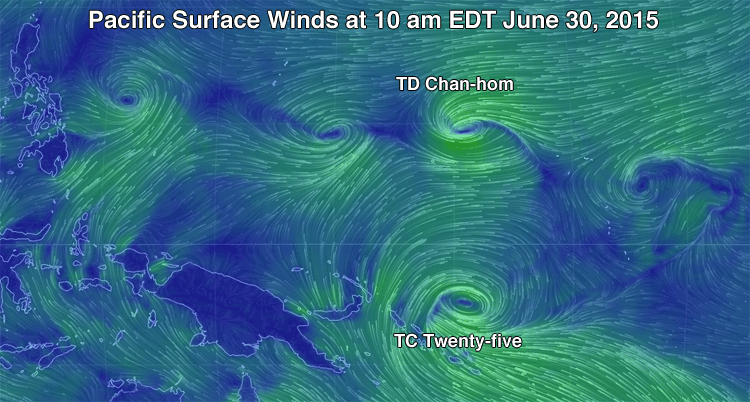 The formation of twin cyclones does occur in both the Indian Ocean as well as the Western Pacific with the Indian Ocean twins being weaker . Schubert et al Symmetric Twin Tropical Cyclones report that the October through May is the period of formation of twin tropical cyclones with December through February being the maximum frequency. The original definition of twin tropical cyclones was provided by Keen in 1982 Cross Equatorial Pairs in the Southern Oscillation. Apart from high SSTs you also need conditions of intense low level vorticity. The convection associated with the eastward propagating Madden Julien Oscillation(MJO) contains cyclonic Rossby gyres that favour tropical cyclogenesis.

A further strict definition for twins include

A more recent reference Schreck et al. A case study of an outbreak of twin tropical cyclones have performed studies that conclude that a broad and long lasting envelope of warm water, low surface pressure and easterly shear are other conditions that are required for formation of twin cyclones. Students can watch the video in this URL Cyclone Pam and Bavi and see the twin cyclone activity

To add to Gordon's answer, Cyclone Twenty-five was also called Cyclone Raquel and it was an "off-season" cyclone, as the following reported in the news. It was the first cyclone recorded in the region during July.

The synoptic weather map the region on that day was

Today (February 22nd 2019) There are cyclones/typhoons/hurricanes in both the North and South Pacific - Wutip east of Philippines, Oma East of Australia. They are not twin cyclones as defined above, having formed at different times, and being well over 22 degrees of latitude apart. Never seen an asymmetrical pair like this before, maybe a function of increasing sea surface temperatures due to global warming. Link to satellite pictures and text below:

14
Have there been any attempts to measure profiles through deep convective systems using dropsondes?
9
Are there any quantities defined analogically to the virtual temperature, but for other gases?
16
Is the poleward migration of the maximum intensity of cyclones a result of tropical expansion or are there some other contributing factors?
10
Why are there different vertical gradients of temperature in different layers of the atmosphere?
10
Have two hurricanes ever merged? And what was the result?
4
Are hurricanes/cyclones/typhoons in the Pacific Ocean usually larger than in Atlantic Ocean?