How much of Earth's forested land is currently protected from logging/deforestation?

Deforestation is an ongoing global problem. From this National Geographic webpage:

The quickest solution to deforestation would be to simply stop cutting down trees. [However], financial realities make this unlikely to occur. ... A more workable solution is to carefully manage forest resources by eliminating clear-cutting to make sure that forest environments remain intact. ... The number of new tree plantations is growing each year, but their total still equals a tiny fraction of the Earth’s forested land.

How much forested land is currently protected from logging/deforestation? How much is currently at risk? How do tree plantations compare in overall size? I'm hoping someone could answer these questions in terms of the main countries involved.

Here is what I have found thus far:

Forests cover 31 percent of the world's land surface, just over 4 billion hectares. This is down from the pre-industrial area of 5.9 billion hectares. ... According to data from the U.N. Food and Agriculture Organization [below], deforestation was at its highest rate in the 1990s, when each year the world lost on average 16 million hectares of forest—roughly the size of the state of Michigan. At the same time, forest area expanded in some places, either through planting or natural processes, bringing the global net loss of forest to 8.3 million hectares per year. In the first decade of this century, the rate of deforestation was slightly lower, but still, a disturbingly high 13 million hectares were destroyed annually. As forest expansion remained stable, the global net forest loss between 2000 and 2010 was 5.2 million hectares per year. 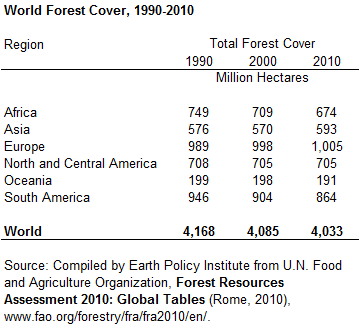 South America and Africa are clearly the biggest area of concerns due to illegal logging and corrupt governance. Should we expect the rates of deforestation in those continents to continue "as-is"? Or is there some percentage of forested areas that can be expected to last (e.g. perhaps some countries are less corrupt)? Furthermore, if the size of forested land on N. America, Asia, and Europe remains constant or grows, how much of that is due to tree plantations?

Browse other questions tagged climate-change forest deforestation or ask your own question.

58
How many trees would I have to plant to solve Global Warming?
3
Is it possible that a reduction in vegetation is a cause of global warming?
3
What rate of deforestation would be needed until we run out of oxygen?
7
How much could Earth's temperature increase by the time we run out of oil reserves?
7
How much heat was released from the 2019-2020 Australian bush fires?
1
How much of the Earth's surface was covered with water during the Mesozoic?
5
How much would weather data from ocean-going vessels improve climate research?
3
How much does earth's core temperature affect earth's global surface temperature