Does this optical phenomenon have a name?

Last summer, I snuck out with a row boat around 4am. Eventually with the sun risen but still quite low in the horizon, I was rowing in the middle of the absolutely still lake when I witnessed an optical phenomenon unlike anything that I've ever seen before: I found myself enclosed in a triangle in which, the sun was in one corner, and in the other corners, the surface of the lake had turned rainbow-colored.

As a photographer I technically understand what happens there, i.e. even though it looked clear to the eye, there obviously must've been some nocturnal mist left on the water surface to act as a medium, and, had there been more moisture particles higher up in the air, I should've seen an entire rainbow connecting these two reflections. But due to the conditions, apparently all I saw was the ends of the rainbow, on their own.

I tried to search for instances or info on this, but found none. Does this specific phenomenon have a name? Under what conditions might one expect to possibly witness this phenomenon?

Here's a quick illustration of the setting, as perceived subjectively. I made a quick simulation of the sun in that time and location using Stellarium , and the sun was about 11Â° above the horizon (actual bald horizon, not including trees, hills etc.) 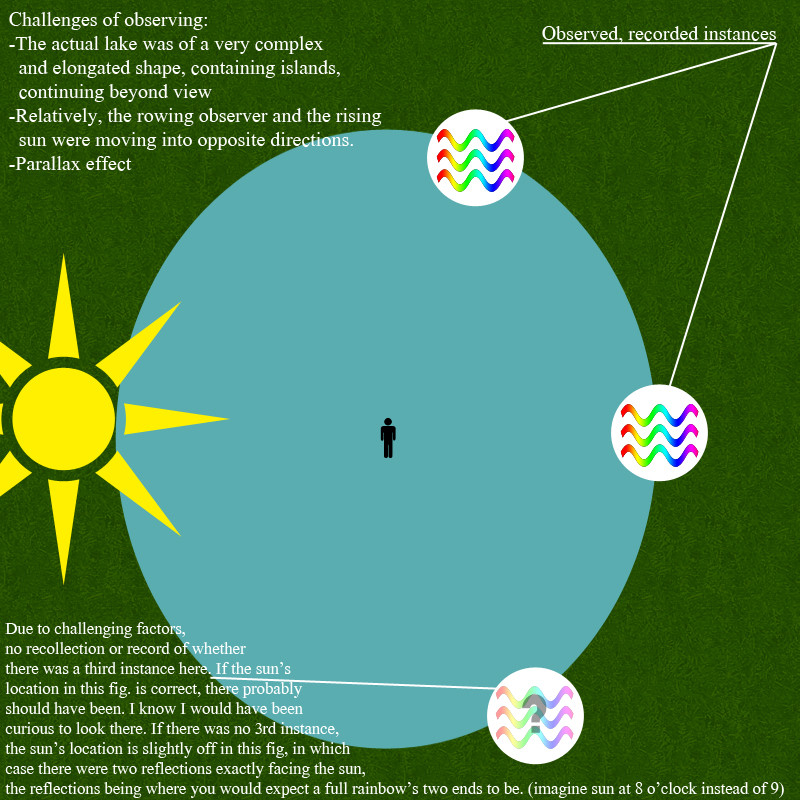 It appears from your picture that there is some mist above the lake surface. The phenomenon will be due to the same mechanism that causes conventional rainbows. The angles between the sun, the mist/cloud, and the observer will be identical but you will only see this with the sun low in the sky since the mist is near the water. That will also make the rainbow appear to be floating on the water surface (great photo, btw). I think the dark background of the trees helps make the colours more intense. The low sun means that the spectrum can be seen on either side and behind the observer. So you are correct that it will form a triangle around you. If I'm visualizing things properly, in your photo the sun would be to your right - on the violet side of the rainbow.

I am not aware of any distinct name for this, possibly because it is not really different from a rainbow from a scientific perspective or because too few scientists are awake at 4 AM.

Not the answer you're looking for? Browse other questions tagged meteorology clouds terminology light or ask your own question.

12
How can you explain this storm phenomenon?
8
What atmospheric phenomenon am I seeing in this photo?
4
Have these optical satellite ground station locations been chosen for clear skies?
6
Is there a name for these "pouring" clouds?
1
Is there a name for this weather phenomenon?
3
Can anyone explain this frost phenomenon?
8
Continuous lightning for over an hour; is this phenomenon common and does it have a name?
2
Atmospheric conditions needed that blocks all bright light during sunsets and allows you to stare directly at the sun
1
What does it mean when polar nights have twilight?