What causes the counter-intuitive presence of CO2 in the atmosphere during spring and summer months?

Recently, I stumbled upon this NASA map of the Earth from the OCO-2, a satellite that measures CO2 density in the atmosphere. http://www.climatecentral.org/news/nasa-tools-co2-19681 Specifically, I'm refering to the tool with the CO2 heat map with the split-screen slider.

As you can see during the spring, there is less CO2 over open ocean and higher CO2 over landmasses. During the summer, (by the naked eye) there seems to be a higher CO2 density across the path the satellite took. I'm curious the reason for the differences we see.

I would expect that during the summer months, when there is a higher density of CO2 , that there would be a lower density of CO2 because of an overall increase in vegetation. During the spring, there would be more CO2 because of a significant decrease in vegetation and increase in energy consumption in the Northern Hemisphere (but not as much as during heavy winter).

Am I making a wrong assumption? What am I missing?

I think this is a distinct question from this one because I'm asking only in the scope of one year or across consecutive seasons.

[The] latitudinal differences in fluctuation are the result of photosynthetic activity by plants. As plants begin to photosynthesize in the spring and summer, they consume CO2 from the atmosphere and eventually use it as a carbon source for growth and reproduction. This causes the decrease in CO2 levels that begins every year in May. Once winter arrives, plants save energy by decreasing photosynthesis. Without photosynthesis, the dominant process is the exhalation of CO2 by the total ecosystem, including bacteria, plants, and animals. Two regions of Earth contain the majority of land plants: Northern Hemisphere continents and the tropics that encompass ... the vast rain forests of the Amazon basin. Near the equator, however, the seasonal variations in temperature are less pronounced. Seasonal swings in CO2 are therefore most pronounced in the Northern Hemisphere, where the seasonal changes in temperature result in very large differences in plant photosynthesis from summer to winter.

My interpretation of the slide-graphic confirms the idea that more CO2 exists earlier in the springtime, especially in the Northern Hemisphere. There are darker reds (~403 ppb) over most of the northern latitudes in March/April 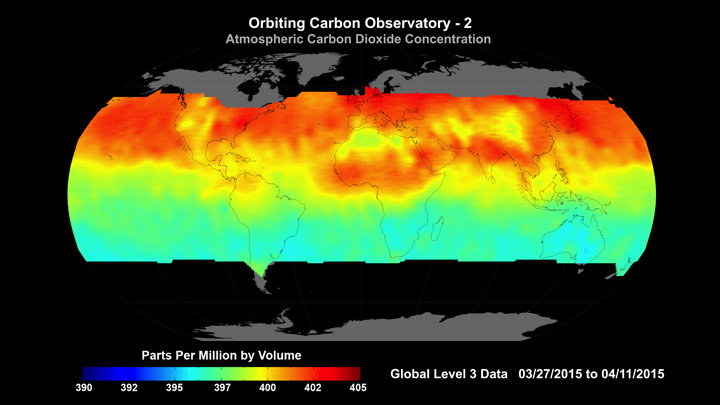 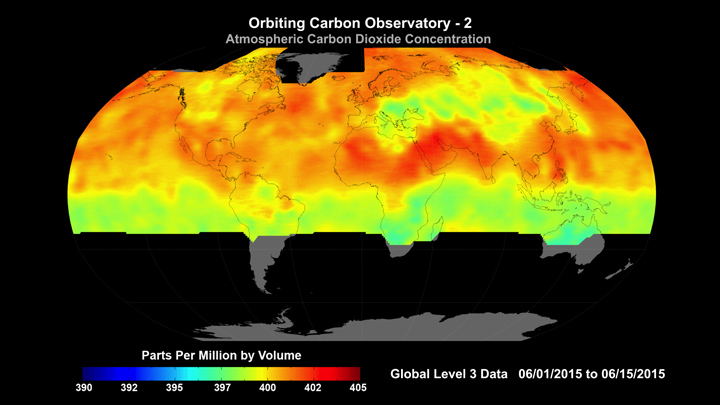 In general, I would caution you in putting too much meaning into graphics that NASA develops such as these. These graphics are made by concatenating a couple weeks of satellite overpass data (generally one to two retrievals per pixel). These are not an "average" like you might think. This is because the swath of the instrument detection is very thin, thus requiring weeks to get "global coverage". Furthermore, the OCO CO2 algorithms are still being refined, and will go through several more revisions before the data is "finalized".

My guess would be that the temperature of seawater has something to do with it. In the wintertime and in the early spring the seawater is colder in the northern hemispere and can absorb more carbon dioxide. In the summertime and fall the water is warmer and will release some CO2. This will explain the seasonal pattern of stations in the northern hemisphere. The further north you come the difference between summer and winter temperature will increase and therefore the amplitude of the seasonal cycles.

Not the answer you're looking for? Browse other questions tagged climate co2 weather-satellites or ask your own question.

24
Why is there a seasonal cycle to the amount of CO2 in the atmosphere?