How to characterize flow of nonreactive tracer in a porous media?

This experiment is conducted by injecting a fluid with nonreactive species of certain concentration inside a column or core composed of sand. The injection of fluid can either be in the form of a pulse or it can be continuous injection. This type of experiment can be useful to characterize the static and dynamic properties of a subsurface and can help us gain a better understanding of the geology and flow dynamics of the fluid.

The constitute equation for a nonreactive tracer test is governed by fluid flow due to advection (viscous flow) and fluid flow due to diffusion. The partial differential equation that governs this process is given as: $$\frac{\partial C}{\partial t} + \nabla.\left(v C - D\nabla{C} \right)=0$$ Where, $C$ is concentration of the tracer in space $(x,y,z)$ and time $t$; $v$ is the velocity of the injected tracer fluid, and $D$ is the dispersion coefficient. 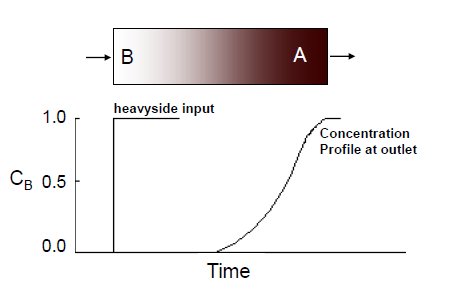 The boundary conditions for this general scenario are given as follow:

Now, there exists an analytical solution for this 1-dimensional example that can give you tracer concentration at any place within the column, say $x$, at any time, say $t$. That is, we can estimate $C(x,t)$ using the following analytical solution: $$\overline C_B=\frac{1}{2}\left[1-{erf}\left(\frac{x-vt}{2\sqrt{Dt}}\right)\right]$$

How to Estimate Dispersion Coefficient

One of the data that we obtain from tracer experiment is the tracer concentration with time at the column output (point A), which is also referred to as effluent concentration. Let's call this data as $C_{measured}$.

Not the answer you're looking for? Browse other questions tagged hydrology fluid-dynamics hydrogeology or ask your own question.

10
How to calculate flow duration curve for a set of 12 year data?
8
Unrealistic solution for advection-diffusion-reaction PDE with heterogeneous porous media
4
comparing use of Laplace equation with diffusion equation to simulate flow of fluid/water through porous media?
4
Coupling recharge with 1D groundwater flow model
3
What forms do groundwater flow equations have when Dupuit supposition is not considered?
1
Hydrology- flow accumulation
1
How are aquifers found and traced?
3
If the top layer of a large river freezes, is the remainder's rate of flow affected?