How do I represent wind direction on a UTM (Universal Transverse Mercator) map projection?

For example, if I draw a wind vector V as seen in the image below, what degrees does it correspond to for the UTM map? 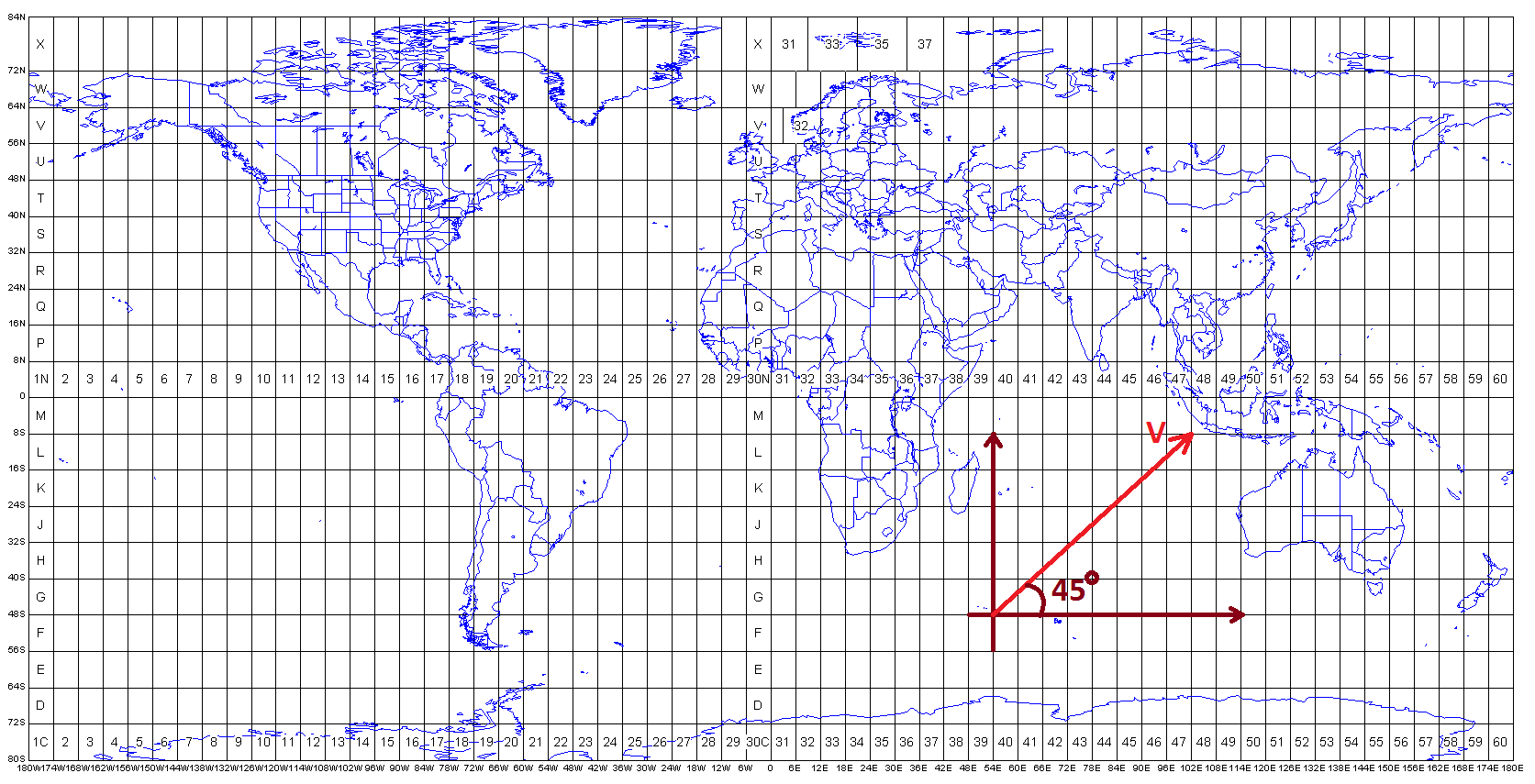 Meteorological winds are referenced from North being 0$^{\circ}$ increasing in a clockwise direction. Additionally, they are named for the direction the wind is coming from. Your vector on the map, which is mathematically 45$^{\circ}$ is meteorologically 225$^{\circ}$ aka a southwesterly wind.

In general if $\alpha$ is the mathematical angle and $\beta$ is the meteorological angle, then the relation between the two conventions is given by $$\alpha = 270^{\circ} - \beta$$ where angles are specified in degrees.

Image from https://www.e-education.psu.edu/meteo300/node/719 from Penn State available under CC-by-nc-sa-3.0

This answer was initially wrong. Thank you to mkennedy for pointing this out. I have now corrected it.

Casey's answer is a good one with respect to interpreting a wind direction in general. However, you specifically asked about doing so on a UTM projected map, which implies that you're aware that in some projections, the direction of North on the page varies from point to point.

This is indeed true for UTM. UTM is a transverse Mercator projection, which means that most lines of longitude follow curved paths on the projected map.

However, UTM is used in narrow zones, as shown in the image in the question. The central meridian of each zone (the line running from north to south in its centre, which has an easting of 500,000m) aligns with a line of longitude, so "up" on the grid corresponds to north. Either side of this the angle of north will diverge, but so long as you are using the correct UTM zone, this divergence should be small (a maximum of about 3 degrees at high latitude at the edge of a zone, less otherwise). Therefore, for many purposes it is still useful to consider a wind direction as an angle on a UTM map.

If greater precision is needed, then some calculation will be necessary - searching for "UTM grid declination" provides a few explanations of how to do this, although I think many are simplified. (I'm not qualified to go into detail on the maths)

Not the answer you're looking for? Browse other questions tagged meteorology measurements wind geography or ask your own question.

21
Significant difference between averaged wind speeds and averaged wind power density, for wind generation modelling?
11
Intuitive explanation of precipitation amount
11
Wind profile below the aerodynamic roughness length
11
Plotting the wind direction in 3D?
8
Why do we say Earth rotates from west to east?
4
Is there a concise industry standard way of displaying wind speed, gust and direction?