If the Oceans Were Deeper

Back home, the average depths of the world's oceans--and the Mediterranean Sea--are as follows:

In this alternate Earth, the average depths are as follows:

How would these changes in depth affect the world's climate and ocean currents?

Might not be the answer you're looking for but the most obvious effect would be a sinking of land and a spreading out of the oceans. Granite, basalt, glaciers and oceans are in a sense, balanced like weights on a scale by their enormous mass and the gravity of Earth. By replacing a mile or so of basalt rock with water at the bottom of the oceans the weight would be unbalanced and the continents would sink, similar to how some land is currently rebounding from the last ice age. The net effect over time would be a few hundred meters of sea level rise if the oceans were to become that much deeper.

But I suspect that's not what you were looking for in your question. You probably wanted to know about weather or oceanic temperature effects. That's a little harder. I can give a sort of answer.

Larger oceans would mean more dissolved atmospheric gas. I had no luck finding good estimates as to how much atmosphere is dissolved in the deep oceans overall, I was able to do a very crude calculation using this website and estimates that there's about 50 times as much CO2 in the Oceans as there is in the atmosphere. Now, my estimate is hugely crude, but there may be an entire Earth's atmosphere, both Oxygen and Nitrogen trapped in the oceans. The deep oceans hold a fair bit of Oxygen and Nitrogen so by making the oceans bigger, the effect might be a thinner atmosphere. 10% thinner? 20%? 5% I couldn't guess the amount, but something somewhere in that range seems probable.

Regarding deep ocean currents, it's difficult (perhaps impossible) to say how currents might change. In general, ocean currents, while not simple, seem to follow fairly simple patterns. My guess is that the amount of depth you've added isn't enough to change that, though if you were to make oceans significantly deeper, you might get a few layers of circulation, not the three, sometimes four layers we currently have. (see pictures). 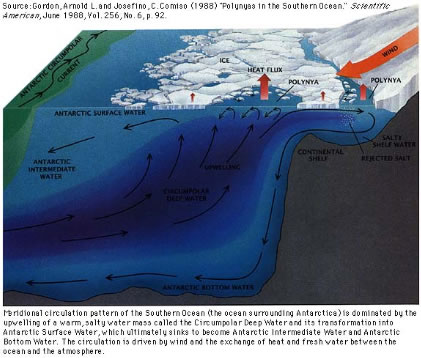 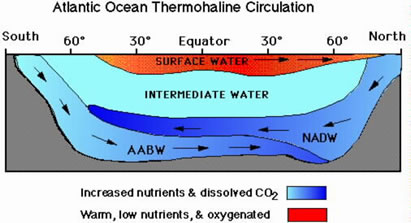 Larger, deeper oceans would also provide a greater heat sink that would take longer to warm up or cool down with the rise and fall of glacial periods. It's possible that there would be no glacial periods with these changes, but predictions get kind of speculative there.

That's all I can think of. I invite corrections and additions.

Not the answer you're looking for? Browse other questions tagged ocean climate oceanography ocean-currents or ask your own question.

4
What is the average cholorphyll concentration for the ocean?
3
How can every ton of CO2 cost 3 square meters of summer sea ice per year - quantitatively?
6
Why are there 5 oceans?
1
How is the total area of the world's oceans 361 million sq km?