What are baroclinic and barotropic waves?

Barotropic flows are those for which the fluid density $\rho$ depends on pressure $p$ only, i.e. $\rho = \rho(p)$. For example, constant density, isothermal, and isentropic flows are barotropic. Baroclinic flows are flows that are not barotropic. In this case the fluid density depends on pressure AND temperature, salinity, constituent concentration. Heavy fluid sitting adjacent to lighter fluid will sink and rise, respectively.

These flows are said to be baroclinic, meaning pressure breaking. 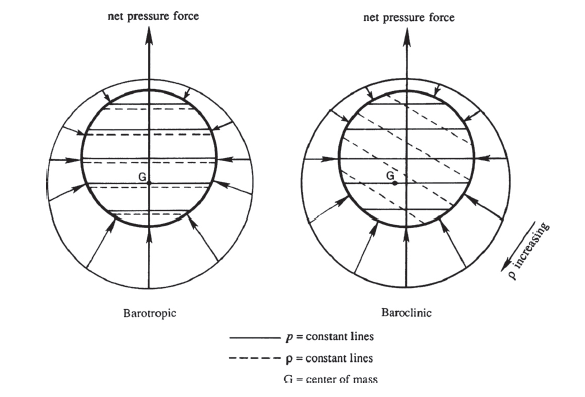 Seen another way, take a look at the vorticity equation with density variation:

In the context of the ocean, water is pretty much incompressible, so density will be virtually constant for a barotropic ocean. Hence there is no stratification for a barotropic ocean, and the only waves the fluid can support are at the interface with the air. On the other hand, if the fluid is baroclinic (density depending on non-constant temperature, and also salinity), then there can be internal gravity waves caused by a change in density in the z-direction.

For the atmosphere, air is relatively compressible. Hence if the atmosphere is barotropic, it means that the only density changes are due to pressure. Hence temperature is horizontally constant and there is no thermal wind shear in the vertical. This is a more reasonable assumption in the tropics than in the midlatitudes.

Not the answer you're looking for? Browse other questions tagged atmosphere ocean oceanography or ask your own question.

7
Are extratropical cyclones the same as baroclinic waves?

15
What is a typical value of the Péclet number for internal waves?
13
Forecasting oceanic rogue waves
12
What is the area with the largest velocity vertical shear in the ocean?
11
Waves on sandy beach separating differently-sized rocks?
6
If the atmosphere is (very nearly) an ideal gas, how can it ever be barotropic?
4
How to strong winds cause baroclinic intensification in the upper ocean?
10
What are Atmospheric Rossby Waves and how do they affect the weather?