Are volcanoes formed from earthquakes?

But what if a great earthquake(8.0 or above) occurs and causes there to be a fault line? If more earthquakes of any magnitude occur in the same area the fault line would get deeper and deeper until the mantle is exposed. Then the pressure in the mantle is released and lava starts flowing out of the fault line. Over years this would form a ridge whether that is underwater or inland.

But are any volcanoes actually formed from earthquakes?

From what you wrote, you are assuming several things:

Both are not exactly accurate.

The mantle of the Earth is mostly solid. It has areas where it's partially molten, and that's where the lava in some volcanic eruptions comes from. But mostly, it's solid. Even if you did get a fault line deep down there, it would not release any lava because it's not there to begin with.

...fault line would get deeper and deeper...

Faults can not go too deep. As you go deeper in the earth, rocks stop being brittle and become ductile. They don't break, the flow. Think of chocolate - if you take out chocolate from the freezer you can shatter it to pieces. If you put it in the sun, it bends instead of breaking. Same thing with rocks.

I know that some earthquakes are caused by volcanoes

The movement of molten rock (magma) underground is the cause of volcanos and earthquakes associated with volcanos. Note that these kinds of earthquakes are usually very weak and their destructive power is very small, at least compared to the actual volcanic eruption.

some earthquakes can trigger volcanic eruptions

Not really - only if it's a big earthquake you had molten rock around. Which brings me to the next point...

Having said that - actually most of the volcanic eruptions on Earth in fault lines where decompression of mantle occurs. These are the mid ocean ridges that look like this: 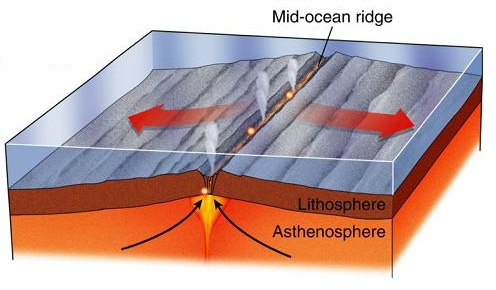 And are located here:

In the case of mid ocean ridges, you basically have mantle rock melting because of decompression, and this is occurring at fault lines with earthquakes. However, the location where all of this is known and it's all pretty expected. It's also in mid ocean ridges (except Iceland) so the danger to us humans is negligible.

Other than those cases, the chances of having a surprise magnitude 8 earthquake with a volcano erupting after it are very low.

Not the answer you're looking for? Browse other questions tagged geology volcanology seismology earthquakes plate-tectonics or ask your own question.

19
How does one measure what causes earthquakes?
15
What does it mean when the depth of earthquakes get near the surface over a period of time?
9
Groundwater unloading and corresponding changes in fault zone stick-slip behavior
9
Why does New Zealand and cold countries have volcanoes?
3
How vertically deep do lava conduits go?
2
What is the lateral ground acceleration, at the fault line, during a strike-slip earthquake?
2
Could Rumblings From Plutons be as Ominous as Rumblings From Volcanoes?
2
Is an Earthquake Large Enough to Cripple the Entire West Coast of North America Possible?