How much of the current global warming is due to human influence?

Approximately what proportion of the global warming seen over the the last century is attributed to anthropogenic sources?

Firstly it is worth demonstrating that 97% of climate scientists agree that climate-warming trends over the past century are very likely due to human activities.

But what percentage of the increase is attributed to humans? Probably almost of all of it.

The scientist Gavin Schmidt from NASA was asked this question on realclimate.org

His response was as follows:

Over the last 40 or so years, natural drivers would have caused cooling, and so the warming there has been (and some) is caused by a combination of human drivers and some degree of internal variability. I would judge the maximum amplitude of the internal variability to be roughly 0.1 deg C over that time period, and so given the warming of ~0.5 deg C, I'd say somewhere between 80 to 120% of the warming. Slightly larger range if you want a large range for the internal stuff. [emphasis added]

The rapid increase in the human-driven component of the forcing are increasingly dwarfing the small, slow natural forcings, rendering them increasingly irrelevant. 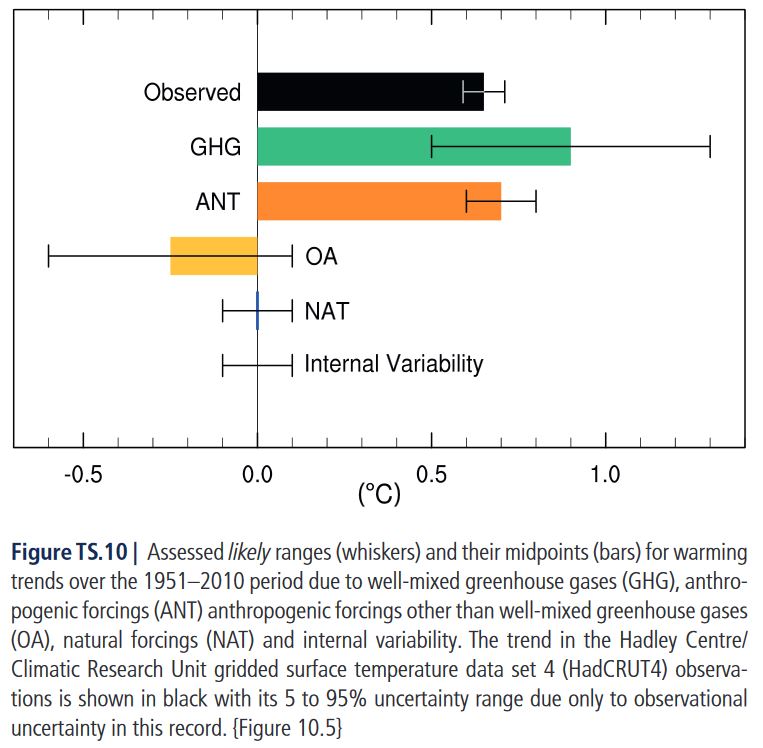 ANT: Sum of GHG and OA

OA: Other anthropogenic forcings on temperature like aerosols and black carbon

Not the answer you're looking for? Browse other questions tagged climate human-influence climate-change global-warming or ask your own question.

6
Is global warming occuring only because of humans?
5
Rate of climate change with and without humans?
-1
Has irreversible global warming already begun?