Ask Question
Asked 4 years ago
Active 4 years ago
Viewed 2k times
7
$\begingroup$
Closed. This question is off-topic. It is not currently accepting answers. 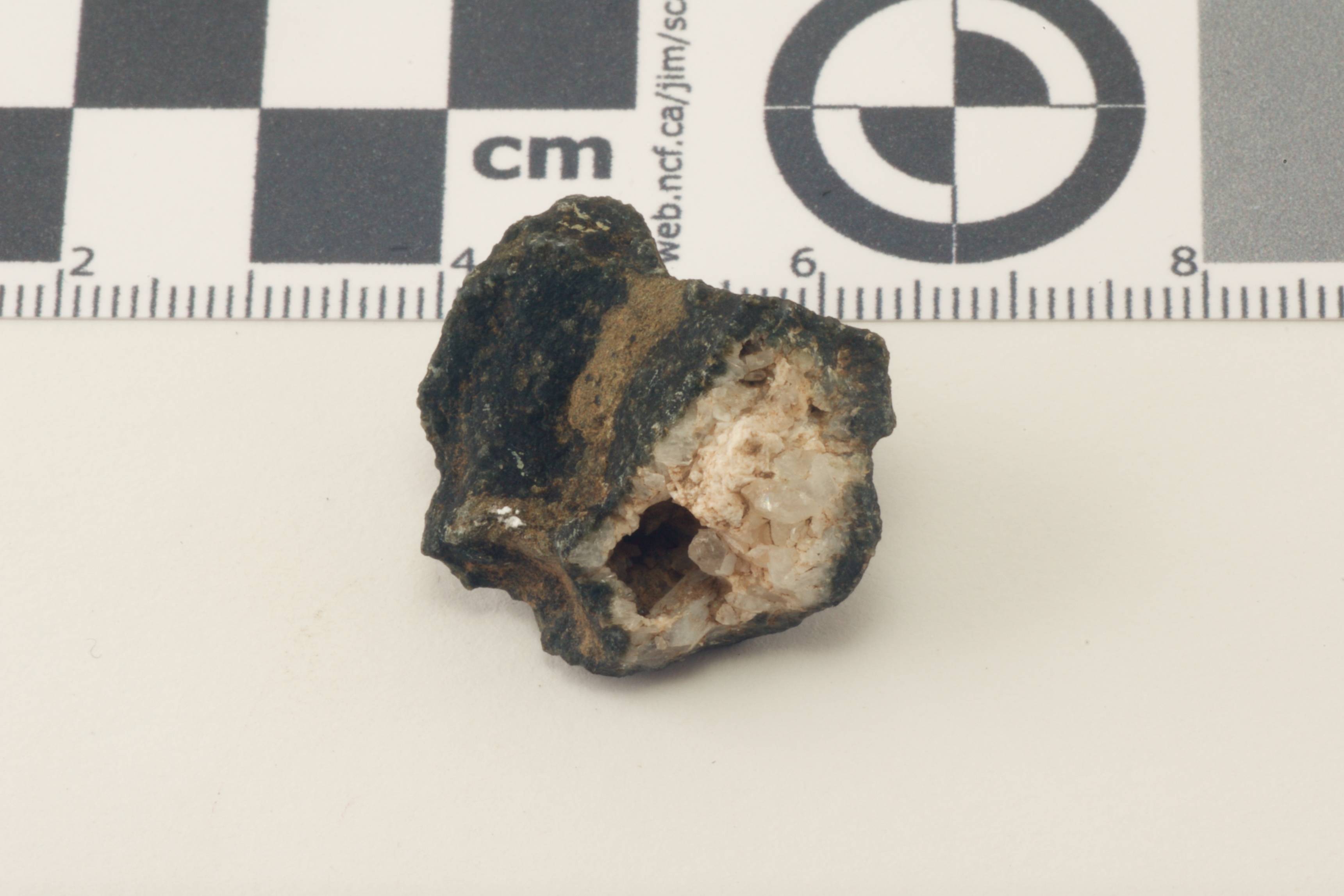 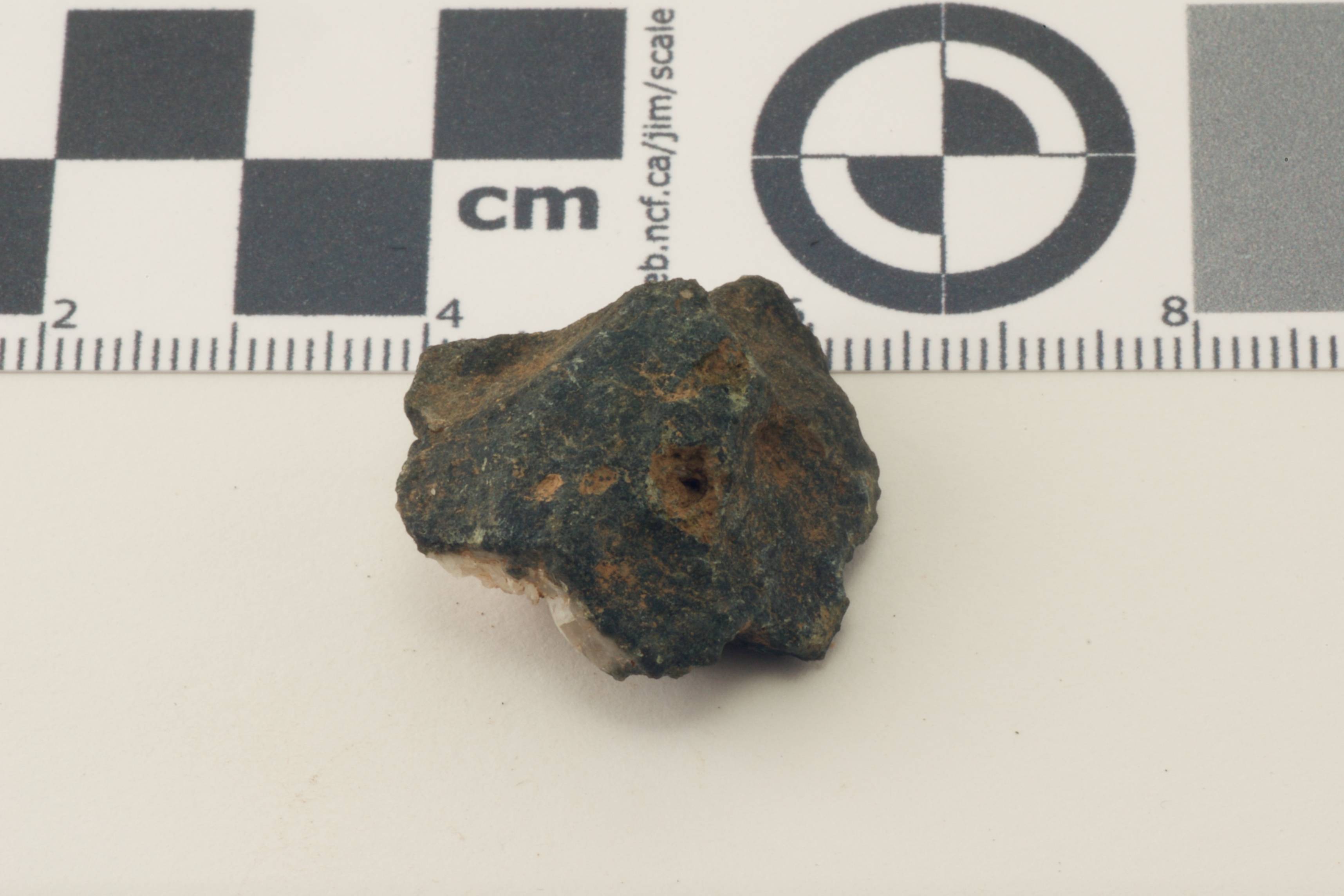 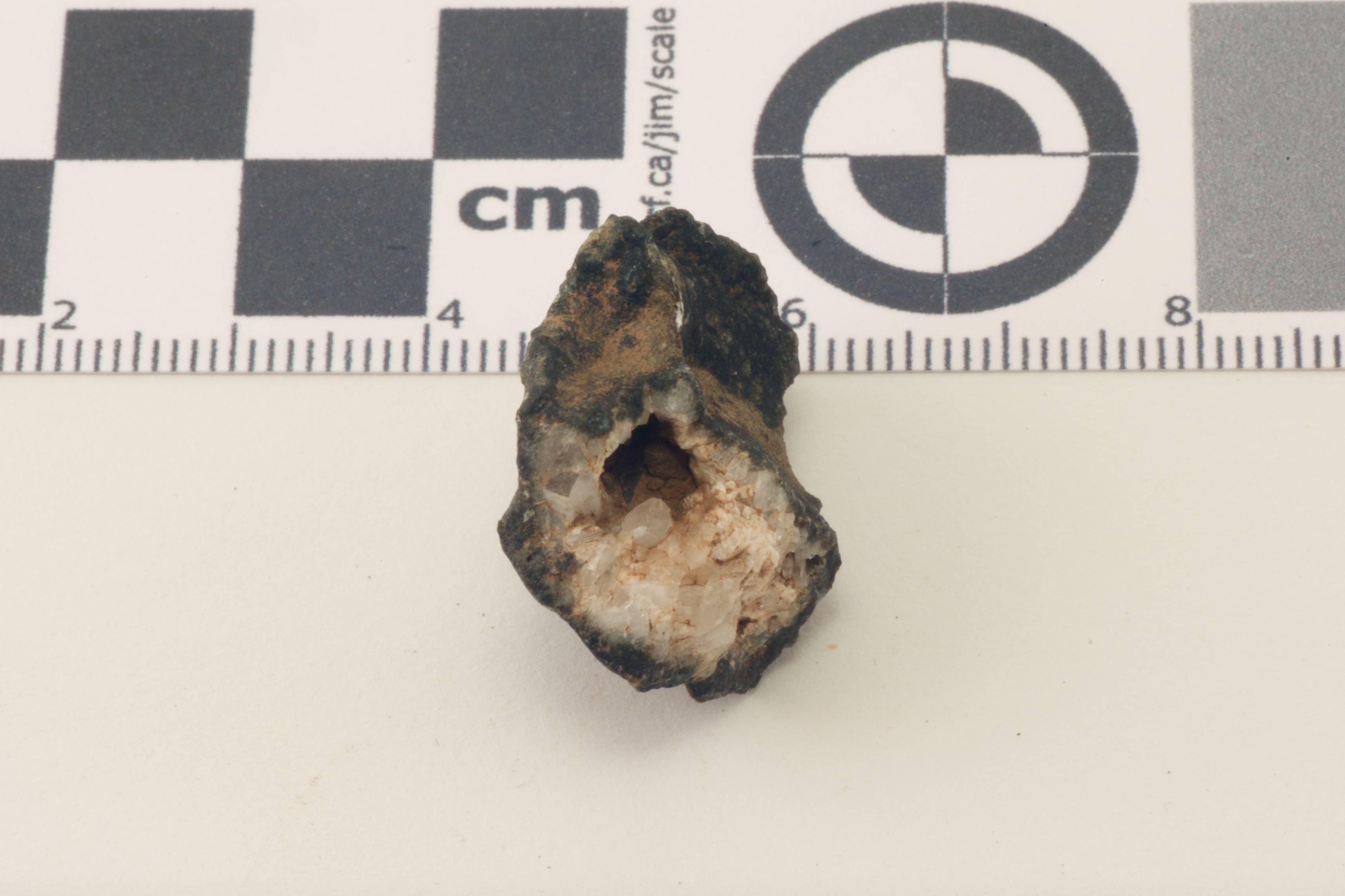 My fiancée found this on a recent trip to Iceland, on Snæfellsnes peninsula - she spotted the sparkle of the crystals among the abundant black, grey, and dark red rocks. There is a roadside vista spot with an informative sign about Axlar-Björn, Iceland's worst serial killer, where we collected a lot of cool rocks. ;)

The exterior is dull and irregular, mostly black or dark grey with a band of lighter brown running down one side. There are cavities on one side which reveal a muddy brown beneath the black shell. There are glints of glassy, reflective specks within the brown spots. The black parts scratch fairly easily; a fingernail with leave a whitish scratch. There's a bright white spot on the lighter brown band (clearly visible in the first photo) which is brighter than the scratches on the black parts. (Some scratches can be seen on the black parts in the second photo.)

The largest cavity have clear crystals as well as some whitish, non-crystal sections. The stone feels a little bit light for its size, the majority is slightly rough to the touch, and with a magnifying glass I can only detect very fine grains on the lighter brown band. It's about 2.5 x 2.5 x 1.5 cm.

Anything we can learn about this rock would be welcome.

Bubble in an ancient lava flow

What you're seeing is a vug in a vesicular basalt.

A vug is simply a term for a mineral-lined cavity. In this case, the host rock is a basalt. You're seeing an ancient lava flow that trapped a bubble of gases escaping from the magma as it cooled. Over time, groundwater infiltrated the bubble. As the basalt was buried, changes in the pressure, temperature, and ion concentrations in the water caused different minerals to precipitate and even change into other minerals.

Given the location (northwest iceland), the minerals are probably zeolites of various sorts. Anywhere else, you'd most likely be looking at quartz, clays, calcite, or amorphous silica filling the cavity.

Northwest Iceland has some of the oldest basalts in Iceland (they're still very young geologically, however). They've been buried and then the material above them has been eroded away, bringing them to the surface. As we'll see shortly, that's a key piece of the picture.

How did the Zeolites form?

Initially a bubble of gases escaping from a lava was trapped as the lava cooled, forming a vesicular basalt. Next, groundwater seeped into the vesicle ("frozen" bubble). Then, the basalt flow was slowly buried by many other basalt flows. Chemical reactions occured as he temperature, pressure, and water chemistry changed due to burial.

Initially, glass and olivine in the basalt near the vesicle would have broken down into smectite clays. Olivine crystalizes at high temperatures as the magma is cooling, and therefore, it's relatively unstable at low-temperature conditions. Glasses form after the lava has erupted and is cooling too rapidly for minerals to form (a glass doesn't have a crystal structure). They're often unstable because there's no regular atomic arrangement. Given time and right conditions, volcanic glasses will turn into minerals (in this specific case, mostly clays).

As the clay-lined vug (a vesicule becomes a vug once minerals begin to fill it) was buried further, the clay minerals began to become unstable due to the changing conditions. When this happens, they transform into other minerals. This is called metamorphism. Zeolite metamorphism is one of the lowest grade (lowest temperature and pressure) types, so the temperatures and pressures involved didn't affect the minerals in the basalt, only the clay minerals in the vug.

Depending on the types of clays and the pressure, temperature and water chemistry conditions, different zeolite minerals formed from the clay minerals that became unstable. In fact, you can actually constrain how deeply buried that particular piece of rock was from the minerals within the vug.

Finally, the rock above was eroded away, and this particular section was brought back to the surface, where you found it.

Geodes begin as bubbles in volcanic rock or as animal burrows, tree roots or mud balls in sedimentary rock. Over time, the outer shell of the spherical shape hardens, and water containing silica precipitation forms on the inner walls of the hollow cavity within the geode. The silica precipitation can contain any variety of dissolved minerals, the most common being quartz, but amethyst and calcite are also found.

Here is something interesting about a Iceland geode collector

Hope these help you

Not the answer you're looking for? Browse other questions tagged geology rocks identification-request or ask your own question.