How high must one be for the curvature of the earth to be visible to the eye?

I would like to ask that at what distance from the Earth's surface the curvature of the Earth is visible. What layer of the atmosphere is this?

I've noticed that at the height of 9-12 Km (the view from from aeroplanes) it is not visible.

Depends on your eye. You can realise the curvature of the Earth by just going to the beach. Last summer I was on a scientific cruise in the Mediterranean. I took two pictures of a distant boat, within an interval of a few seconds: one from the lowest deck of the ship (left image), the other one from our highest observation platform (about 16 m higher; picture on the right): 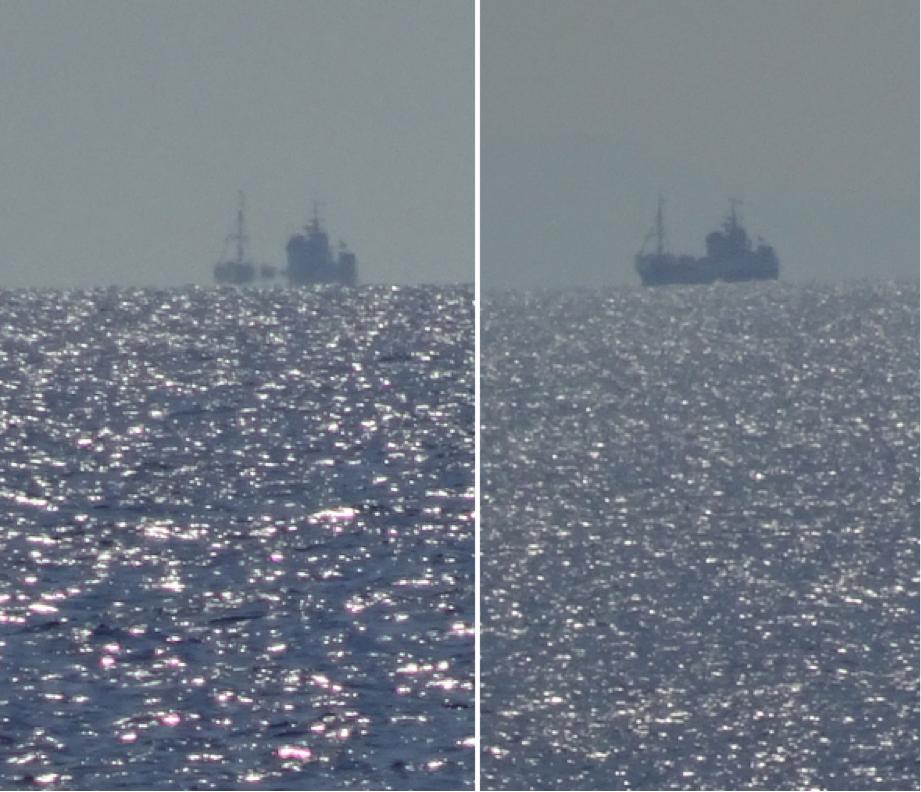 A distant boat seen from 6 m (left) and from 22 m (right) above the sea surface. This boat was about 30 km apart. My pictures, taken with a 30x optical zoom camera.

The part of the boat that is missing in the left image is hidden by the quasi-spherical shape of the Earth. In fact, if you would know the size of the boat and its distance, we could infer the radius of the Earth. But since we already know this, let's do it the other way around and deduce the distance to which we can see the full boat:

The distance $d$ from an observer $O$ at an elevation $h$ to the visible horizon follows the equation (adopting a spherical Earth): 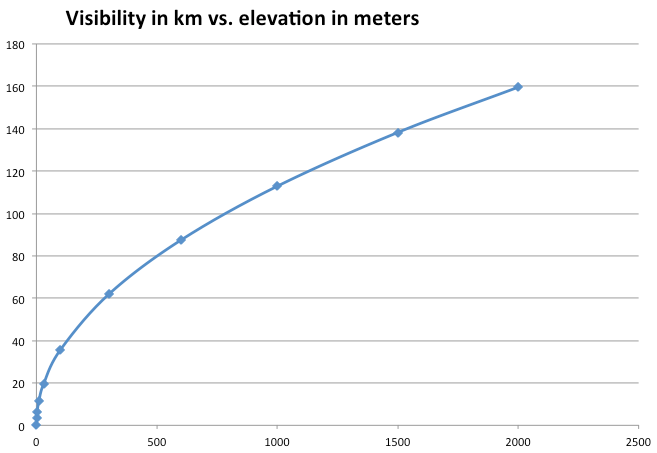 Distance of visibility d (vertical axis, in km), as a function of the elevation h of the observer above the sea level (horizontal axis, in m).

From just 3 m above the surface, you can see the horizon 6.2 km apart. If you are 30 m high, then you can see up to 20 km far away. This is one of the reasons why the ancient cultures, at least since the sixth century BC, knew that the Earth was curved, not flat. They just needed good eyes. You can read first-hand Pliny (1st century) on the unquestionable spherical shape of our planet in his Historia Naturalis. 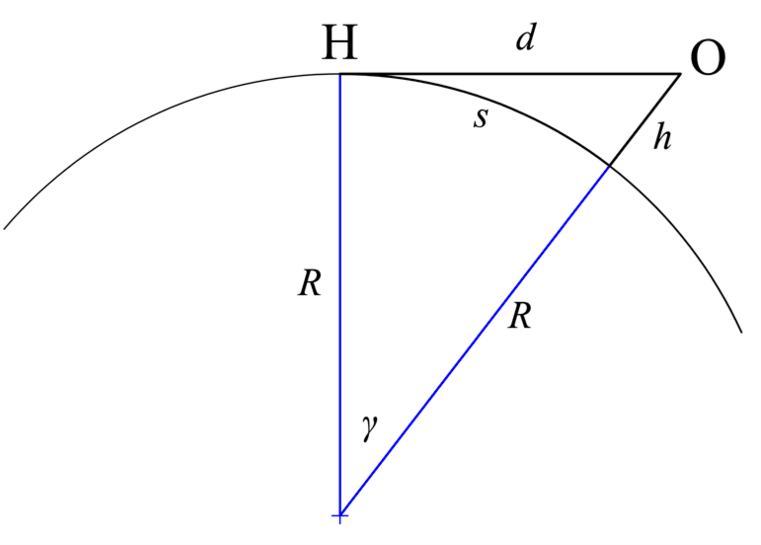 Cartoon defining the variables used above. d is the distance of visibility, h is the elevation of the observer O above the sea level.

But addressing more precisely the question. Realising that the horizon is lower than normal (lower than the perpendicular to gravity) means realising the angle ($gamma$) that the horizon lowers below the flat horizon (angle between $OH$ and the tangent to the circle at O, see cartoon below; this is equivalent to gamma in that cartoon). This angle depends on the altitude $h$ of the observer, following the equation:

where gamma is in degrees, see the cartoon below.

This results in this dependence between gamma (vertical axis) and h (horizontal axis): 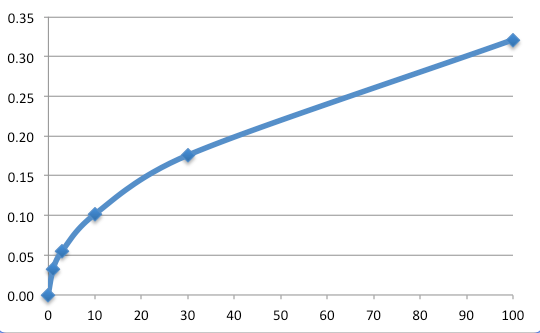 Angle of the horizon below the flat-Earth horizon (gamma, in degrees, on the vertical axis of this plot) as a function of the observer's elevation h above the surface (meters). Note that the apparent angular size of the Sun or the Moon is around 0.5 degrees..

So, at an altitude of only 290 m above the sea level you can already see 60 km far and the horizon will be lower than normal by the same angular size of the sun (half a degree). While normally we are no capable of feeling this small lowering of the horizon, there is a cheap telescopic device called levelmeter that allows you to point in the direction perpendicular to gravity, revealing how lowered is the horizon when you are only a few meters high.

When you are on a plane ca. 10,000 m above the sea level, you see the horizon 3.2 degrees below the astronomical horizon (O-H), this is, around 6 times the angular size of the Sun or the Moon. And you can see (under ideal meteorological conditions) to a distance of 357 km. Felix Baumgartner roughly doubled this number but the pictures circulated in the news were taken with very wide angle, so the ostensible curvature of the Earth they suggest is mostly an artifact of the camera, not what Felix actually saw. 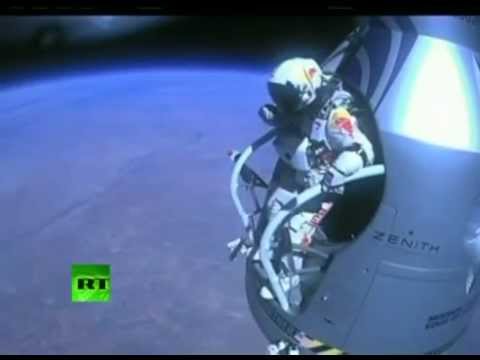 This ostensible curvature of the Earth is mostly an artifact of the camera's wide-angle objective, not what Felix Baumgartner actually saw.

A quick Google turned up a published article answering precisely this question (Lynch, 2008). The abstract states:

Reports and photographs claiming that visual observers can detect the curvature of the Earth from high mountains or high-flying commercial aircraft are investigated. Visual daytime observations show that the minimum altitude at which curvature of the horizon can be detected is at or slightly below 35,000 ft, providing that the field of view is wide (60°) and nearly cloud free. The high-elevation horizon is almost as sharp as the sea-level horizon, but its contrast is less than 10% that of the sea-level horizon. Photographs purporting to show the curvature of the Earth are always suspect because virtually all camera lenses project an image that suffers from barrel distortion. To accurately assess curvature from a photograph, the horizon must be placed precisely in the center of the image, i.e., on the optical axis.

Note that the given minimum of 35,000 feet (10.7 km) is a plausible cruise altitude for a commercial airliner, but you probably shouldn't expect to see the curvature on a typical commercial flight, because:

It's hard to see the curvature of the earth from an altitude of 7 miles or 37,000 ft (typical cruising altitude of a jetliner) but easy to see from 250 miles (typical altitude of the ISS).

Most people don't realize how large the earth is compared to the altitude of a passenger aircraft. It's easy to think we're really high up, but comparatively we're just skimming the surface.

The attached drawing is to scale, but the images of the jetliner and ISS are NOT to scale (much, much larger than their actual sizes).﻿

Further to DrGC's excellent answer, a subjective assessment of visibility of the Earth's curvature can be gleaned from pilot's experioence over many decades. These can be summarized as:

High up on a peak in Hawaii surrounded by nothing but water in every direction, seeing the curvature can be really quite humbling. As far as the boat theory goes, its not something I'd be able to use considering Im aware of the unnerving sizes of deep sea swells and counting rogue waves, naturally between those the boat is at a low point. Having parents that use to go deep sea fishing often, spending over a week out at sea, the swells are...huge.

Is not the amount of curvature available to see reduced by looking at it from a very flat angle - ie multiplied by the sine of that small angle? At 35000 feet the horizon is 229 miles away and 440 miles long, with the maximum field of vision of the human eye of 110 degrees (not attainable in practice) so the curvature depth is 78 miles, but because of the flatness of view, it foreshortens to about 2.4 miles (and much less with a narrower field of view). To resolve 2.4 miles at 229 distance over 440 miles miles is going some, or perhaps about 1 mile or less in practice through a window. Using a telescope does not help as all it does is reduce the angle of the field of view proportionately.

Make your own numbers... I will take one sample with a camera.

Considering the Earth as an spherical body, the distance from you to the horizon depends on Earth Radius and your height by:

So depends on your height:

A gran angular camera have a 24mm focal that can see 84º degrees. So the distance on between the edges on the horizon is:

Once that you have this data, you just need to calculate the arrow of the arc expected:

So, with this data and the initial data of the camera:

So finally... with a perfect visibility condition, a well leveled camera, no fish-eye distortion... On our 4K camera at 10 km height, the Earth curvature it will be 2% -> 36 pixels on 3840 pixels wide.

Human eye can not perceive clearly the Earth Sphericity at a commercial flight altitude. Around 100 km you can take a picture like the one you show on a super gran angular lens.

Not the answer you're looking for? Browse other questions tagged earth-observation horizon or ask your own question.

9
How to measure the cycles of earth moving/rotation?
0
What is the Moon's distance from viewer at horizon?
8
What are we seeing when we see the curvature of Earth?
1
Is there a name for a "moving meridian" corresponding to particular solar time?
7
Can I see curvature of the Earth on a picture
3
Measuring the circumference of the earth - revisited
12
Comparing the Earth with a basketball?