I was reading about the discovery of vast amounts of water locked up in ringwoodite (see here). The authors of the study seem to suggest that previous ideas, involving water deposits being delivered by comets, were brought in to question by the ringwoodite discovery, and that this water was there from the Earth's formation.

Definitely. This was happening throughout most of Earth's history, it's happening now, and it will happen in the future.

Subduction occurring in subduction zones are the main mechanism (only mechanism?) of taking stuff from the surface and pushing it down deep into the mantle. Oceanic crust gets hydrated by reacting with the ocean water. Primary magmatic minerals such as pyroxene and olivine are altered into a variety of hydrous minerals: serpentine, amphibole, epidote, chlorite, talc, etc. Once this hydrated crust gets subducted most of the water is volatilised and gets lost to overlying mantle, and even flux-melting it so you end up having volcanoes. Here's a picture: 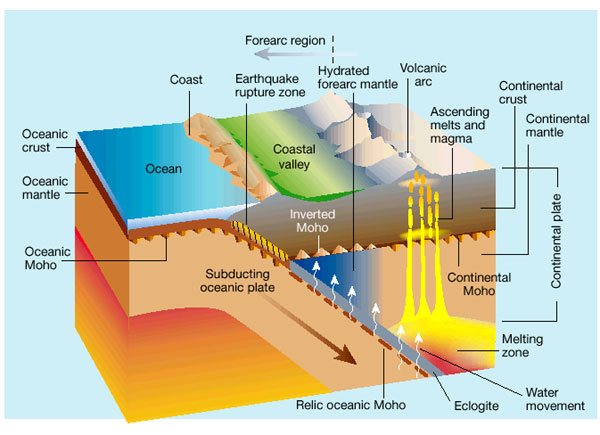 Recent research shows that not all water is lost. Some of it may actually survive the way down deep into the mantle. The identity of the carrier minerals and the exact conditions are still a field of active research and new discoveries are constantly being made. This would most likely form water-rich and water-poor regions in the mantle. The water content of the mantle will thus be quite heterogeneous, which raises the question of how representative was the ringwoodite discovery. After all, it's only one data point.

So to summarise it, yes. Water from the surface can end up in the mantle. This doesn't necessarily mean that this is what is happening, and it may be equally likely that the mantle water is indeed primordial.

Not the answer you're looking for? Browse other questions tagged geochemistry planetary-science water tectonics mantle or ask your own question.

14
Do ringwoodite minerals point to an “ocean's worth” of water, or a true subterranean ocean?
4
What are the implications of the recent discovery that huge oceans exist close to the mantle of the Earth?

13
Phase changes deep in planetary interiors and their implications for surface tectonics
10
Is it known what determines the rate with which plate tectonics occur?
10
Sudden Localized Surface Water Temperature Increase In Eastern Lake Superior, Canada
1
Elemental ratios in rocks and stream water
8
Melting basalt on the lunar surface - what would the resulting material be like?
3
Is there enough water to cover the surface of a topographically normalized earth?
1
Is there a lake whose sole source of water is rain and has a hole at the bottom draining it?
1
Possible and probable source of Curiosity Rover's $\small\sf{CH_4}$ detection on Mars