What is the distribution of global photosynthesis?

Has anyone attempted to classify global photosynthesis? For example, what percentage of it occurs over land? What percentage comes from agriculture?

There will of course be issues with definition and measurement. But any attempts at answers would still be interesting.

You are perhaps looking for primary production.

Cultivated land contributes to about 9% of the net production on land. Read more about that here.

Below is the annual average of the net productivity of vegetation on land and in the ocean during 2002 (from http://science.nasa.gov/earth-science/oceanography/living-ocean/remote-sensing/ ) 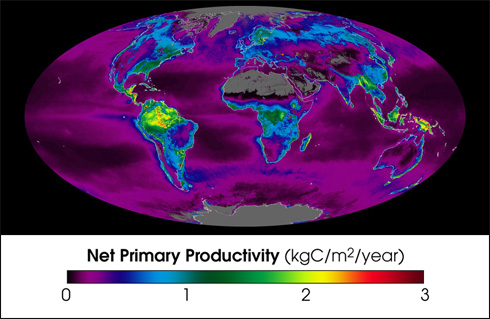 Not the answer you're looking for? Browse other questions tagged measurements carbon-cycle or ask your own question.

30
What is the status of the Raymo & Ruddiman idea that Tibet cooled the Earth?
6
What, if any, scientific value do global soundscapes have?
56
How many trees would I have to plant to solve Global Warming?
21
Is there a database of global rainfall time series?
3
What is the meaning of the units Mg C?
6
Will photosynthesis based carbon sequestration always be more efficient than other chemical means - in terms of rate?
9
How is the distribution of Argo floats managed over the Earth's oceans?
1
Can anyone explain the reason why CO$_2$ increases global temperatures (not the simplistic greenhouse analogy provided for public consumption)?