Why do we say Earth rotates from west to east?

It is said that Earth rotates from west to east. I take this as

Now I can also say that,

So can't I say then Earth rotates from east to west?

P.S: The question was originally asked at https://gis.stackexchange.com/q/178685/66197 The discussion in comments over there might be useful.

Your confusion arise from the definition of East and West hemispheres. That's an arbitrary and confusing definition. Because East and West are relative directions. Meaning they depend on the position were they are specified.

East and West come from the proto-germanic languages, where East means dawn and West means evening. Therefore, East from any given point is roughly the direction at which the sunrise happen. And West is where the sunset happens.

That's why the east/west hemispheres definition is confusing, because if you are in the middle of the pacific, the Western hemisphere is towards the East... confusing.

So let's forget about East/West hemispheres, and consider the East/West cardinal directions. Where East is 90° to the right of North and West 90° to the left of North. These directions keep the original spirit, on which East points roughly to the sunrise, and West to the sunset. Let's also forget about clockwise and counterclockwise, because that depends on where are you looking from. If you are on top of the North pole it will look like Earth is rotating counterclockwise, but from the top of the South pole it will be clockwise.

Now, when we say that Earth rotates to the East, we mean that each point on the surface is moving to the East of that point.

The following figure taken from pulauubinstories.com will help clarifying the point: 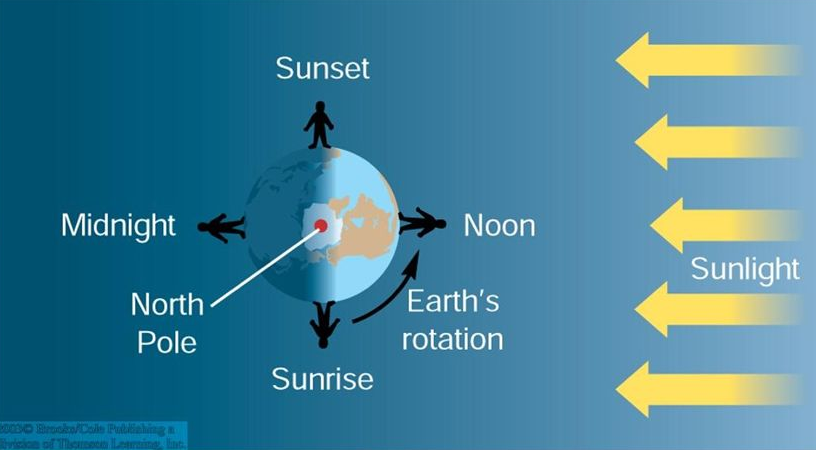 Therefore, as East means "dawn" it follows (basically by definition) that Earth rotates to the East.

Imagine you can fly ignoring wind, gravitation and other forces. You are exactly on the rotation axis looking down the Earth on its North side. You'll see the Earth turning counter-clockwise. But If you look at the same but in South Hemisphere, the Earth is turning clockwise. This is just a convention and it depends on your point of view.

Nevertheless, If we look at the Earth from outside in the way that the North Pole is up and South Pole is down, you are going to see West on your left hand and East on your right hand. Always, does not matter how much you rotate. It does not depend on your point of view.

All this works as long as we set the North Pole up and West is always on its left. It is illustrtated in this gif.

The Earth rotates from west to east or counter-clockwise. You can do simple experiment. put your face towards the polar star and stretch your hands. Your head shows North (towards polar star) and your left hand points towards west, your right hand points towards east and your back head points towards South. The sun rises in the East - from the direction of your right hand and sets in the west - towards your left hand. Assume the sun is fixed in space because with respect to the Earth rotation speed the Sun's rotation is very small. Hence it is the Earth which is rotating and is the reason for sunrise and sunset. If the sun rises in the east and sets in the west, then the Earth should rotate in the opposite direction from west to east (anti-clockwise).

You do realize, that you can only define/name your hemispheres after the directions are defined (and how they are defined) in that reference system?

The Earth from above the Northpole and it's rotation: 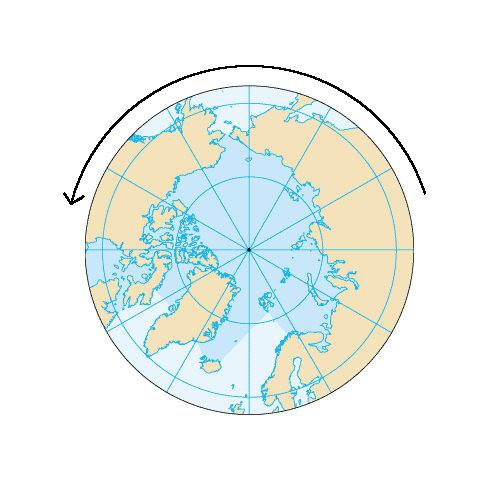 For some reason, we call that "East" and it's opposite direction "West": 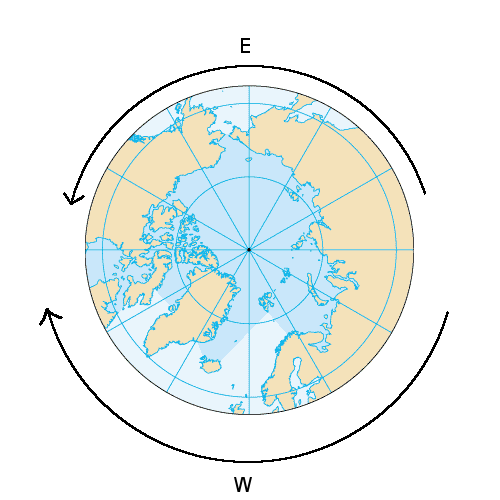 Now we can pick some arbitrary point/line to slice the Earth into 2 hemispheres and name them according to which side of the slice is in which - previously defined - direction.
Just for fun, let's call it our "prime meridian", so everybody is clear what we are taking about.
(In the end .. it's a sphere. It has no that point to cut or that 2 hemispheres.) 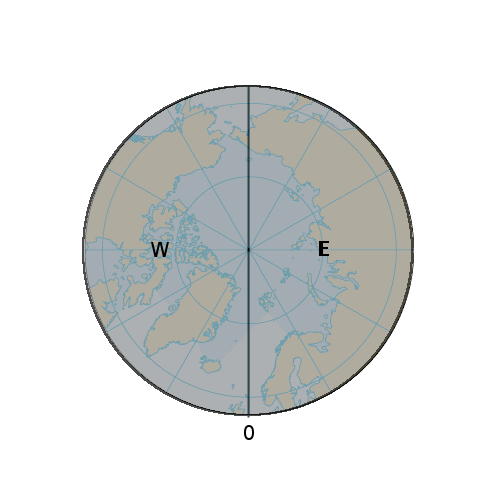 Now put that together in one picture: 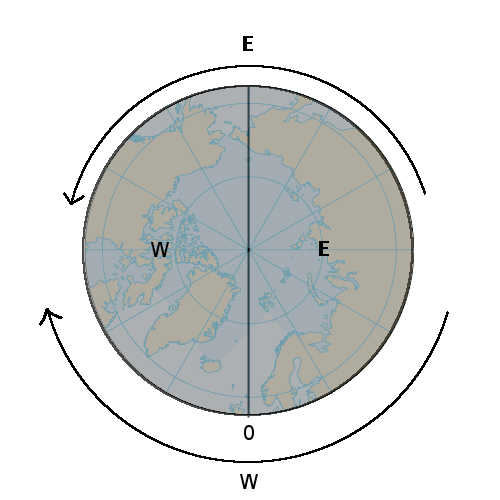 What is the vector named the eastern hemisphere moves?
It is East. Period.

It doesn't matter, that at some point(s) in time the eastern hemisphere takes place, where the western hemisphere was.
You cannot change the naming of the direction without rendering the whole naming convention for your hemispheres (and thus all your assumptions) null and naught.

What you are trying to do is just nonsense.

13
Climate on an Earth without an Axial Tilt
11
Does gravity differ from place to place on Earth
11
Was the filling of the Three Gorges Dam's impact on the Earth's rotation rate detectable?
2
Flight time differences between flying east and flying west
82
What place on Earth is closest to the Sun?