Why are oceans so deep?

Some areas of oceans are about 11 km deep. Is it because continental plates were moving away because of troughs in the middle from where new rock is formed? If so, why did it become deep? If not, what are other reasons?

The deep zones in the ocean are not where new rock is formed. The trenches are the areas where rock is subducted back into the mantle. Here's a picture to visualise it: 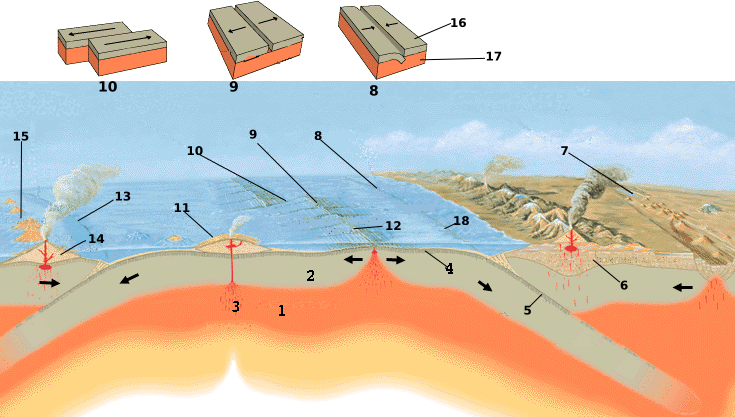 New rock is formed at mid ocean ridges (for example 12 in the image). Those are areas that are less deep than the rest of the ocean. This rocky plate sinks underneath another plate (either continental or oceanic) and by doing so "pulls" that plate down (for example 13 and 18 in the image). This is what causes the extreme depth of those areas.

Not the answer you're looking for? Browse other questions tagged geophysics geology oceanography plate-tectonics subduction or ask your own question.

18
How did Earth's plate tectonics start?
1
Speed of tectonic plate movement
2
How do tightly packed plates move in the theory of plate tectonics?
5
Does subduction of plates make them stretch and form the oceans?
4
Why doesn't subducted earth crust melt?
4
What formations are to be expected to develop between the transform boundaries of oceanic and continental plates?
6
How can linear oceanic ridges (like the East Pacific Rise) be explained by single point mantle plumes?
6
Does subduction of continental crust happen at continental-continental convergent boundaries?
6
Why should there not be water deep (e.g. below 6 kms) in the Earth's crust?