Does gravity differ from place to place on Earth

Does a particular object have the same weight on every part of Earth or does it vary?

There is an entire field of Geophysics called gravimetry dedicated to measuring the magnitude of the gravitational field.

First, we should distinguish between weight (a force) and gravity (an acceleration). Gravity is the acceleration that Earth gives to objects near its surface due to the gravitational force.

Another effect affecting gravity is altitude, as an increase in altitude will result in a change in gravity of about 0.03% per kilometer. The maximum difference in gravity is about 2 Gal (0.02 $m/s^2$) from sea level to the top of Mount Everest.

The gravity field of Earth has been measured recently with a variety of satellites (GRACE, CHAMP, GOCE). The resulting data can be used to generate global geoids such as EGM96 (geoid calculator). Gravitational anomalies can be extracted by calculating differences with respect to the geoid. The range of variations is of order ±300 $mGal$ (±0.003 $m/s^2$). 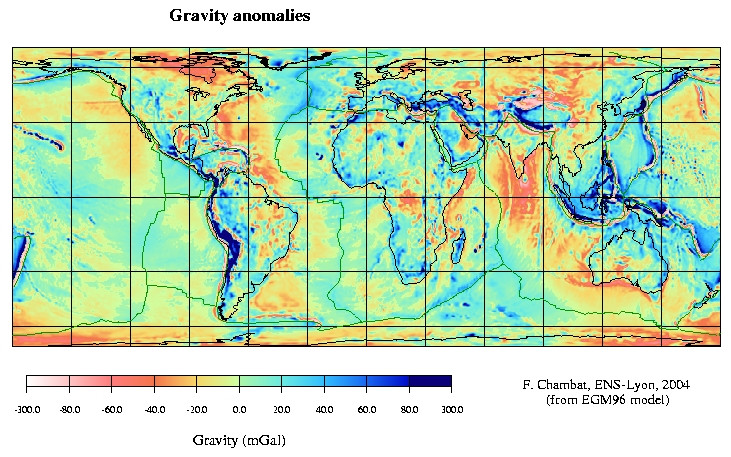 Other factors have a small effect on gravity, such as the gravitational force from the Moon and the Sun that causes the tides. The fluctuations associated with these effects are of order 0.2 $mGal$ (2 $µm/s^2$).

The weight that an object with a constant mass experiences on different parts of the Earth's surface will be slightly different for different locations, largely dependent on the height above sea level and the latitude.

This is due to differencies in the gravitational strength on the Earth's surface at different locations.

the outward centrifugal force produced by Earth's rotation is larger than at polar latitudes. This counteracts the Earth's gravity to a small degree – up to a maximum of 0.3% at the Equator – and reduces the apparent downward acceleration of falling objects.

To add to the previous answer the gravity will vary locally due to the density of the rocks (or other materials) in the area. Gravity meters are used in mineral exploration to find dense rock types associated with certain ore bodies.

Just for completeness changes in the groundwater saturation at a location can have a small effect on the gravity. Filling the pores in unsaturated sediments with water due to increased recharge from precipitation, irrigation, etc. increases the bulk density and thus the gravity.

Not the answer you're looking for? Browse other questions tagged geophysics geography gravity or ask your own question.

8
How do archaeologists address time dilation when analyzing carbon dating results?
11
Change in earth mass since the time of the dinosaurs
9
Terrain correction for gravity data using Nagy, 1973
7
Compute direction of gravity vector
18
Where is the calmest place on Earth?
5
Does the Earth 'Flare' like the Sun does?
5
Plate Tectonics vs Gravity for Creating Highs and Lows
1
Effects of Centrifugal Force on Gravity Vectors?