What causes a rainbow, its colours and its shape?

What is the cause of rainbows? Do they appear due to rainfall or any other natural phenomenon. What makes it form a semi-circle in the atmosphere and its colours?

Short answer: A rainbow is formed when light enters a drop of water or an ice crystal and gets refracted and reflected back into an observer's eye.

Longer Answer: Light travels at different velocities depending on the media involved; it travels slower through water than it does through air, for instance. As light enters a raindrop or ice crystal, it first gets refracted. However, not all the frequencies of light get refracted at the same angle. The colors with the shorter wavelengths (e.g. blue, indigo, and violet) get refracted less than the longer wavelengths (red). This spreads the colors out just like passing through a prism. The light then gets reflected off of the back of the raindrop, gets refracted again as it passes out of the raindrop, and travels to the observer's eye.

The reason it is circular is because the light that got refracted and reflected back to the observer, does so at a specific range of angles, 40 to 42 degrees.

In order to see a rainbow, the sun (or other light source) must be directly behind the observer. A straight line is formed from the light source, the observers eyes, and the center of the rainbow. All rainbows are actually circles. We usually see it as an arc because the earth intercepts the circle. (BTW, because of this, no two people, even standing shoulder to shoulder, can see the same exact rainbow. Each rainbow is being created by different raindrops.) If you're ever in an airplane passing over a cloud with the sun above you (as opposed to near the horizon), you may see a complete rainbow. It's pretty awesome. 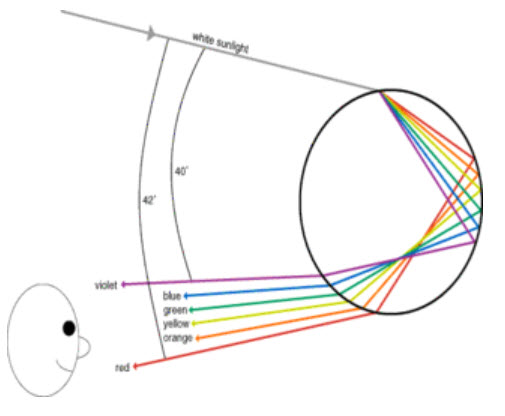 A rainbow requires water droplets to be floating in the air. That’s why we see them right after it rains. The Sun must be behind you and the clouds cleared away from the Sun for the rainbow to appear.

A full rainbow is actually a complete circle, but from the ground we see only part of it. From an airplane, in the right conditions, one can see an entire circular rainbow. Why the colors? Sunlight is made up of many wavelengths—or colors—of light. Some of those wavelengths get bent more than others when the light enters the water droplet. Violet (the shortest wavelength of visible light) bends the most, red (the longest wavelength of visible light) bends the least. So when the light exits the water droplet, it is separated into all its wavelengths. The light reflecting back to you, the observer with the Sunlight coming from behind you, from the water droplets will appear separated into all the colors of the rainbow! Violet will be on the bottom and red on the top.

2
At what point are water droplets too small to make a rainbow?
2
Why are all rainbows are not the same?

10
What are Tetens coefficients?
8
What causes the entrainment of atmospheric gases towards a volcanic ash/tephra plume?
10
Wet and dry seasons - what are they and how do they form?
3
How rare are double rainbows?
8
Effect of urbanization on weather events
5
What causes these periodic high-pressure blobs along the west coast of South America?
2
What causes "Smokey" weather?