Do seismic travel times from one location to another differ based on factors other than distance?

Bit puzzled why it appears that seismic travel times from one location to another appears to just be a function of the distance, and not any other factors. 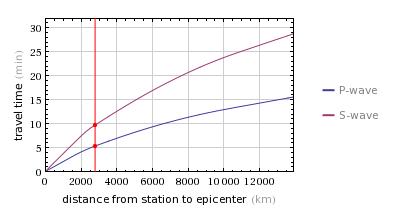 Do seismic travel times from one location to another differ based on factors other than distance?

geophysics earthquakes seismology
Share
Improve this question
edited May 4 '14 at 5:28

The biggest controlling factors are:

I believe you understand the first factor, so I will focus on the other two. The most common GLOBAL velocity model is PREM, which is depicted below(Image Source):

Velocity models basically assume the internal P and S velocity structure of Earth. If the crust is thinner than average in the area where the source is, the arrival times will be faster than if the crust is thicker than average, though depending on the distance this could be negligible. This is because seismic waves travel faster in than they do in the crust, so the least time tends to involve travel through the mantle.

The other controlling factor is composition, or in other words, heterogeneities within the earth. Depending on the composition the wave travels through, arrival times could be slower or faster. For example, imagine an interplate earthquake traveling through a subducting slab and into a seismometer: the arrival times are slower because the wave speed of lithosphere is slower than the wave speed of mantle. In fact, its these deviations from our velocity model predictions that help us find heterogeneity in the earth to begin with! This is essentially how we find our natural resources, though instead of using earthquakes as the source we use man made active seismic waves.

Not the answer you're looking for? Browse other questions tagged geophysics earthquakes seismology or ask your own question.

12
Temporal Resolution of Seismic data
6
Why is it necessary in seismic imaging to calculate an image of reflection coefficients when one of the inputs is the velocity model?
8
Cross-line fold of a towed-streamer survey
12
How to compare earthquake magnitudes
3
How to graph gravity as a function of depth, given radius and density?
3
How do I get the velocity of the P-wave or S-wave without using the travel time graph?
2
Travel Times for Seismic Wave Types - Why reflected t-x plot curves
6
How does multiple layer seismic reflection work? How do we distinguish arrivals from different layers and their velocities?