Is there a formula for heat retained by an atmosphere, based on density and composition?

I'm looking for a formula, either precise or an approximation (it's for a video game so it's ok to have somewhat rough numbers), that determines heat retained from the sun by an atmosphere, based on its density and composition (specifically CO2 composition, but bonus points if it factors other things in too).

Does such a formula exist? Or if not, are there any rule-of-thumb sort of things I could use for estimating "If an atmosphere doubles in density, its heat will rise by X percent" or "If you replace half the CO2 in the atmosphere with O2, your heat will drop by Y percent", etc?

Earth's atmosphere is composed of a number of layers: troposphere, stratosphere, mesosphere, thermosphere and exosphere, ascending in order from the surface.

The temperature profile is complex and is not related to air density (the amber line on the graph) above the tropopause.

There are higher temperatures on the Earth's surface and at the stratopause but low temperatures at the tropopause and mesopause. 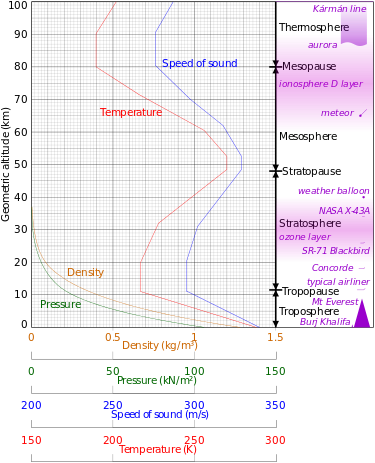 As for carbon dioxide, it is fairly well mixed in the atmosphere, particularly at altitude. Concentrations of carbon dioxide vary laterally near the Earth's surface, with the concentrated regions occurring in areas of major human activity, as can be seen from the NASA produced picture below. 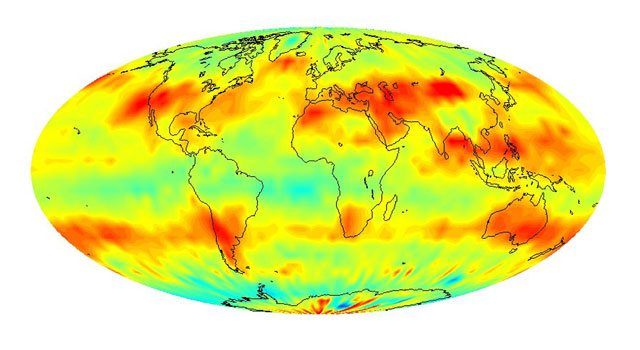 38
What would be the temperature of earth if there was no atmosphere?
22
Significant difference between averaged wind speeds and averaged wind power density, for wind generation modelling?
14
What is the formula used for atmospheric visibility?
4
Can the atmosphere affect the composition of igneous rocks?
4
What was the density and composition of Earth's atmosphere during the Cretaceous warmest period?
0
Formula for rising temperatures
4
Estimating meteorological visibility from air chemical and particulate composition