I feel like I am missing something blindingly simple, but I am curious about something.

We are given the velocity of a P-wave as $v_{p} = \sqrt{(K+\frac{4}{3}μ)/ρ}$. So I am to understand conceptually that as density increases, the velocity of the P-wave also increases. However looking at the equation would indicate a lower velocity with increased density. Is it just a matter of the bulk and shear modulus' increasing at a more rapid rate than density as you travel through lower depths?

That is not a silly question! And your intuition is correct: As you bury and compact a sedimentary rock, its porosity will decrease, so its density increases. But we also see that its velocity tends to increase. This appears contrary to what that equation shows.

However, as you bury the rock and decrease its porosity, you are simultaneously increasing the rock's effective stiffness (bulk and shear moduli). And yes, this effect overwhelms the density effect so the outcome is a faster P-wave velocity. So even though the derivation of this equation from continuum mechanics tells us that stiffness and density are independent parameters, they seldom are in nature. Most geological scenarios where density would increase, also raise the effective stiffness of the rock.

But here is an example where this is not the case. Imagine you have sandstone between two shales. The sandstone has some porosity and it is completely filled with brine. If that exact same sandstone (i.e. holding everything else constant) is now filled with gas instead of brine, its Bulk modulus will go down by a lot and Density will also go down but by less. However, according to Gassmann's equations, the Shear modulus will stay constant. So the P-wave velocity goes down because the Bulk modulus effect overwhelms the Density effect and the Shear modulus doesn't change. But now consider the S-wave velocity whose equation is $v_s = \sqrt{μ/ρ}$. In this case there is no Bulk modulus to overwhelm the density and so the S-wave velocity will actually go up by a small amount when the rock is saturated with gas. This is purely a density effect. 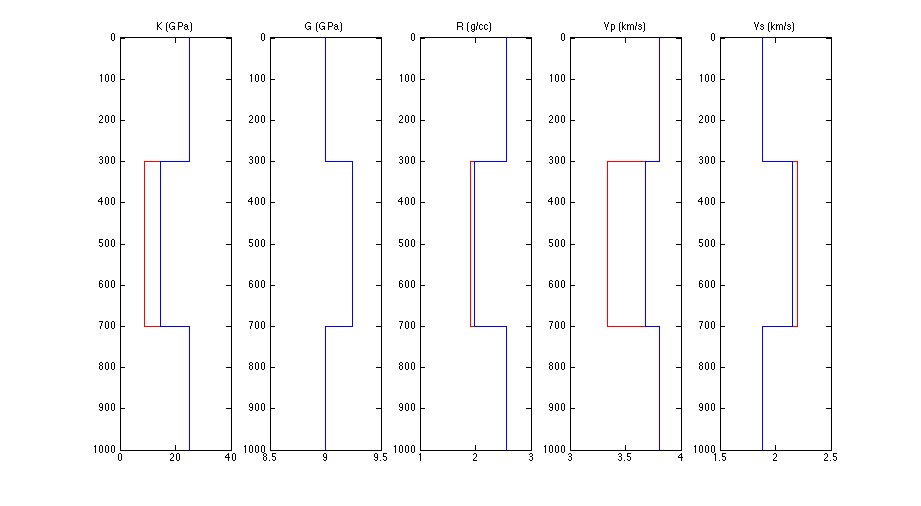 This effect is commonly observed in hydrocarbon exploration where they have drilled a well into a sandstone that is full of water, but then go up dip and find something like an anticline where the same sandstone is now full of gas.

23
How to distinguish P, S, Love, and Rayleigh waves in a seismogram?
22
Are there any techniques for imaging the deep Earth besides seismic waves?
12
Why is ocean surface velocity around 3% of wind velocity?
6
Why is it necessary in seismic imaging to calculate an image of reflection coefficients when one of the inputs is the velocity model?
3
Detecting seismic waves using Software Defined Radio
3
Energy Density of Porous Rocks
2
Does the Earth produces measurable gravity waves?