Why do rivers have 'wells' in mountains?

Why/how can rivers have sources in places high above the sea level?

The presence of water underground has nothing to do with sea level in mountainous country.

When rain fails on a mountain, or snow falls on a mountain and the snow eventually melts, the water from the rain or snow melt mostly travels downhill via rivers to the sea.

If a layer of impervious rock lies under the porous rock or soil, the water cannot move downwards, due to gravity, any further. This can lead to water accumulating in the soil or porous rock and saturating the soil or rock. In such situations an aquifer can form. The top of the saturated zone in an aquifer is called a water table.

What Fred said isn't wrong, but I think it doesn't answer the question very well so let me add some things:

First of all remember that water will always follow the gravitational force, so of course it's flowing downwards. Close to sea level the difference between the gravitational accelerations is almost zero between the spring and the sea. Also most soils on or about sea level are well weathered and thus very thick, they can absorb a lot of water. So as Fred already said those "lower rivers" are mostly just the exposed ground water table, there isn't really that one source.

Now to the difference on mountains. Mostly the higher you go the thinner the soil. Since there's almost no soil there's not much water that can be absorbed. Instead it accumulates in seas until their wall breaks and the water starts to flow downwards. It will then naturally carve it's way through the bedrock. Glaciers can also carve out huge amounts of rock and when melting create rivers that flow that way.

As for the "wells". I think you mean that one point where the water comes out of the mountain. Remember mountains have in most cases higher precipitation and since not much water can be absorbed well it has to come down. When the water hits the ground it seeps through cracks in the rock to the inner mountain. The chemical weathering will cause especially CaCO3 - rich rocks (carbonates) to dissolve. This will create caves (Karst) where the water then accumulates. The water "flows" within the mountain and will at some point create a little hole in the mountain from within. That's where the water then flows out and becomes a river. I think that hole would be your well. 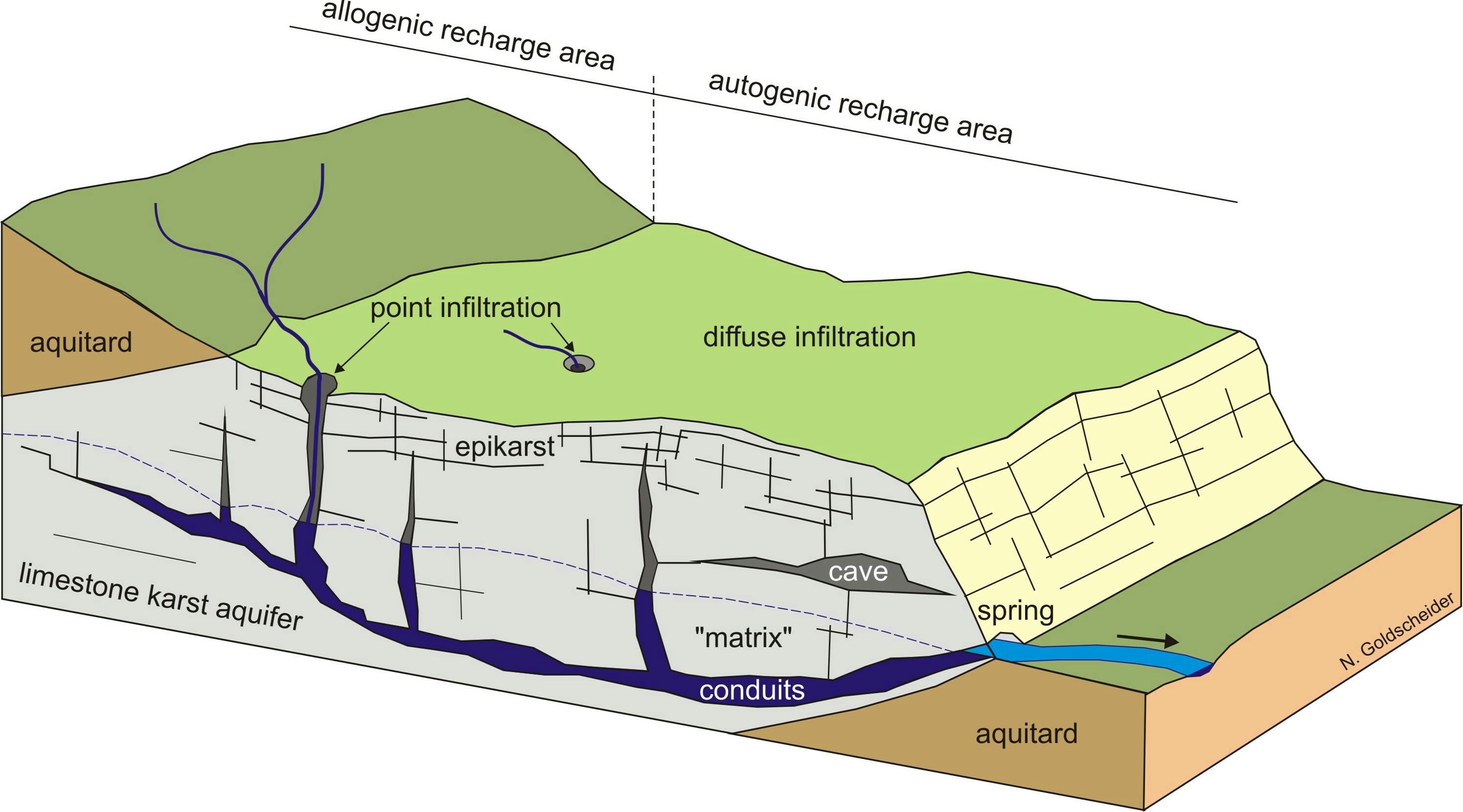 Does your question go into the direction how the water gets 'onto the mountains'? Here is a meteorological-hydrological answer on this:

Of course water, in its liquid form,is strongly determined by the gravitation. However when dissolved as water vapour, it is transported in the atmosphere (atmospheric water transport). Mountains do have an 'orographic effect' on the precipitation distribution in a landscape. This could, very very simplified, be described as follows: When air masses are horizontally moved, mountains represent barriers. The air has to rise onto along the mountains surface. In this upwards movement, the air expands. It gets thinner and can therefore contain less water vapour. In one point, it is oversaturated and begins to rain.

In the Encyclopaedia Britannica, there is a brief explanation with a good explaining figure: http://www.britannica.com/science/orographic-precipitation

If you look at a catchment basin, it is nearly always bordered by mountains. it's because water flows downhill. Altitude is water's motor system.

All the peripheries of the river system are on high points facing roughly towards the interior of the basin.

Any breach in the slope will cause water to flow the other way, and because water and ice lowers the zones it passes through.

The water is very powerful and always forces it's way into a lower valley eventually and creates very large downhill paths over millions of years. The amazon basin and alps ars dozens of millions of years old.

Mountains also get multiple times as much rain as valleys, and valleys are FULL of invisible underground rivulets, whereas mountains often have more over ground flow and less porous sediment. 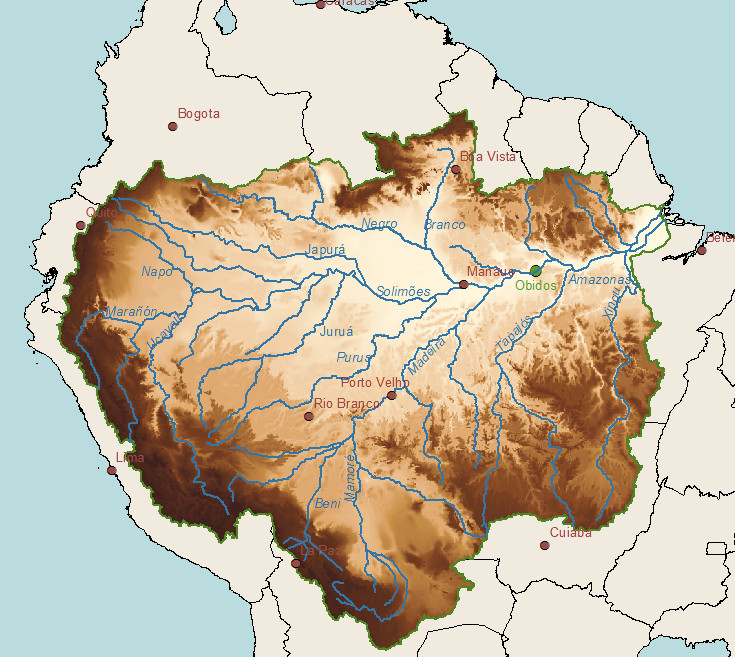 Not the answer you're looking for? Browse other questions tagged hydrology mountains rivers or ask your own question.

19
How do long rivers exist?
8
Why is the Yarkant River braided in the Pamir mountains?
75
Are there any saltwater rivers on Earth?
3
Do any rivers deposit sediment in their deltas fast enough to counteract sea level rise?
7
How do rivers last so long in dry weather?
4
Classification of rivers according to width
4
Could parallel rivers flow in opposite directions?
0
Rivers flowing into Pakistan