What causes such a narrow slit in a cliff? (see photo) 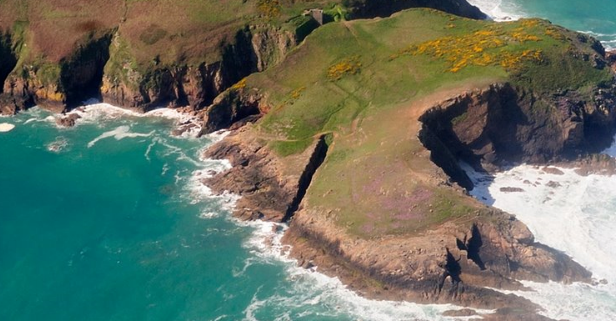 I have this photo as a background image and I often wonder how such a narrow, well-defined slit could be formed. Is it natural or man-made? If natural, what processes could have formed it? The rest of the coastline is rugged but this appears very uniform. It is on the north-west coast of Jersey (UK).

If you see the other user (Jan Doggen's) google maps link, you can see apparently similar features in different states - this is a particularly neat example of a general phenomenon.

These notches form when headlands are undercut by caves carved out by the sea. They may be initiated where there is a fault or jointing in the rock (northwest Jersey is granite, according to google).

In this particular case, the notch seems to have a rounded termination. Blowholes also form from undercutting of headlands producing caves whose roofs then collapse. It's possible this cave may have collapsed after a blowhole formed, so you get a notch where the inland end of the feature appears rounded. That bit is just speculation though.

I found this Jersey geology trail guide that might have more detail: http://jerseygeologytrail.net/Geomorph.shtml

Could be formed by two natural processes. First, some fault with shear zone, which is obviously much weaker than the rock around it and gots weathered faster. Second, could be some vein/dyke of some mineral or rock softer than surrounding rocks.

Not the answer you're looking for? Browse other questions tagged geology geomorphology coastal or ask your own question.

19
How does one measure what causes earthquakes?
20
What causes intra-plate faults, such as the New Madrid fault?
4
What causes variation of seabed depth relative to fixed chart datum?
3
Was there once a glacier over Starcke national park in Queensland Australia?
5
What causes jagged appearance of mountains in SE Asia?
12
What causes these circular swirls of islands?
12
What causes these mound-like ground formations?
5
If the Kola Superdeep Borehole were opened today, what would come out of it?