Are the processes of the rock cycle currently in dynamic equilibrium?

The standard representation of the rock cycle usually looks like this: 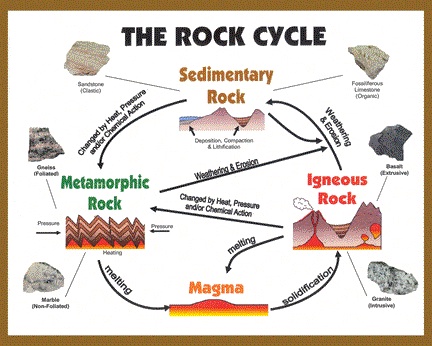 Does each stage of the rock cycle currently balance? That is, are the various processes in dynamic equilibrium, so that the proportions of the different rock types remain constant?

If the processes are not in equilibrium, which types of rock are currently increasing in overall prevalence, and which are decreasing?

It's an interesting question, but in practice I think it's impossible to answer. It's very difficult to measure the rates of many of those processes, and the divisions between rock types can be quite ill-defined (for example, in migmatites). There's no scientific instrument we can point at a chunk of the earth which will tell us "in this region, 29.4 megatons of sedimentary rock became metamorphic rock during the past year".

What we can say, at least, is that the global balance of these processes is not constant over time. For example, during the Deccan Traps eruptions there was an increase in the rate of formation of igneous rock through solidification of magma.

The classic rock cycle diagram you posted probably encourages this kind of question, because it makes it look like a neat, closed system with well-defined boundaries and comparable quantities of each rock type. It's a very useful simplification for many purposes, but remember that these processes are occurring at or near the earth's surface. This whole system sits on top of the mantle (which is vast compared to the volume of crustal rock), and material is continually being passed between the two, so it's far from being a closed system.

These factors and others more should modify the proportion of rock kinds.

Not the answer you're looking for? Browse other questions tagged geology rocks petrology geodynamics or ask your own question.

9
How has the relative ratio of igneous, sedimentary, and metamorphic rocks changed over Earth's history?
35
Why is Earth's age given by dating meteorites rather than its own rocks?

16
What is a good definition of the word "rock" for teaching?
14
How are the patterns in solid rock born
14
What are the causes of the supercontinent cycle?
7
Recreating the rock cycle
22
What was the first rock in the rock cycle?
4
Any idea what are these circular rock marks?
5
There are cloud identification guides, are there also (guided) rock identification websites?
3
Are there any differences between the subalkali and alkali rock occuring tectonic environments?
3
Are we observing sedimentary rock formation today?
4
What affects where a terrain will be rocky or grassy?