Can ultrasounds be used to map the density of large underground regions?

This question arose from a related one at Physics.SE, along with my own personal quest to better understand mineralogical prospecting.

I want to know if some kind of ultrasound machine can determine the density of rock, soil, or mountains. Could it see everything within range? For example, could it see a region of high density and a region of low density behind it? Or would one block the other? What would the range be?

And how accurate would it be (in density readings and exact location readings)? More accurate than a gravimetric map?

I'm asking because I want to know if ultrasounds can be used for mineralogic prospecting (exploring for ores that can be mined). It seems like it would be a lot easier to use ultrasounds than to dig a lot of exploratory shafts.

Sound-like waves are routinely used to image the subsurface, but mostly well below the ultra-sound band.

What do you mean, 'sound-like'?

I say 'sound-like', because we normally think of sound as a vibration that we can hear, conducted through air or maybe water or building materials. In seismic methods — such as we might use prospecting for minerals, oil and gas, water, geothermal resources, etc. — we use very low frequencies, typically in the 4–256 Hz range (about 6 octaves). You can certainly hear some of these frequencies, but not those below about 20 Hz, which are often the strongest frequencies in our signal.

Why is seismic reflection such a big deal?

From thousands of field recordings, usually shot in a grid over a land or marine area, we can reconstruct an image of the subsurface using a process called tomography. The data might be 2D (a vertical cross-section) or 3D (a volume, analogous to a CAT scan). In some cases, this image is excellent and reveals a great deal about the geology of the region. Here's an example from a paper by Moore et al. (Science, November 2007): 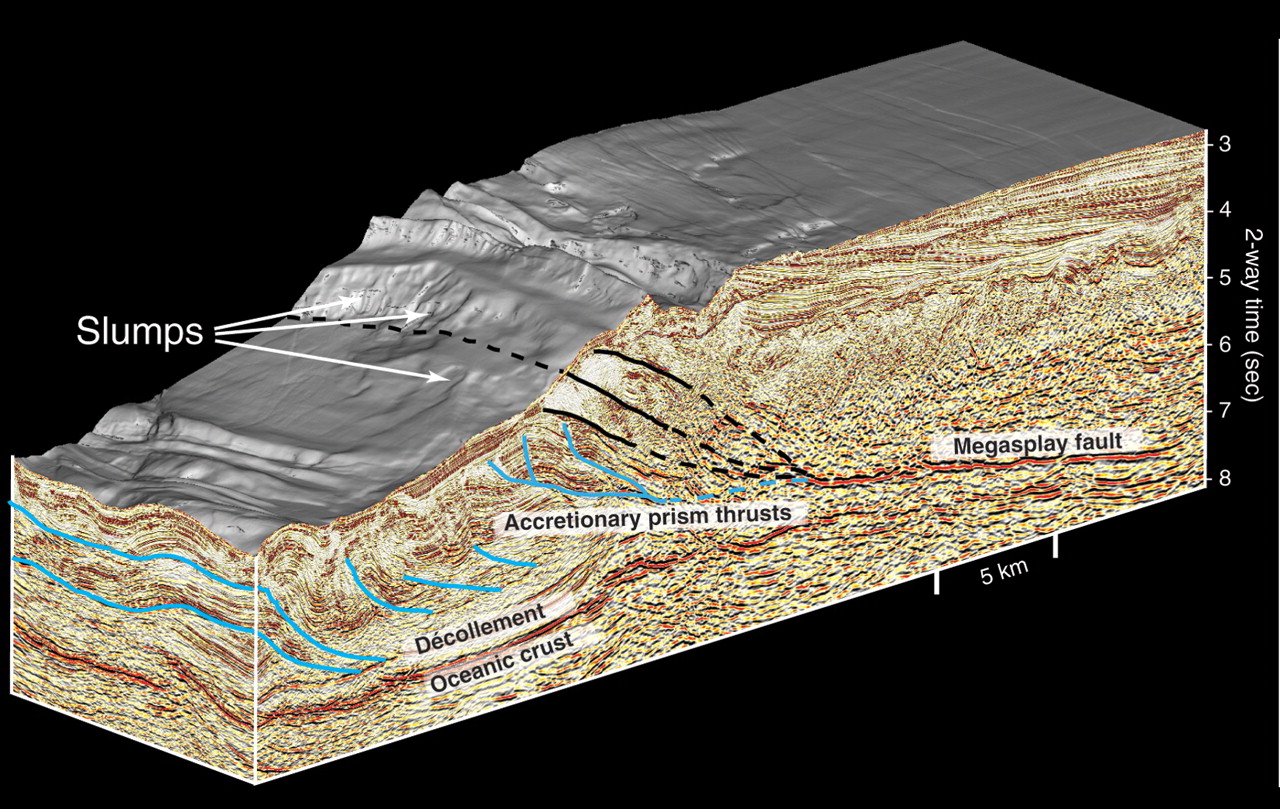 How much can you see?

A large survey might be hundreds of square kilometres, or many tens of kilometres long in the case of 2D data. We can image well down to about 6–8 km, and we can image something down to about 20 km. The typical resolution of seismic is on the order of tens of metres horizontally and a few metres vertically (about a quarter of a wavelength). This is much better than gravity or magnetics. You might think, "Why not use higher frequencies for imaging — surely you'd see more?" Yes! We would love to use ultrasound (say) for imaging. The problem is that high frequencies are absorbed more efficiently by the medium (mostly rock and water) and actually heat it up very slightly.

What can you find out with sound?

In many cases, we can go beyond an image of the subsurface and deduce some physical properties of the earth, especially the speed of sound in the rock and the density of the rock. Sound reflections depend on changes in acoustic impedance, and are dependent on the incidence angle, so all the physics really stems from that relationship.

What about acoustic logging?

Acoustic logging or sonic logging is an important counterpart to seismic imaging, because the logs — run along a borehole using special tools — are the best link between the acoustic properties of the rock. They thus link us to the seismic image that depends on those acoustic properties. So we don't image anything with this data, because it's one dimensional, but it's a key calibration point. Acoustic logging does use ultrasound in the 20 kHz range, but the attenuation issue is not a problem in the vicinity of the borehole.

Not the answer you're looking for? Browse other questions tagged geology mineralogy mining or ask your own question.

17
When can taste be used to help identify rocks?
18
Why are minerals found in “large” quantities and not scattered throughout the earth as individual atoms?
13
What are the high field strength and large ion lithophile (HFS or HFSE & LIL or LILE) elements?
8
What is the long term impact of large scale removal of material from subterraneal caches on the structural integrity of the soil?
1
What other graphical methods can be used to represent weathering?
5
At what depth does the underground begin to warm up?
5
Using acoustics to measure the composition, density, and hardness of layers
1
How do geologists measure green house gass emmissions from large regions