How to determine the transmissivity of a system of rocks and faults from the stationary drawdown pattern?

I have a dataset containing high frequency measurements of the hydraulic head at different locations in a 5x6km area. Also known are the precipitation, evaporation, and pumped discharges from a number of wells (unfortunately only monthly totals for the latter). Using the Menyanthes software, timeseries analysis is performed returning the stationary drawdown at each location as a result of the groundwater withdrawal. 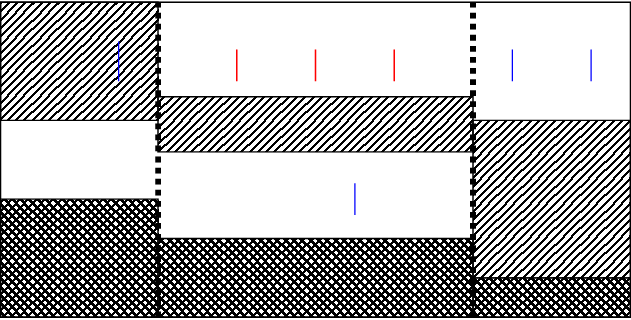 From the calculated drawdown at each location I want to calculate (or at least estimate) the transmissivity of each aquifer so I can hopefully tell a bit more about the resistance caused by the faults (by smeared out clay layers mostly). I know of the Thiem and Theis models (see for example this article) for the drawdown in equilibrium and fluctuating situations, but are there any other models around that might be helpful to determine the geohydrological properties of the different compartments?

I realise this question probably doesn't have a single conclusive answer, but I think it is relevant for this site anyway as it tries to compare the available models/equations for evaluation of a definitely on-topic problem.

I would suggest Bense (Hydrologische Karakterisering van Breukzones in Zuid-Oost Nederland), as a starting point. It provides a clear view of a few methods used in the past and an indication of the level of detail needed for the analysis, possibly helping you narrow down your search to a suitable method. Mostly Dutch (not a problem, judging by your name), but few international sources too.

I have attempted to ascertain something similar in a spatial model (MODFLOW) recently. From experience, I can tell you that the placement of measurement locations is vital, especially when estimating fault resistances. In my case, the available observations offered no evidence supporting the presence of a fault, even though upward seepage and indicator species were widely observed.

Not the answer you're looking for? Browse other questions tagged measurements models hydrology or ask your own question.

11
How do we determine subsurface composition?
5
How to determine that sustained wind speed exceeded the threshold value?
10
How to run earth system, land surface and climate models?
4
Run Hydrus-1D from the command line
4
How is land subsidence measured?
2
How to estimate the runoff time for my area?