What is the economic importance of large meteorite impact craters with a diameter over 100 m? Can they form diamonds or produce other economic deposits?

Yes, diamonds can form in meteorite impacts. For this several things need to happen:

If you have a meteorite hitting granite or ocean you're not going to get any diamonds. It usually has to hit something that has biogenic carbon (let's say peat, coal, graphite). Even then, the diamonds will form only in a very specific distance from ground zero, because there is a specific relation between pressure and temperature that has to hold. Pressure has to be high enough to stabilise diamonds, it has to be hot enough to break the graphite carbon bonds, but not too hot to destabilise diamond. This is why it also depends on the size and velocity of the meteorite - only some will make these unique conditions happen. A notable case is the Popigai crater in Russia (that has some weird stuff in it). Another case is the stuff found in the peat around the Tunguska event.

However, calling the material that forms "diamond" does not say much about what it's actually like. In some cases, it's not even proper diamond, but rather a carbon polymorph called lonsdaleite, which is some kind of "hexagonal diamond" which has lower hardness than real diamond. Impact diamonds are also usually not pretty, so they're not suitable as gemstones in jewelry. If anything, they're useful as industrial diamonds. The thing is, that making industrial diamonds synthetically is much easier than digging them up from these locations. So, the answer is no. The economical significance of meteorite impact craters in relation to diamond formation is negligible.

Pretty diamonds usually form in Earth's mantle and are brought up to the surface in volcanic eruptions. They are mined from volcanic pipes such as kimberlites, and even though some of them are named like they're impact craters (like the Crater of Diamonds State Park) they are not actually impact craters.

There is one notable occurrence of an impact crater that did cause economic mineralisation of something: the Sudbury Igneous Complex, or the Sudbury Basic, in Canada. In here, a meteorite impact caused melting of the crust and the formation of a nickel deposit. Currently, nickel, copper and some noble metals are mined from there. Even though it has been known for more than 100 years, only in the past 30 years or so the impact origin of it has been fully accepted.

Nowadays impact craters are of little significance. Back in the Hadean era of early planetary crust formation, bolide impacts were the defining process of planetary evolution. As for diamonds, one might expect micro-diamonds to be formed in rare instances of carbon-rich impact craters. On the other hand, back in the days of early lunar exploration, some earth scientists expected abundant impact diamonds to be found on the moon's surface. They even tooled up a special laboratory to analyze diamonds brought back from the moon. Alas, none were found.

It's worth noting that our planet was formed by "meteorite" impacts and that our own moon is the (geologically important) result of Mars smacking into our planet, but let's focus on impacts after, say, the Archaen.

If we lived on the moon, impact craters would pretty important to our geology. As it is, it's perhaps a lot more important to our biology than to our geology, though strictly by association. For one thing, every meteorite that has ever hit an ocean basin (almost %75 of the earth's surface) has been plowed into a subduction zone; that includes monsters over 100km in diameter. As for those whose erosional remnants can be found on continents, finding them isn't easy and interpreting their formation isn't without controversy. In fact, finding many of them is a matter of walking back specific meteorite-related minerals to a likely source and focusing there.

As for diamonds, their occurrence in impacts is rare and, economic importance, rarer still. From Charlie Murphy's paper, Economic Mineral Deposits in Impact Structures: A Review

As for economically important placer occurrences of industrial-grade diamonds, their source is still controversial. Geochemistry may prove a kimberlite source for these diamonds....just like those in South Africa. 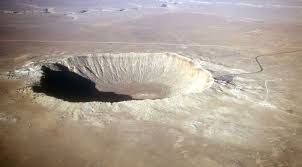 A little bit of lunar scenery, here on earth.

A useful article on impact structures and ore deposits is:

Not the answer you're looking for? Browse other questions tagged geology economic-geology meteorite diamond or ask your own question.

17
What temperature do small meteorites have on impact
12
How deep was the Vredefort Crater when it happened?
23
Why do crystals, like quartz and diamonds, form in different colors?
13
What is it about ancient craton geology that results in associated kimberlite pipes containing economic diamond deposits?
16
Can impact events cause widespread volcanic activity on the other side of the planet?
6
Can a cosmic impact break Earth's crust in large area exposing the magma ocean?
9
Impact craters vs volcanic explosions on Mars
8
Could diamonds be formed from coal?
1
Question Concerning Meteorite Ejecta Travel