How big a risk is Mount Vesuvius for the local population?

How much of a risk does Mount Vesuvius pose for the population of the surrounding area?

There are lot of studies on the past activity of Mount Vesuvius. Eruptive deposits have been studied and dated in order to reconstruct the type and timing of past eruptions. This can give some indication of what to expect even if, and I cannot stress this enough, past activity patterns of a given volcano do not predict its future activity. It can give a tendency, but volcanoes remain unpredictable, as shown by recent examples in well-monitored countries like Japan (Mount Ontake 2014 eruption) or Italy (paroxysmal eruptions at Stromboli in summer 2019).

That being said, a study by Cioni et al. (2008) came up with some interesting results. They found that there is a positive correlation between the magnitude of an eruption and the repose time before this eruption, i.e., the longer we wait before an eruption of Vesuvius, the larger the eruption will be. It's their figure 6: 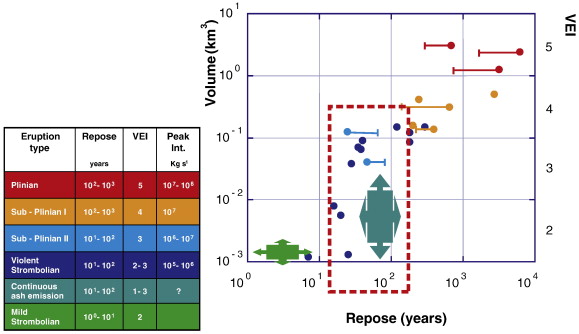 You can see that Strombolian (= small) eruptions happen after a few years of repose while sub-Plinian and Plinian (= large, like the one that destroyed Pompei) eruptions are preceded by long repose periods. However there is some scattering, especially in the zone shown by a red box:

In particular, a large variability in the magnitude and eruption style of the past eruptions is apparent for a window of repose time from dozens to hundreds of years.

And now we are exactly in this box: the last eruption of Vesuvius was in 1944, 77 years ago. So according to this study, and assuming the volcano will keep following this pattern (which is not sure), if Vesuvius does erupt tomorrow, it could be up to a violent Strombolian eruption. This type of eruption would not be a major threat to the local population; the main threat is pyroclastic density currents, which happen mostly with sub-Plinian and Plinian eruptions (their Table 2). The last eruption (1944) falls in the "violent Strombolian" category; lava flows destroyed several villages, but no one was killed.

Not the answer you're looking for? Browse other questions tagged volcanology volcanic-hazard natural-disasters or ask your own question.

11
What geological processes affect the speed of Kilauea lava flows?
19
Is there any consensus of what caused the Lusi Mud Volcano eruptions in Indonesia?
5
how are the global effects of local environmental disasters?
2
What does the term spreading the risk mean, with regard to natural disasters?
10
Can human activity affect volcanoes?
7
Is there a 'standard size' for volcanic eruptions in terms of gas output?
4
Why do human populations concentrate near fault lines, volcanoes, etc.?
3
how high was mount vesuvius (mount somma?) before it erupted in AD 79?
6
How is climate change today different than the climate change that ended the ice age(s)?