If we assume the mega impact hypothesis for the formation of Moon, where on Earth is the impact point?

Given that Pangaea had C-shape can we assume that the point of impact was in the center of this C-shape? In modern world it would be under Tibet? 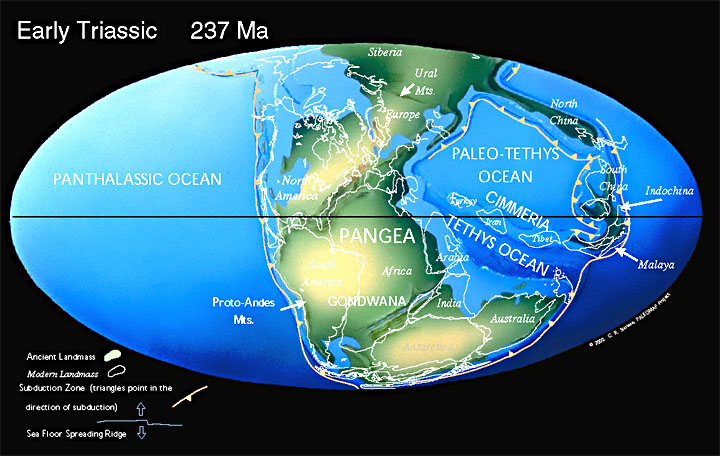 Or should we assume the oldest shape of the supercontinent was circular so that the impact point was somewhere in North America?

plate-tectonics earth-history impacts
Share
Improve this question
edited May 12, 2016 at 23:09

I think you are confused about the timescales and the magnitude of the impact that is being talked about here.

In addition, based on computer simulations of the impact, we know that the impactor mass must have been on the order of 0.1 Earth masses and the initial impactor velocity must have been something like 5 km/s. This means that a colossal quantity of energy would have been released by the impact which would completely reshape any surface structure (and much of the internal structure) that the Earth may have had at that early stage. Indeed, a significant quantity of the mass of the two impactors was put into orbit around the Earth by the impact, either as solid debris, some of which coalesced to form the Moon, or as vaporised rock. Due to the complete lack of direct evidence, it is difficult to determine the exact impact parameters, including the impact angle. Some simulations suggest a fairly moderate angle of impact of around 45° [1], but there is some geochemical evidence from the Moon to suggest a higher angle of impact, with higher energies involved [2][3].

Not the answer you're looking for? Browse other questions tagged plate-tectonics earth-history impacts or ask your own question.

8
What are the geological mechanisms for sea floor spreading in the Bismarck Sea?
10
What does geochemical data tell us about Earth's earliest palaeoclimatic conditions?
8
Earth and moon have different mantle compositions. Is this a fatal flaw in the 'Giant Impact hypothesis'?
3
What was the percentage of land mass in prehistoric times when temperatures were high enough that we had no ice caps?
6
What Caused The Sea Levels to Drop During the Maastrichtian Epoch?