What are the major contributors to the amount of infra-red emitted by the earth? 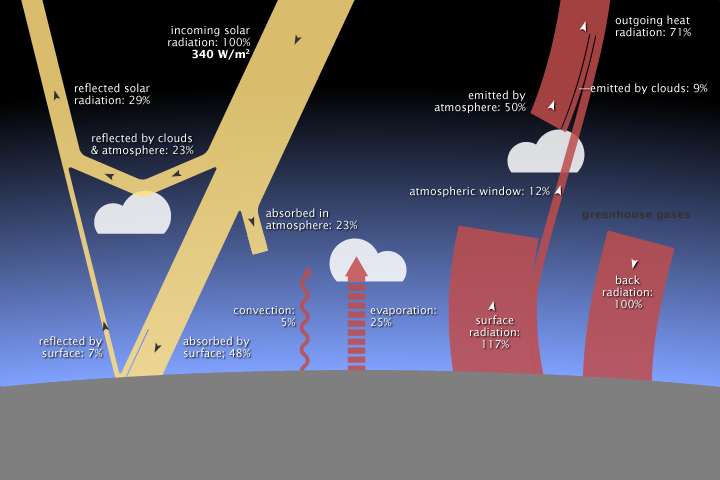 My question is what are the principal components of this 'equation'? I imagine the percentage of water in the atmosphere and on the surface of the earth, the mean absorptive ability of the non-water surfaces of the earth, and, what is most mysterious to me, what is the 'factor' of infra-red production by different surface materials. I imagine this is all highly technical and finely detailed in large elaborate models, but are there 'big levers' that represent most of the infra-red radiative effect? Where I am 'headed with' this, of course, is if there is a practical way to increase this radiation back to space that can make a positive difference on global warming (ie net positive radiation into space after accounting for increased greenhouse gases back radiation)? And I imagine there is not, given we are not trying that.

It depends on the wavelength. 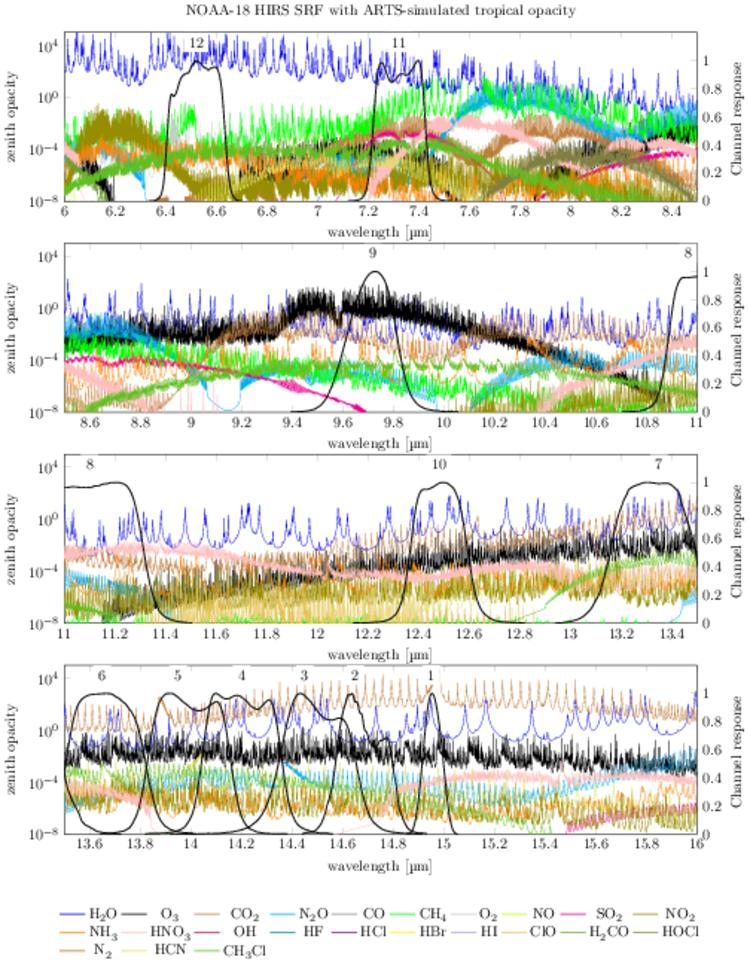 The figure shows the most absorbing species between 6 and 16 µm for a U.S. standard tropical atmosphere (Note: this figure does NOT include the Earth's surface!). Absorption data is taken from Anderson et. al (1986) and simulations are performed with the open-source Atmospheric Radiative Transfer Simulator (ARTS; Eriksson et al., 2011). The plotting was carried out with LaTeX and pgfplots. ARTS is open-source and includes the Anderson et al. data, so you can try different wavelengths for yourself.

Depending on wavelength, we have dominant absorption from H₂O, O₃, CO₂, N₂O, CH₄, and others.

Q: What radiates energy back into space?
A: anything above absolute zero temperature. That is, absolutely everything, according to the Stephan-Boltzman's law: $$W = \sigma T^4$$

Where $\sigma$ is the Stephan-Boltzman constant and $T$ is the absolute temperature. So of course, volcanoes, steel foundries, forest fires, etc emit a disproportionate amount of energy, but the vast majority of radiant IR energy is just from everyday objects - such as me and you. Some insects, such as honey bees, which can see in the infra red, rely upon this radiant energy to find their pollen. Without this background radiant energy the world would feel a lot colder than it actually is. So the main contributor to the infrared is nothing special - just the equatorial regions generally. One might also add a few ephemeral mid-latitude high temperature anomalies caused by the ocean-continent configuration, and transient effects of Rayleigh waves.

What is most mysterious to me, what is the 'factor' of infra-red production by different surface materials.

In asking about different surface materials, you are missing the big picture. If you want to understand global warming, simply look at the big picture you provided in the question. The Earth's surface receives more than twice as much energy in the form of thermal radiation from the atmosphere and clouds than it receives directly as sunlight. It's the greenhouse gases you need to focus on, not surface materials.

My question is what are the principal components of this 'equation'?

It's the greenhouse gases in the air. Once again, look at the image you supplied in the question. Most of the outgoing radiation is emitted by the atmosphere and by clouds. Only 17% of the outgoing energy comes directly from the ground.

Is there a practical way to increase this radiation back to space that can make a positive difference on global warming?

38
What would be the temperature of earth if there was no atmosphere?
6
Does earth itself emit electromagnetic waves?

5
Equation for solar radiation at a given latitude?
6
What is the ratio of infra-red light absorbed by green house gases?
7
How can we calculate the temperature of the atmosphere, including the greenhouse effect?
1
Understanding a diagram of Earth's radiation balance
4
Effective Temperature of a Planet and Surface Temperature due to Greenhouse Effect
1
Can anyone explain the reason why CO$_2$ increases global temperatures (not the simplistic greenhouse analogy provided for public consumption)?
3
How does Earth's thermal radiation into space vary by location and time of day?
2
Relation between Magnitude of Greenhouse Effect and the Concentration of GHGs like $CO_2$
8
Is there a simple model for the interaction between greenhouse gases and infrared radiation?