What factors bring sand into or out of the beach?

I like to walk my dog along a beach, but in medium to high tide, there is no beach at all, as the water reaches the bluffs. 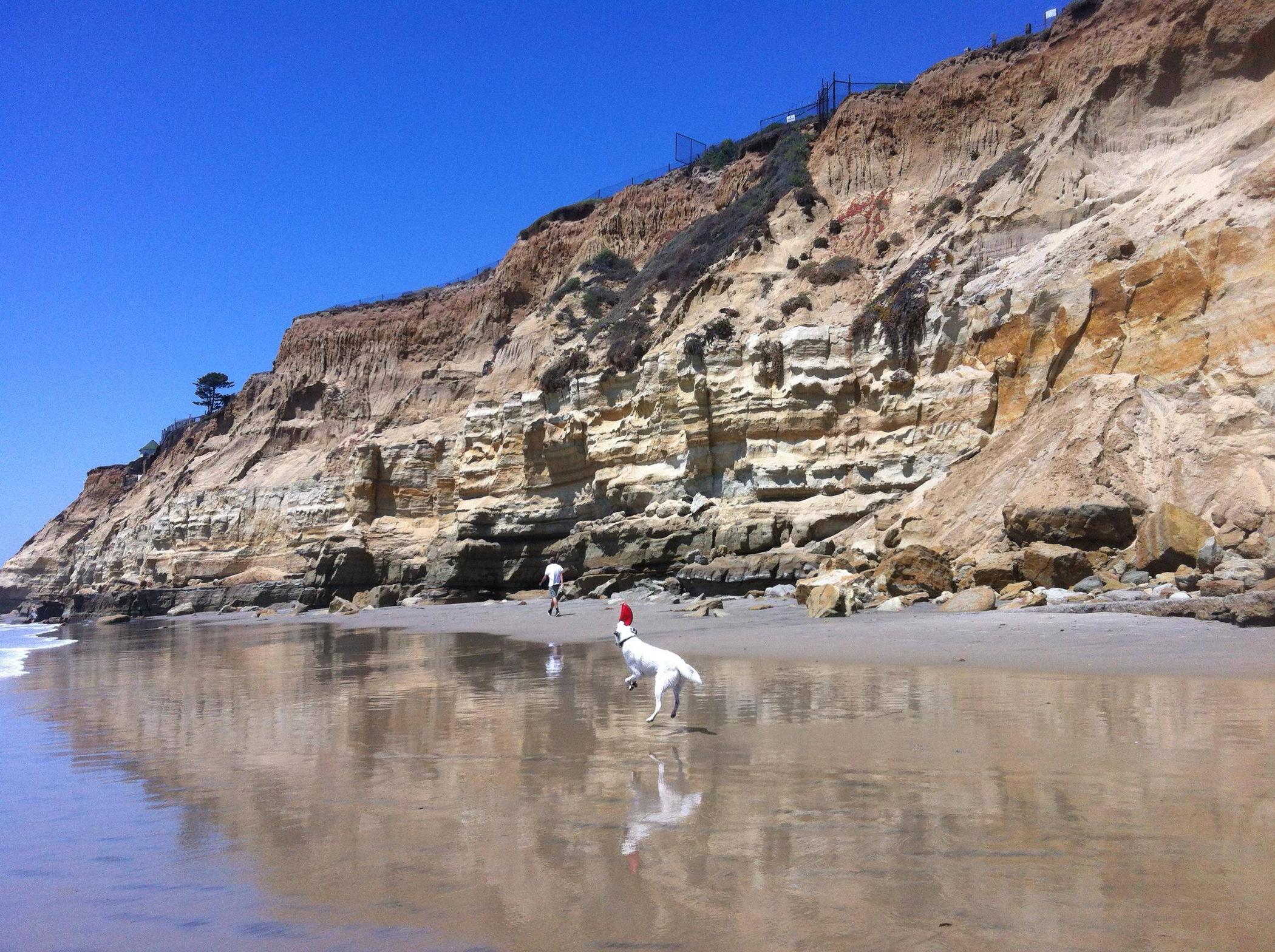 The thing is, the height of the sand seems to vary drastically as well. Sometimes, I'll be fine walking at medium-high tide because so much sand has deposited that there's still a path. (I first noticed this when I couldn't find the usual caves and crevices along my walk—I realized they were buried in six feet of sand.) Other times, even at low tide some of the waves reach my ankles, even the cliffs. In those times, I also end up walking on rock instead of sand at parts, and can see this rockbed extend out toward the break.

What brings the sand in or out?

I know the obvious answer is the incoming or outgoing tide, but I've walked at low tide when the sand was very, very high (therefore, didn't flush out with the tide), such that the beach seemed gigantic. I've also gone surfing in high tide when I couldn't stand on my feet near the bluffs, because the sand never came in. And I don't think it can be rip currents since the sand height is more or less uniform throughout the beach.

ocean sedimentology coastal
Share
Improve this question
edited May 23 '16 at 12:25

The amount of sand on the beach at any one time is a dynamic quasi-equilibrium between a whole raft of processes. These include wave power, frequency and direction, seabed angle, longshore drift, rips and undertow, wind strength, direction and continuity, fetch, coastal geomorphology, sediment availability, offshore currents, and probably other variables.

The entire system is too complex to summarize here, so I recommend Robin Davidson-Arnott's excellent book: 'An introduction to coastal processes and geomorphology'. Cambridge University Press, 2010.

There's a huge literature on this problem, and depending on who you ask you will get different answers. I'll come at it from the geomorphology perspective.

The most uninformative explanation is that sand moves around by the action of water or air. But, how it does so is dependent upon the beach feature/aspect you're trying to describe. Air moves individual grains around by picking them up and carrying them on short trajectories, hops, and collisions with the dry sand bed. Depending on the wind direction, sand is either moved further down the beach, or into the water (or off the beach completely). Windy days are really when this happens.

Water is more complicated. The two dominant processes are alongshore currents and large storm events. Over long times, large areas, and from the birds eye view, shore parallel currents cause the beach to become wider or narrower. These currents are energized by waves and they carry sand along with them. When currents converge or diverge you have a net gain or loss of sand causing the beach to erode or accrete. For a net gain (accretion), imagine a highway traffic jam: the convergence of cars would be analogous to the a buildup of sand. So sand isn't really being brought in perpendicular to the coastline, instead it's being carried parallel to the beach in the shore parallel current and the traffic-jamming (or the opposite) of the current-carrying sand leads to an accumulation of sand (or net loss).

Storms move massive amounts of sand around, but are really punctuated events (compared to continuous alongshore currents). Waves associated with the storm do drive alongshore currents, and so are subject to the same traffic-jam dynamics mentioned before. But they also move sand around in other ways too. For instance, on barrier islands storms are responsible for the sediment 'over-wash' process, which looks like a tongue/blob of sand extending from the front to the back of the island.

Beach cusps are an interesting feature too (google 'self-organized beach cusps'), but note that the explanation for their formation is debated. Again, it's the water moving sand around, but this is not helpful for describing why a highly repetitious pattern occurs. Personally I believe the only way to explain the dynamics is through the complex-system perspective, which suggests that many of the features you see are 'self-organizing', in short meaning that the sum of the parts (individual grains of sand being moved by water and air) is not equal to the whole (large scale organization).

This all goes to say, we know that water and air move sand around at the scale of individual grains, but how these processes translate to larger scale movements is a difficult problem and is actively being researched. The short answer is, in order to understand how sand is moving around, you have to decide to some extent what feature or aspect of the beach you are interested in, what time scale, and what spatial scale.

Not the answer you're looking for? Browse other questions tagged ocean sedimentology coastal or ask your own question.

25
What is responsible for the underwater waterfall illusion of Mauritius Island?
12
How does the sand appear on Hawaiian beaches
10
What visual wave behaviour help to tell if a tide is going in or out?
4
What are the mechanisms maintaining the Dune of Pilat?
6
Sand on the beaches of Kanyakumari, India
5
What is the earliest sedimentation we know of?
8
How much garbage goes into the Pacific Ocean every year?
4
Are beaches found all along the coast? If not, what is required for them to be formed?
3
When sediments are deposited, do they sink into the earth?