In this paper by Muller and Garrett it is stated:

It is a standard expectation that currents in the ocean interior with frequencies much less than the Coriolis frequency will lead to an Ekman flux in the frictionally influenced boundary layer near a solid boundary, and that convergence or divergence of this flux will have a back effect on the interior currents.

I do not quite understand what is the frequency of a current. How does it dynamically relate to the Coriolis frequency?

Ocean currents can be described as flow oscillations that are forced at different frequencies. In the absence of any external forces (wind, friction), the resulting flow is the inertial motion, which is the response to the balance between Coriolis and inertia. The Coriolis parameter, $f$, can be described as a frequency: the effective planetary rotation frequency of a parcel of water. So, $f$ is called Coriolis frequency or inertial frequency. 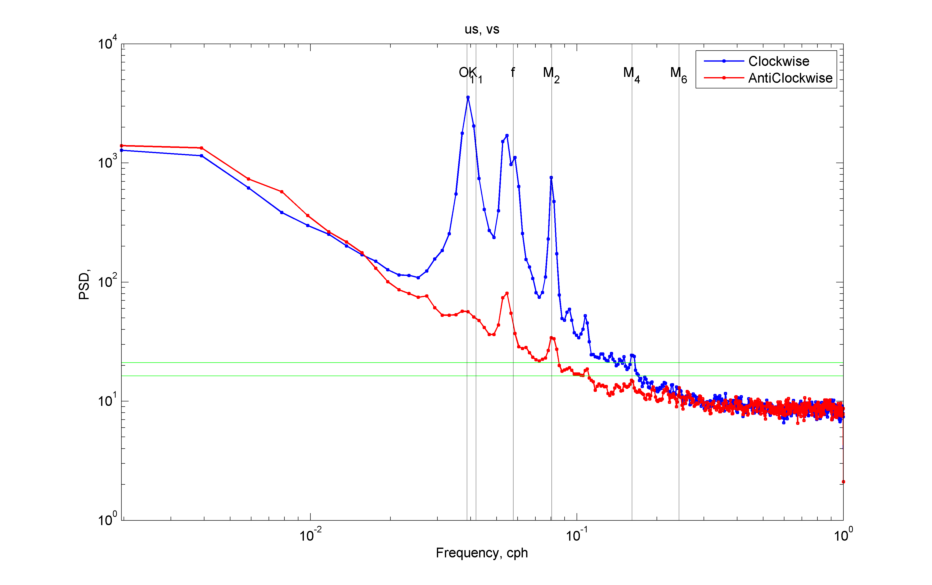 In the real ocean, the balance between planetary vorticity (Coriolis) and inertia is only part of the story. There are usually other forces acting on the flow. For instance, when the balance is between Coriolis and the pressure gradient, we end up with the geostrophic balance. The resulting geostrophic currents can be described as a zero-frequency motion as there is no acceleration (steady-state).

Another important force is the effect of the wind. When we consider the balance between Coriolis (planetary rotation) and the frictional force (stress) caused by the wind, the balance results in Ekman flow. In the Ekman case, the mixing in the layer near the surface (boundary layer) needs to be considered. The same type of balance is present in the ocean in the vicinity of the bottom, as another boundary layer is established there for the flow to go to zero at the bottom. The resulting effect of these frictional forces is that the flow does no longer oscillate at inertial frequencies.

In the paper you mention, they describe how the frictional effects near the boundary (Ekman balance) influence the interior flow. The interior of the ocean tends to be in geostrophic balance (frequencies smaller than inertial). The boundary flow effects tend to propagate into the interior modifying the geostrophic balance. A good example of this effect is Ekman pumping: cyclonic winds cause Ekman transport, that in turn causes a surface divergence, and in order to balance the flow, result in vertical flow (upwelling). This effect is called Ekman pumping and modifies the interior flow to compensate boundary flows.

Not the answer you're looking for? Browse other questions tagged oceanography ocean-currents coriolis or ask your own question.

3
Why an inertial gyro has a frequency and a geostrophic gyro does not?