How to find/calculate the yearly evaporation of a given area?

What I am asking, is exactly the opposite of the yearly rain. It is well measured and it has century long databases.

Consider a given, generally dry area. What I am trying to know: if this area wouldn't be dry, but it would be an open water surface (for example, a sea), but without any water resupply (i.e. rain), what would be the yearly level loss by evaporation?

I think, this information would be useful to calculate the irrigation need of not arable territories because of the lack of rain.

Additional difficulty: in case of larger areas, this evaporation rate would be probably smaller, because the winds in the central regions get moisture on the borders.

I suspect, calculating this would require a relative complex weather simulation, which is not available on the enthusiast level. But maybe some fist rule, estimation or already existing databases can exist.

What you are asking is one of the most difficult issues in hydrology. The evaporation from open water is a function of air temperature, water temperature, humidity, wind speed and fetch, water depth, water salinity, degree of thermal stratification, and boundary effects (as you correctly point out). It is certainly not a trivial calculation! As a first approximation you can apply an empirical coefficient to class-A pan evaporation data, but don't expect any great accuracy.

But then you progress towards a further aim of calculating a potential irrigation need. For this purpose I would say that calculating open water evaporation is completely the wrong approach. Rather, calculate the potential evapotranspiration ('ET0'), and then apply appropriate crop factors, as explained in the FAO documentation: http://www.fao.org/docrep/s2022e/s2022e07.htm
Calculating ET0 is best done using the Penmann-Monteith equation, which is horribly complicated, but there are web sites where you can do the calculations on line. You will need monthly or dekad climate data for the crop(s) you envisage growing. This will be max and min temperature, humidity, average wind speed and average daily hours of bright sunshine. You will also need latitude, longitude and altitude to estimate the solar radiation. Even with all this data, it is a fairly lengthy calculation, but it is your best bet at realistic crop water requirements.

In Australia, such data is gridded to produce images like this one, from the Australian Bureau of Meteorology. 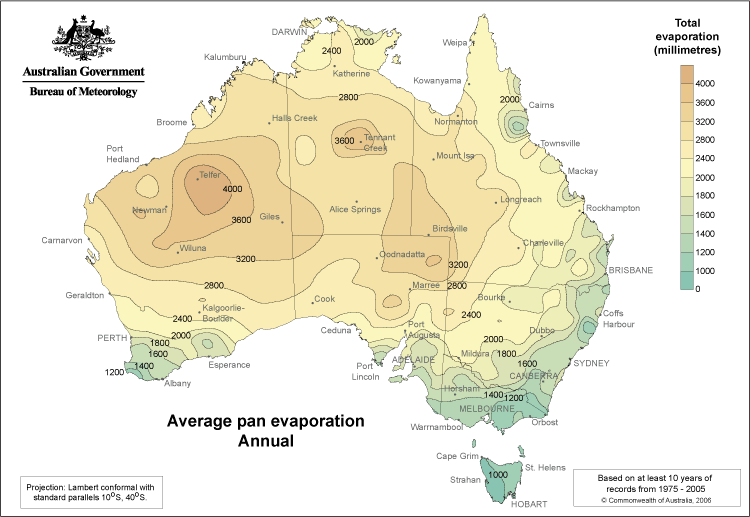 Not the answer you're looking for? Browse other questions tagged meteorology evaporation or ask your own question.

18
Can climate models reliably predict meteorological extremes?
6
What type of storm cloud is this?
7
In general, does the presence of vegetation increase/decrease gross water loss (evapotranspiration) compared to barren land (evaporation only)?
3
Simulating rainy weather
5
Why is this area colder than the surrounding hotter area?
0
Where can I find information about monthly seasonal change in a given area?
4
Which ocean evaporates the most water per surface area?
17
Ways to make a "How hard is it raining?" detector for personal use?