What keeps water from sinking into earth?

I remember reading somewhere that there's evidence of water on Mars but it all sank into the Martian soil. So what prevents that happening on earth?

Some people say it's because the crust is not permeable to water, but that must be nonsense because of volcanic actions and earthquakes, there certainly will be cracks that allow water to flow through. So the only thing that prevents the water from sinking in is the temperature, right?

So what prevents that happening on earth?

Not much. Quite a lot of water is recycled into the Earth's crust and mantle.

So the only thing that prevents the water from sinking in is the temperature, right?

That's part of the story. For our discussion, water can exist in two forms:

Molecular water can react with rocks and minerals to form hydrous minerals and get trapped as structural water (similar to adding water to Portland cement in the making of concrete), and hydrous minerals can be heated enough to release this water (usually requiring hundreds of degrees).

Let's look at some examples of how this thing might work.

Oceans have mid ocean ridges, where the oceanic lithosphere is being formed. This area has very shallow magma chambers so the rock is extremely hot. Water that percolates down through cracks gets heated to a large degree, lowering the density and increasing the buoyancy of the water. This water then goes back up through hydrothermal vents on the seafloor. Here's a spectacular video of some of those things:

When the water goes down, not all of it goes back up. It also reacts with the rock, forming hydrous minerals. For example, anorthite (CaAl2Si2O8), a common mineral in basalts, is hydrated to epidote-clinozoisite: Ca2Al3Si3O12(OH). In some occasions, oceanic crust can be uplifted and is then exposed. One example is Cyprus, where you can see features like this: 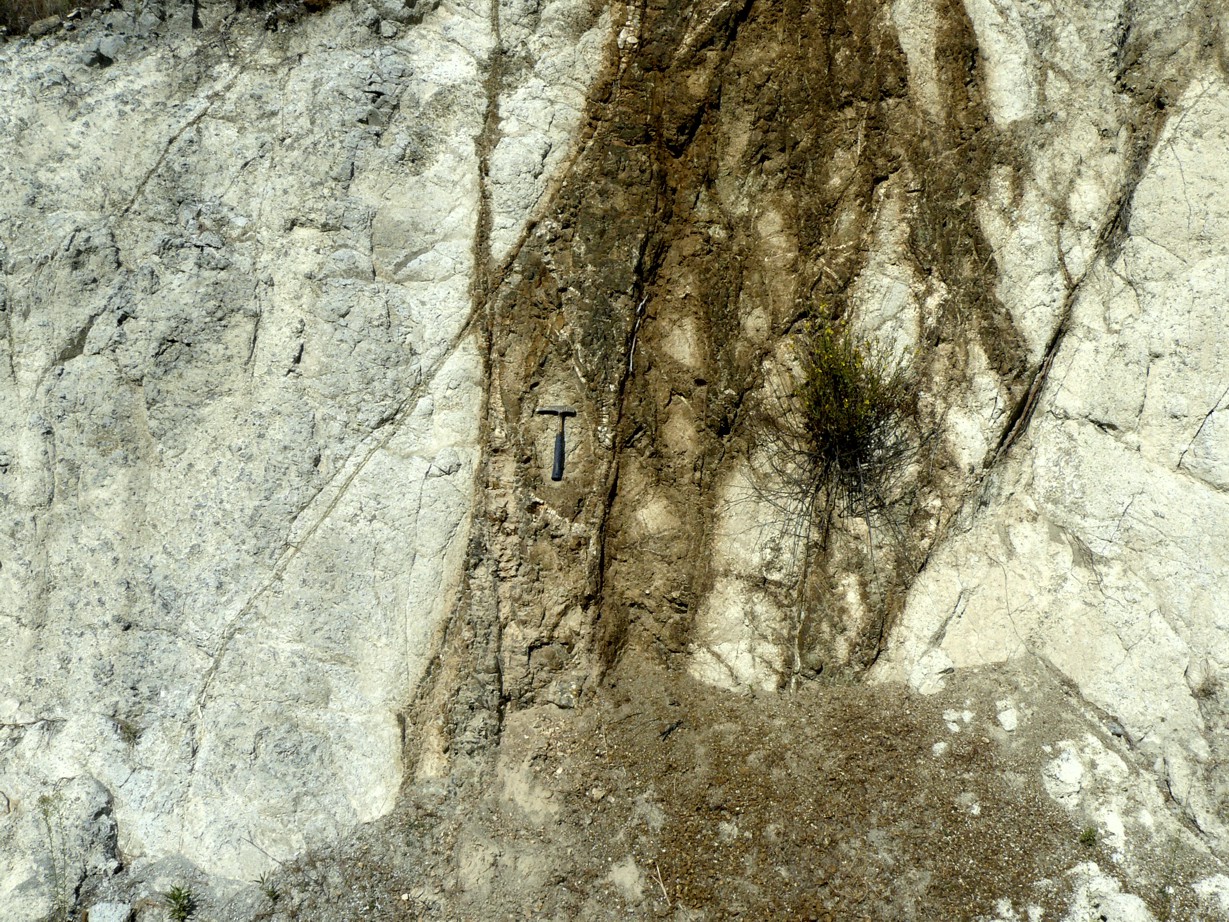 What you're looking at is basically anhydrous rocks (the white stuff) replaced by hydrous minerals (the brown stuff) due to upwelling hot water in the oceanic crust. Above it, now gone, was a hydrothermal vent like the ones in the video.

On land, water does sink deep down as well. As Gordon mentioned in his answer, water is common in oil reservoirs, but it's just about anywhere else. It is particularly rich in sedimentary rocks, that still have some amount of the liquid water that existed during sediment deposition (river, lagoon, lake, etc).

A good property of water in subsurface conditions, is that at higher temperature and pressure it can dissolve and leach metals from rock. This provides a way to move metals around, eventually depositing these metals in localised locations so we can exploit them. Lead, zinc and gold are examples of metals that can be concentrated by circulating water.

Water can also go deep down into the mantle in subduction zones. Water trapped in pore spaces and hydrous minerals can sink hundreds of kilometres down into the Earth. Eventually, the temperature becomes too hot to sustain the water in there and the rock devolatilise: they lose the water (which is a supercritical fluid at this stage). This water is then incorporated into magmas, and erupted in volcanoes. In many volcanoes, especially in arc volcanoes (such as the ones around the Pacific ocean), a major component of "volcanic gas" is actually water vapour.

Temperature is certainly a factor, but it's not that simple. Actually a lot of water does sink into the Earth, mostly as meteoric circulation, but also as deposition of hydrous minerals, trapped pore water, and carried down towards the lower crust in the 'wet sediments' of subduction zones. The latter is the ultimate source of most volcanic water vapor. Of course, pressure increases with depth, and this pressure tends to close up any pores, fractures or fault cavities. So the deeper the water sinks, the less scope there is for water circulation. Also, the deeper the rock, the hotter it gets so it is likely that the tiny amount of water in deep circulation will be absorbed by water-rock interaction to yield a hydrous assemblage of minerals. If the water is heated to water vapour then it is easy for this vapour to move laterally, or upwards (higher porosity), but not so much downwards (little or no porosity). Finally there is the density factor. Water is less dense than rock so it tends to find its own level: gas at the top, then hydrocarbons (if any) further down, then freshwater, then saline water, then no fluid at all because there is no linked porosity for the fluid to occupy.

Not the answer you're looking for? Browse other questions tagged geology hydrology water or ask your own question.

6
Mars maar craters explosive style formation gravitational effect
11
Water on Mars and Earth
11
If water is a renewable resource, why is there water scarcity?
2
Searching for ground water
7
Is it possible to create clouds by pumping water into volcanoes?
5
Are the water year/hydrological year different around the world?
2
How to recharge ground water directly from river water