How much do tides affect earth's rotational velocity?

Many of us are familiar with an exaggerated picture of the Moon's effect on Earth's tides: 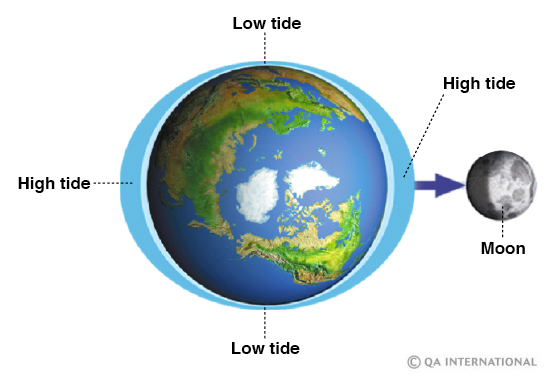 Since the Earth is not uniformly covered with water, however, I imagine that the tidal effect will depend on which part of the Earth is facing the Moon (for simplicity, ignore the Sun's contribution). I'm sure that the tidal effect still affects the Earth's landmasses, but I'm guessing that it would be to a lesser degree (i.e.: the landmasses would bulge out less than the oceans in the image above). Now, by conservation of angular momentum, if the landmasses bulge out less, the Earth should rotate more quickly, hence this question's title.

How does the tidal effect of the Moon's gravity affect the Earth's landmasses differently from its oceans? And how big is this difference?

This question is handeled pretty throughly in Physics site; https://physics.stackexchange.com/questions/214042/earths-kinetic-energy-change

Your question; "How big is the difference?"

Not the answer you're looking for? Browse other questions tagged earth-rotation moon tides gravity or ask your own question.

10
Why high tides occur simultaneously on opposite sides of the Earth?

14
How are Earth's rotational changes due to large earthquakes calculated?
12
Does the gravitational pull of the moon affect the composition of Earth's atmosphere?
4
How often do king tides (perigean spring tides) occur?
9
Was the filling of the Three Gorges Dam's impact on the Earth's rotation rate detectable?
6
Do flights affect tides?
5
How much energy does the Moon transfer to the Earth, does this affect the Earth's surface temperature?
0
How was the Earth's core made?
2
How does rotating water affect turbulence?
2
How large were Mars' ocean tides and to what extent could they keep the oceans mixing and tend to keep salinity uniform? Has this been modeled?