Does a mountain top have higher gravity than a nearby sea-level surface?

Regardless the latitude and centrifugial 'force' is the gravity on mountains higher or lower than at sealevel?

I gave this one some thought and ran some numbers.

The real answer to your question is that you would be lighter because the material that makes up continental plates is lighter than the basalt rock under it. It might not look that way but continents, mountains and oceans are actually balanced with about equal weight under them. Continents are above sea level because of larger amounts of crust which is lighter than basalt. The earth, which is pretty malleable as a whole, adjusts for significant unbalanced changes in mass, it's still rebounding from the melted glaciers from the last ice age for example.

This happens with Mountains too, also slowly, but mountains are formed over millions of years so the adjustment has time to take place. Mountains are formed when two continental plates push against each other, one slides under the other, so both what forms the mountain, and what goes under the mountain is lighter than basalt under the Earth's crust. When you climb a mountain, you're not actually on top of more mass because much of the rock under you is lighter rock. Mountains are actually puffy (I always wanted to say that). If mountains were actually greater mass relative to the (relatively) spherical Earth, then they'd sink into the Earth, which they do to some extent, but, as I said above, Mountains are puffy buoyant compared to the Earth's crust, so the mass is pretty much the same on top of the mountain and at the foot of the mountain. 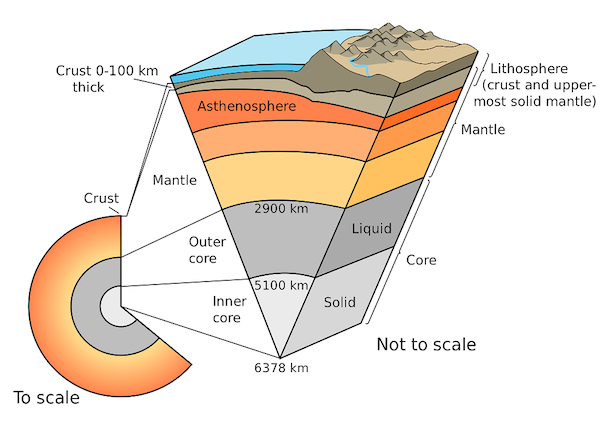 That's not to say the Earth is perfectly balanced, it's definitely not, but the imbalance doesn't appear to follow mountain ranges. Google "Earth Gravity Map" for more on that. Article with pretty picture here.

So, on top of this artificial mountain that, if it was actually added to the earth, it would push the earth down and the earth would adjust it's mass around it over time, but ignoring that, the mountain is 1/1000th the radius of the earth so the distance from the Earth's center is increased by 0.1%

The mass of the mountain, 1.17E16kg is about 1/510,000,000 the mass of the Earth, 5.97E24kg, So we have a mass increase of about 0.0000002% and a corresponding reduction in gravitation by increased distance to the center of the earth (the square of 0.1%), or 0.0001. or, 510 times as much is lost by the higher altitude than is gained by the increase in mass. Now if you make the mountain flat enough, you'd probably be able to increase gravity the tiniest bit, but past a certain point the foot of the mountain is so spread out that the calculation grows inaccurate. The short answer is simply, no, as the other two posters have said. The mass of any mountain is simply insufficient to increase the force of gravity more than it loses by what's lost in the higher altitude.

A 3rd real factor, completely unrelated to your question is air density. Heavier air does create some buoyancy which reduces our weight and the gravity we feel, this effect varies with high and low pressure and temperature, but on an average day at sea level air buoyancy reduces our mass by about .12%, so if you weighed yourself in a vacuum chamber vs your regular bathroom routine, you'd find you weigh about 2 or 3 ounces more for an average person. Climb a mountain, the thinner air, you might gain an ounce due to loss of air buoyancy and that more than makes up for any small changes in gravity, so if you measure gravity by a scale and a weight, things weigh more on top of a mountain, because of thinner air, even though the G force is slightly lower.

The rotation of the earth and the centrifugal force also decreases mass, depending on how close the mountain is to the equator, (see picture). as does the bulge of the Earth around it's equator, but all these changes are tiny.

According to the gravity map below from NASA's GRACE, the mountains you'd want to try for this experiment would be the Andes - they have the highest positive gravity anomaly with sea level quite nearby.

However, lets do a bit of calculation based on this data: The map shows that the coast near the Andes is approximately -20 miligal (a unit of gravitational acceleration) and the centre of the Andes mountain range is around +70 miligal - an overall differential of +90 miligal at the middle of the mountains.

The high point on the Andes is about 7000 metres from sea level. The standard value used in geodesy (from a physics stack exchange answer, link below) is a reduction of 0.3086 miligals per meter of increased altitude. At 7000 metres, that gives us a value of -2160 miligal, or -2.16 gal, which is equivalent to a change of -0.0216m/s/s - significantly outstripping the gravity anomaly on the map (which is modelled on a theorised homogenous spherical earth)

So the answer to your question is no- the mountain tops in areas with highest gravity anomalies will still have (very slightly!) lower gravity than nearby sea level areas 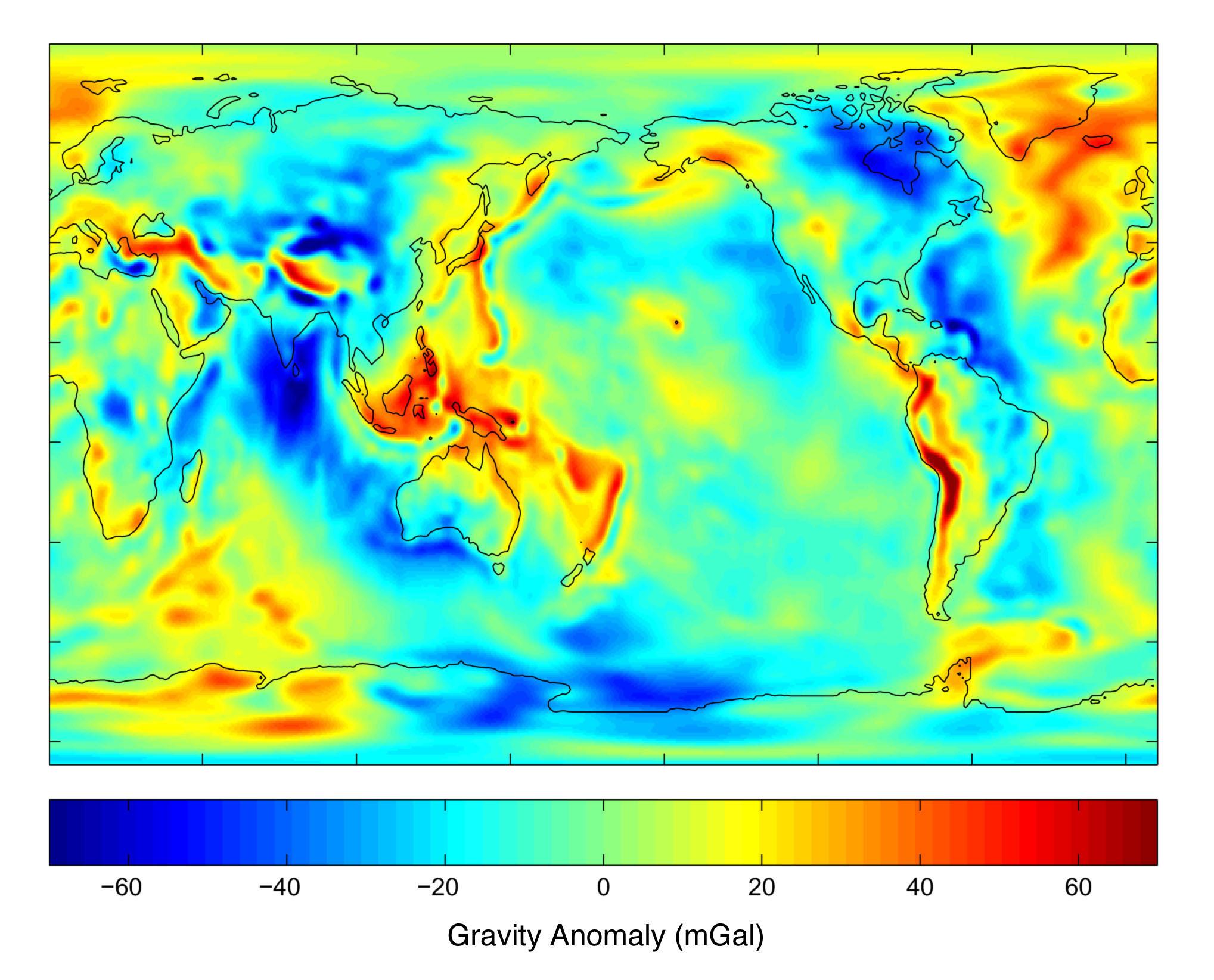 While it is true that, at least over time, Earth will equilibrate so the mountain sinks down, displacing the denser material below, this would also mean that the material just beside the mountain is less dense, and thus there is a similar reduction in g due to this when standing beside it.

And while the increased mass is quite small relative to Earth, you are also a lot closer to it. So you need to consider both factors.

Having mass in addition to that sphere (without taking away from that sphere) would reduce that density requirement. But even if you modelled it as a cylinder where h=d to calculate the mass, and overestimated the force due to gravity by treating it as a sphere/point mass, you end up needing a density of roughly 15000 kg/m^3.

A map of measurements can be found here.

This appears to show that some of the highest values are found in the Andes and in parts of the Hymalayas.

I find this more than unexpected, so I suspect that this is the gravity referenced to some fixed height above sea-level rather than the surface gravity.

Jack Black's answer using a small sphere outside the surface seemed to me too extreme to establish the maximal case for real hills. It seems to me that an extreme model that looked at the maximum effect of a non-equilibrium covering be more definitive. So I have looked at the effect of a "mountain" that was so wide that it could be treated as a covering of uniform thickness across the entire globe.

Taking the field of the Earth at height h above the surface, and without covering we have

This means that there is no realistic chance that a mountainous coating could result in an increase in gravity.

So the situation where hills/mountains might provide gravitational increases would be where we have steep inclines rising out of deep sea, as these provide an increase in density at levels below the sea-level surface. They would still not provide increases above standard gravity unless the total crust thickness in the region was less than average.

Gravity is strictly a function of mass, distance, and gravitational constants. The higher the mountain, the less effect gravity will have. The amount is relatively trivial, but can be computed and measured as a distance from the center of gravity.

As compared to sea level, yes, their are mountain tops with gravity effects trivially higher, mountains with peaks below sea level. There are entire mountain ranges under the oceans.

The most effective geometry for gravity is a sphere. Mountain top is farther from center of earth and the density of basalt or granite is less than the mantle or the earth core. Imagine an oblong earth ultimately similar to a rectangular shape but same mass.
If you would measure the gravity on the tip of this rectangle it would be lees even though it is on top of a huge mass.
The fact that planets are round indicates all the heavy primitive crest unevenness has crashed down to surface but kept afloat by the lateral pressure if adjacent material compressed by higher gravity than what was available at the altitude.

The gravitational acceleration decreases with altitude. A person for example; flying at an altitudde of 30,000 feet; above sea level over say............ mountains will feel more gravity than someone at the same elevation but over the sea. On the other hand, a person standing on the Earth's surface feels less gravity when the elevation is higher than say Gravitational acceleration at height above sea level. Though minute, the further from the Earth's center of mass.

20
What would a replacement for SEGY look like?
10
Is it known what determines the rate with which plate tectonics occur?
12
Temporal Resolution of Seismic data
11
Change in earth mass since the time of the dinosaurs
17
Why does sea level correspond to boundary between oceanic and continental crust?
9
Does the global temperature vary daily (hotter and colder days)?
4
If all the world's ice were to melt, would this shift the earth's centre of gravity with consequential effects on sea levels?
3
Simple way to understand these narrow frequency peaks in recently published “ice shelf singing”?
1
Effects of Centrifugal Force on Gravity Vectors?