Why is ground water rising on these forest rings?

I am seeking a physical explanation for this;

There is huge amount of such a Forest rings in Earth; (Link to Google Maps to one ~400 m Ring)

They range in diameter from 30 metres to 2 kilometres, with the average ring measuring about 91 metres across. Over 2,000 of these forest rings have been documented, but scientists estimate the actual number is more than 8,000. Forest rings in Canada 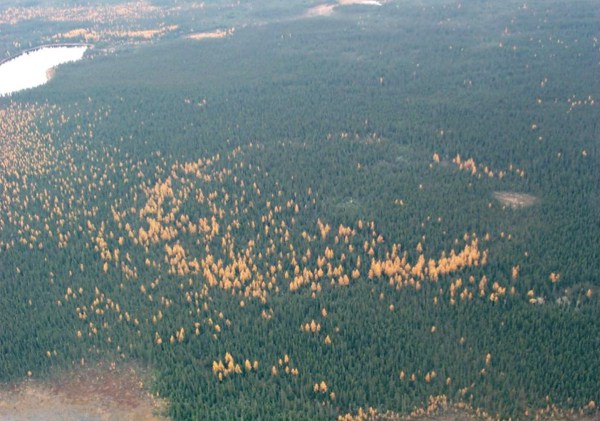 My question relates to following observation;

There seem to be giant electromagnetic disturbances in the soil and subsoil that affect not merely growth of vegetation over large areas but also the level of the water table: it rises “against” gravity within the circle.

Behind the link in the given link it's said more clearly;

But it gets weirder: as Hamilton’s fieldwork also revealed, there is a measurable “bulge in the water table that occurs over the entire length of the forest ring with a profound dip on the ring’s outer edge.” For Hamilton, this effect was “beyond science fiction,” he remarked to the trade journal Northern Ontario Business, “it’s unbelievable.”

What this means, he explained, is that “the water is being held up against gravity” by naturally occurring electrical fields.

And further from The Journal Ontario Business;

Hamilton was testing an analytical technique over a Matheson gold deposit to determine if there was any kind of geochemical surface signal. To his surprise, there were signals coming through 30 to 40 metres of glacial clay.

“We’re thinking there’s no way metals can move through clay 10,000 years after glaciation.”

After ruling out transport by ground water, diffusion and gas, he theorized it had to have been lifted to surface on electrical fields. He applied the same theory to forest rings and discovered that they were also giant negatively charged cells.

Water does react to magnetic field. But the needed $10T$ to make it lavitate is way too much compared to Magnetic field earth provides; it's just $0.00005T$ and we should be talking only some reasonable scale variations here.

QUESTION; Why is ground water rising on these forest rings? The most obvious one would be dissolved gases. And this paper does provide information to this direction. But with closer study, the influence of the gases can be only 0.16 ppm. This means that the density change must come from water temperature. It can't come from the Ice deep below the ground. There is a measured temperature drop in the edge of the ring, but the inside outside of the ring seems to have approx. the same temperature near the soil surface. 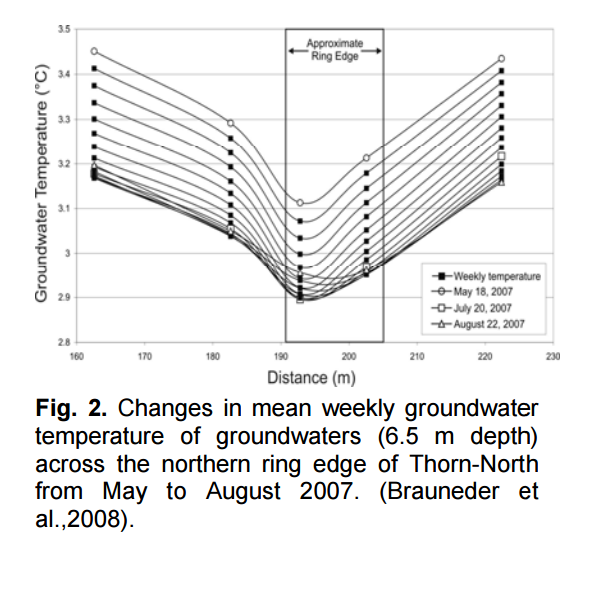 It's hard to see how coverd ice would explain the perfect ring shape (up to 2 km in diameter!)? and the landscape is not even flat. (Pingo's formates in dried lakes/flat grounds) And why there is up to 2 meters soil depression in the annulus? Why there is negative reduction anomaly in the center of the rings? There seems to be some Ice deposits in the ring edge.

To point out the Physical problem of this; Rising ground water with 10 cm on $r=1km$; $A=3140000m2$ area needs quite huge continuous power source.

Nobody knows - yet. But one can say that these rings are too numerous and too regular in shape to be related to either kimberlites or (even more bizarrely) Oklo-type natural nuclear reactors, as some have suggested.

For what it is worth, here is my own hypothesis: The areas concerned are all periglacial in an area of abundant boulder clay. In colder analogues, particularly in Siberia and further north in Canada, such environments contain 'pingoes' aka 'hydroloaccoliths', which are frost heaves in the shape of ice lenses. See, for example, https://en.wikipedia.org/wiki/Pingo . These are feedback processes of circular ice formations which develop in permafrost tundra areas. The circles you refer to are exactly the right shape, diameter, distribution density, and geology to be 'fossil' (melted) pingoes.

Consider what happens when a pingo develops. The ground is highly crazed with fractures over a disk shaped area. If there is brackish groundwater in the area then the ice freezes as pure water, thereby partitioning more saline groundwater to the perimeter - thereby leaving a high-salinity ring of brackish water which subsequently stunts tree growth (as you observe). When the ice eventually melts the pingo collapses to appear much like the surrounding boulder clay, but with a fractured and much more porous texture. Wherever there is a confined or semi-confined aquifer - which is very common because thick layers of impervious boulder clay behave as a confining layer - there will be a tendency for groundwater to rise as artesian (non-overflowing) conditions. Hence the 'bulge' of the apparent water table, which you also observe. If this explanation is correct then the ring would be a natural exit and pressure release point for confined groundwater, and hence for entrained methane. Methane builds up under boulder clay, especially where the clay overlies peat deposits, such that oxidizing organic matter reduces the water. Moreover, this redox contrast, between surrounding oxidized near-surface/perched groundwater, and the reduced groundwater exiting from the ring, would also influence the nutrient availability, thus contributing to the ring of stressed vegetation.

As for the change in electrical potential, that is easily explained as deriving from the contrast between normal and residual more saline groundwater. Also, if the pingo was weathered during its evolution, then there would be a difference in clay content, which would also contribute to the electrical differential. Indeed, that is to be expected when a hill (the pingo) is drained by meteoric water, taking with it any dispersive clay (another common feature of boulder clay).

So no, sorry to disappoint, but the explanation is probably just normal periglacial hydrogeology - no gold deposits involved.

The test to verify this hypothesis? It needs someone to run a traverse across such a ring, measuring the hydrostatic pressure variation (horizontal and vertical), soil salinity, and soil clay content.

3
Why do buoyantly rising mantle minerals melt, yet buoyantly rising atmospheric waters condense?
1
Forest rings shape regularity
4
Why is it said that Amazon creates 20% of the oxygen production of the world, when it accounts with less than 14-12.8% of the forest area?