What would be the temperature of earth if there was no atmosphere?

I do know that the atmosphere protects life on Earth by absorbing ultraviolet solar radiation, warming the surface through heat retention (greenhouse effect),and reducing temperature extremes between day and night (the diurnal temperature variation). I wonder what temperature would earth reach if there was no atmosphere?.

According to Wikipedia an approximate average surface temperature for a bare earth is 274.5 K. This scenario is quite reasonable in my opinion as stripping the atmosphere without changing much else would (on a geological timescale) rather quickly result in a bare earth without ice caps or vegetation, causing circumstances quite close to those on the moon. (I assume the Earth's magnetic field protecting both the atmosphere and life below it has disappeared as well)

This is estimated by comparing the black body radiation of the Earth and Moon, which is then corrected for albedo (fraction of incoming radiation that is reflected) and emissivity (ability of a material to emit radiation), which are properties of a material. Since the Earth and moon are both at the same distance to the sun and made up from the same material on average, measurements of the albedo and emissivity of the moon can than be used as estimations of these properties for the Earth.

The black body radiation of the sun is calculated with the Stefan-Boltzmann law:

$P_{\text{S,emit}}$ is the emitted energy by the sun, $R_S$ is the radius of the sun, and $T_S$ is the temperature of the sun. The fraction of this energy recieved by the Earth is then proportional to the circular surface area facing the sun and the energy density at the distance $D$ between the Earth and the sun.

$R_E$ is the Earth's radius. Using albedo $\alpha$ the absorbed energy can be calculated:

Applying the Stefan-Boltzman law to the Earth, corrected for the emissivity $\overline{\epsilon}$, the emitted energy is then:

Finally we only need to insert the correct values:

Note that there are many factors that can cause local and temporal variations. For example, incoming radiation varies with latitude and season, and if the removal of the atmosphere would be caused by a dying sun that grows to engulf the earth temperatures would be much higher than this. All in all, to account for all those factors a very large model must be made that can analyse the influence of each factor, including the decrease in temperature of a dying sun etc., but that would be nearly impossible to build if only for the resources it would take to do so.

Since one of the most contested factors is the albedo after the atmosphere is removed the following graph shows how the average surface temperature changes with albedo. At an albedo of zero all incoming solar radiation is absorbed, while at 1 all radiation is reflected. Note that the temperature of 0K is an effect of the assumed equilibrium between incoming and emitted radiation, which will not hold at that point. As said above, the albedo for a bare earth will be approximately 0.1, while current values on average range from 0.3-0.4, largely contributed to by clouds. An average for the albedo of the Earth in its current vegetated state, but without clouds I haven't been able to find.

As stated by @ardie-j in his answer, another possible fate of the Earth could be that it gets covered in ice, as another Snowball Earth Event. In that case the albedo would rise to levels ranging from 0.4-0.9, resulting in a drastically cooler Earth. 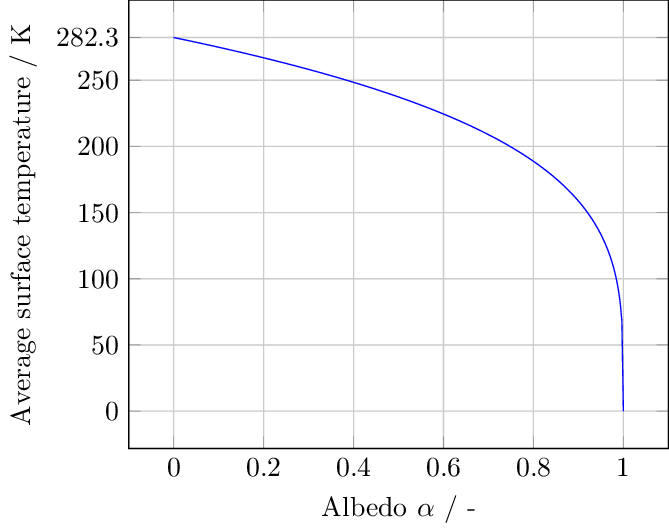 The earth would be covered in ice. That is the only answer you need.

Those who seem to think it would be fried or barren neglect to understand the difference between the atmosphere and earth's protective magnetic field. If we had no magnetic field, in addition to many, many other problems, our planet would fry regardless of the presence and chemical composition of an atmosphere. Without an atmosphere and greenhouse gases, however, the planet would freeze. With too many greenhouse gases under other optimal climate conditions, it would look like Venus.

Please don't trust someone who gets their answers from Wikipedia. If you prefer more mass-media resources, you can cite the following articles: "Snowball Earth" Confirmed: Ice Covered Equator (National Geographic, 6 Mar 2010)

Alternatively, you can use more science-based research: Did the Snowball Earth Have a Slushball Ocean? (NASA GIS, Oct 2002)

9
How does the Sun heat the Earth?
3
What are the major contributors to the amount of infra-red emitted by the earth?

7
How can we calculate the temperature of the atmosphere, including the greenhouse effect?
4
What was the density and composition of Earth's atmosphere during the Cretaceous warmest period?
13
Does the magnetic field really protect Earth from anything?
1
How much energy is required to hold the earth’s atmosphere up against the forces of gravity?
3
Can spraying sulphate particulates in the upper atmosphere to lower Earth's temperature have side effects?
2
Why don't dewdrops form on a cloudy night?
4
How hot the earth will be if we have 20% CO2 in the atmosphere instead of ~0.04? and how cold would it be if doesn't have any CO2?
8
Is there a simple model for the interaction between greenhouse gases and infrared radiation?